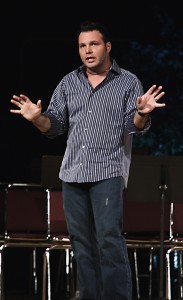 I’ve written quite a bit about churches like Mark Driscoll’s Mars Hill and the concerns I have about a lack of accountability, given that they’re not part of a denomination or other larger body of oversight. Churches led my ministers like Driscoll and John Piper seem to be independent, yet pressing a surprisingly consistent agenda in many ways, when you consider they’re not connected.

Well, maybe a little bit connected, it turns out.

I have to give evangelicals due credit in one way at least; they’re highly inventive and adaptive when it comes to how they reach people. In the publishing world, it’s inevitably an evangelical house or group that has the coolest new media, the hippest looking new graphic novel or web-based ministry. We mainliners and progressive independents always seem several steps behind when it comes to branding.

But of course, underneath the veneer of something new lies the same old evangelical doctrine. And this is what bothers me more than my personal objections to most evangelicals’ theology. It seems opportunistic to me, if not disingenuous simply to change the packaging on an old message, just to grab people’s attention. It’s a little bit like looking at my grandfather decked out in Abercrobmie & Fitch swag, while still checking behind my ears for dirt.

The missional church movement, however, seemed to be a different animal. Emerging from the imaginations of a a handful of mainliners and independents (and yes, even a few evangelicals), the emergent church seemed something refreshingly new. It didn’t just look different; it spoke and acted differently. It seemed to put relationship ahead of doctrine and human beings ahead of church agendas. It acknowledged the deep senses many of us already had that the Body of Christ was not so much bricks and mortar, but rather flesh, bone, heart, mind and spirit, particularly when two or more of these converged.

Servant evangelism was valued over saving souls. Compassion meant more than conformity. Relationship was more important, it seemed, than religion.

It’s not surprising that evangelicals took notice when this movement began to take hold.

Enter the Acts 29 Network, established and run by – you guessed it – Mark Driscoll himself.

Now, before you go running for your Bible, let me save you the trouble. There are only 28 chapters in the book of acts, much of which is dedicated to the establishment of early Christian churches. The idea behind the name is that this is the “next chapter” in the life of the church.

On the surface, Acts 29 sounds much like the emergent church movement, in that it claims to be a network rather than a denomination, and their website claims that their values are not meant to supersede those of any particular church’s doctrine. They state that their purpose is to create relationship and to share resources, much like the emergent networks tend to do, which makes a lot of sense to me.

But there’s plenty that’s bothersome about it at the same time.

First of all, a glance over the Leadership roster makes one thing clear: middle aged white guys are in charge here. Of the 25 people shown on the team, 22 of them are white males. All positions of top Board and administrative leadership are white guys, and of the executive staff, there is only on African-American.

Yes, there is one woman in the mix; she’s the secretary. And they do have an Asian on staff handling communications.

Then there’s the value statement, most of which is consistent with a typical evangelical church vision. However, this one point stands out, in which Acts 29 commits itself to “…get behind the men (emphasis added) who are planting churches by…networking with men in different denominations and networks for the kingdom good of the city.”

Translated: no penis, no dice.

They are clear in several places that they align themselves with the National Evangelical Association, taking a page straight from the evangelical playbook. They even have an entire web page dedicated to outlining their group’s doctrine, which seems a little strange to me since on the home page they say they’re not interested in challenging the individual doctrines of member churches. But if you want to be a member, you’d better be ready to align yourself with the 1,356-word doctrinal statement.

Maybe I missed a memo, but in my experience, the words “emergent” and “doctrine’ don’t exactly sit well together. Nonetheless, many evangelical publications regularly tout Acts 29 as an “Emergent Church network.”

Finally, I have to take issue with their definition of “missional church.” If this were baseball, I’d say they’re batting .333 in this area. Here’s how they describe themselves as missional on their site:

The second point definitely aligns with the intent of missional church. However, as I mentioned, evangelicals tend to do this only on the surface, while holding true to the same old doctrine and theology. So really, it ends up only being a superficial adaptation. This is evident in the first and third points which, again, could have been plucked straight from the docket of an agenda from the Southern Baptist Convention or the National Evangelical Association.

I’m all for congregational and denominational change. But when it’s the same old white guys preaching largely the same old agenda, it smacks more of a desperate power grab than a genuine longing to better know and connect with the world around us.

February 25, 2012 A Tapestry of Belief and Experience
Recent Comments
19 Comments | Leave a Comment
"When people who are not physically handicapped use the handicap stall, I just say to ..."
Aelxa Hill When the Golden Rule Fails
"I’m glad there is a end if we are suffering for a uncure thing I’m ..."
disqus_fyy1HxoUzu Thank God for DEATH: Could Anything ..."
"Church is boring. It should lose its tax breaks."
Ivan T. Errible The Embodiment of God (Fast of ..."
"This was an awesome post! It really gave me a new perspective on relationships and ..."
Bianca Williams Loss and Redemption in Relationships
Browse Our Archives
Related posts from Emergent Village