MISTAKES OF THE BISHOPS–PART ONE

MISTAKES OF THE BISHOPS–PART ONE June 15, 2019 Monsignor Eric Barr, STL 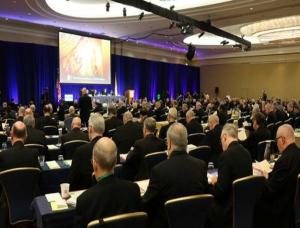 The U.S. Bishops had an unimpressive week at their biannual meeting.  That means this first paragraph will be boring.  But take heart!  It shall get better.  They approved three measures to help alleviate last year’s iteration of the sex abuse crisis, namely, the ex-cardinal Theodore McCarrick controversy.  First, they approved a way for a bishop to discipline another bishop within his diocese.  Next, they approved norms to codify Pope Francis’ February Conference on Sex Abuse results.   And finally, they approved a non-binding agreement to deal with bishops and have the same expectations of bishops as they do of their priests and deacons.  Yawn.  Boring and not very satisfying, and fairly useless in fixing the bishops’ mistakes concerning the sex abuse crisis.

FIRST, LET’S KILL ALL THE LAWYERS–OKAY, NOT REALLY

For sure, the measures will be somewhat helpful.  But they do not undue the first mistake the bishops ever made concerning the issue of sexual abuse. That was the embrace of the legal system, both ecclesiastical and civil, as the first response to the crisis.  Sexual abuse by priests did not begin in 2002, but the Church stood on the cusp of a major decision that year.  How would the episcopacy treat this concern?  The bishops tried their best but failed.  Why? Of all the choices before them on how to handle the situation they decided to lawyer up.  They forsook their role as shepherds and cast their lot with lawyers, seeing themselves as CEOs with a need to protect the institution.

What happened next was not the lawyers’ fault.  They were simply doing what they had been asked to do by the Church.  Apply civil law, protect the institution, and keep the amounts dictated by lawsuits low enough to not bankrupt individual dioceses.  The bishops, of course, also tried to apply pastoral justice, trying to care for the victim and punishing the perpetrator.  It did not work out very well.  Casting their lot with the lawyers simply exacerbated a trend that had appeared decades before.  The bishops were relinquishing their role as shepherds and becoming CEOs, executives of their individual companies (dioceses) under the umbrella corporation of the Universal Catholic Church. Simply take a look at the United States Conference of Catholic Bishops’ meetings.  In their black suits and with somber demeanor, the bishops do not look or act like shepherds.  They look like Chief Executive Officers at worst and at best like those elderly bankers in the original Mary Poppins movie, totally out of touch with real life, anxious only to protect the wealth of the bank.  That sounds terribly harsh but the optics are clear–these meetings stress law and order, not pastoral care and practice.

A QUEST FOR ORTHODOXY DERAILED BY AN EMBRACE OF LEGALISM

How could such a thing happen?  When Pope St. John Paul II became pontiff, he and his chief theological adviser, Cardinal Joseph Ratzinger, showed immediate concern over the lack of orthodoxy particularly in the West.  They were right to be concerned.  The United States received special attention.  Many bishops back then permitted liturgical and theological abuses.  In an attempt to wipe out those aberrations, the Pope began to appoint very orthodox bishops.  Some came from schools of theology, but many came from the cadre of Canon Lawyers, church lawyers who applied Church law within the dioceses.  These were, on the whole, good men but they became a particular type of bishop. Reliably orthodox, they were not particularly pastorally sensitive.  Their fall back position rested with Church law.  It was precise and clear but flexible enough to be applied in real situations.  But it was not Scripture or Theology.  It was law and it was what they turned to first in times of trouble.   Just like civil law it was very protective of the institution that created it. Church law would always have to have been consulted, but it should not have been the first tool used.

When cases of sexual abuse occurred, the bishops were reflexively defensive.  Their first move was to contact civil lawyers and the whole resolution process therefore began with a legal framework rather than a pastoral one.  Victims and their families did not find a receptive audience at the chancery.  They became plaintiffs and the Church became the defendant and everything began in an adversarial relationship.  Money was seen as the basis of true justice and victims who might have been satisfied and healed by the loving care of a Church which understood their hurt and realized its own failings to root out abusive evil began to see legal settlements as the path to healing.

But there was little healing because money, though it can do a lot of things, can not bring peace of mind or healing of heart.  There was no real attempt at reconciliation, and when the legal gymnastics were over, Church and victim often parted ways, their former relationship utterly destroyed.  Both sides appeared paralyzed.  Bishops who took the route of Church Law showed little creativity to change their behavior.  They seemed unable to embrace the pastoral shepherding role for which they had been ordained.

What is clear in hindsight was not always clear at the moment of decision making or in the midst of a crisis.  However, we now know the results of the bishops’ actions and it has pushed the Church in the West close to catastrophe.  Until the McCarrick controversy of last year, most defenders and critics of the Church turned the laser light of judgement upon those priestly perpetrators who caused the mess.  If only that problem could be cured, the institutional Church could get its act together and put the muddle behind it.  But once the McCarrick obscenity unfolded, everyone began to realize clearly that the root problem rested with the way bishops handled their authority and their role as shepherds.  The Church could get rid of every clerical abuser but the cancer would still remain, namely, the abuse of authority by bishops who had lost touch with their charism as shepherds of the flock. And what was worse is that the candid acknowledgement of the real problem wouldn’t solve anything.

There was simply not a way to discipline those bishops who continued to abuse their authority.  Of course the Pope could get involved, but that should be the in extremis solution.  Something else has to be created to call the bishops to accountability.  What happened this past week at the biannual meeting of the bishops was not that.  Their measures were stop gap attempts which will help a little but offer no permanent solution.  That sounds hopeless and it is, so long as the bishops continue to act as Chief Executive Officers and see civil and church lawyers as the way to solve both the authority problem and the sexual abuse crisis.  Only by reclaiming their role as shepherds will they be able to move forward in forging a renewed relationship of trust with the people they are supposed to lead.