The Two-Edged Sword Of Hypocrisy–The Archbishop And The President

It was awkward, there on the public sidewalk outside the Church of the Presidents, holding a Bible.  The next day, it wasn’t. That day, it was truly a moving private moment with a man and woman kneeling in front of a relic of Pope St. John Paul the Great.  I’m talking about the two photo-ops that caused such consternation recently: the President holding up a Bible in the midst of a riot torn city, and the President and First Lady kneeling at Washington, D. C.’s shrine honoring the late pope.

Awkward or moving, it doesn’t really matter.  The trolls were out decrying the cynical photo-op. (I wonder, which pictures of the president are not photo-ops?) The hypocrisy comes in with a Catholic archbishop and an Episcopal bishop wailing and keening over the inappropriateness of it all.  The Episcopal bishop was incensed she hadn’t been asked permission. Her allies in the press bemoaned the supposed fact that peaceful protestors had been tear-gassed out of the area so the president could walk from the White House to the church. Catholic Archbishop Wilton Gregory said, “I find it baffling and reprehensible that any Catholic facility would allow itself to be so egregiously misused and manipulated in a fashion that violates our religious principles.”

So far, so good.  Some religious leaders and their press allies didn’t like what Trump did.  That’s their perogative.  Until lies and convenient memory lapses come in.  That’s when hypocrisy raises its ugly head.  There was no tear gas the afternoon the president walked to the church. While there were peaceful protestors, there were also violent ones who were throwing frozen bottles of water and other objects. One wonders how many projectiles make up a convincing case for self-defense. Needless to say, the riot police, at the order of the Attorney General, not the president, moved the crowd back for the president’s safety. Sounds reasonable? Of course.  Unless you are the press who confabulated another storyline–that of the arrogant president who cares little for his people. 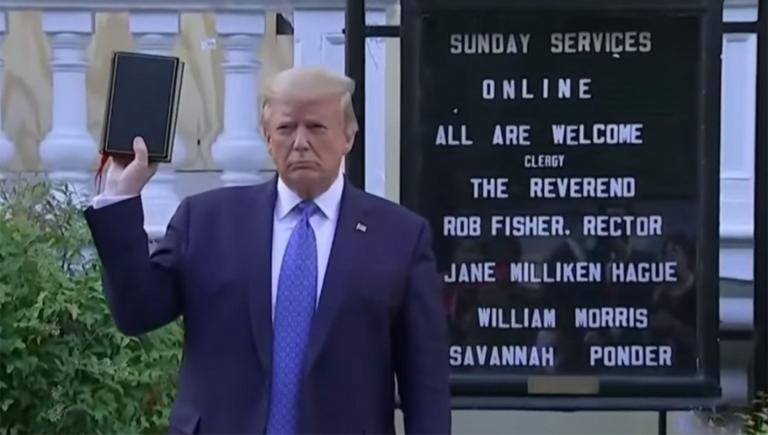 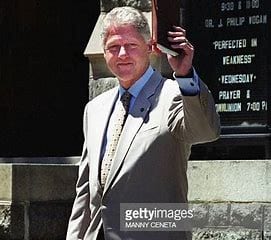 They laughed at the president holding his bible. Such hubris, such fakery, such presumption!  Yet they didn’t laugh when Bill Clinton, held up his bible in exactly the same way in front of a church when he was president. His sins were overlooked. Trump wanted to take bible and person and stand, on public land, in front of that church after it had burned the night before, to show that goodness, law and order would prevail. He needed no one’s permission. He walked to show the rioters they did not own the land. 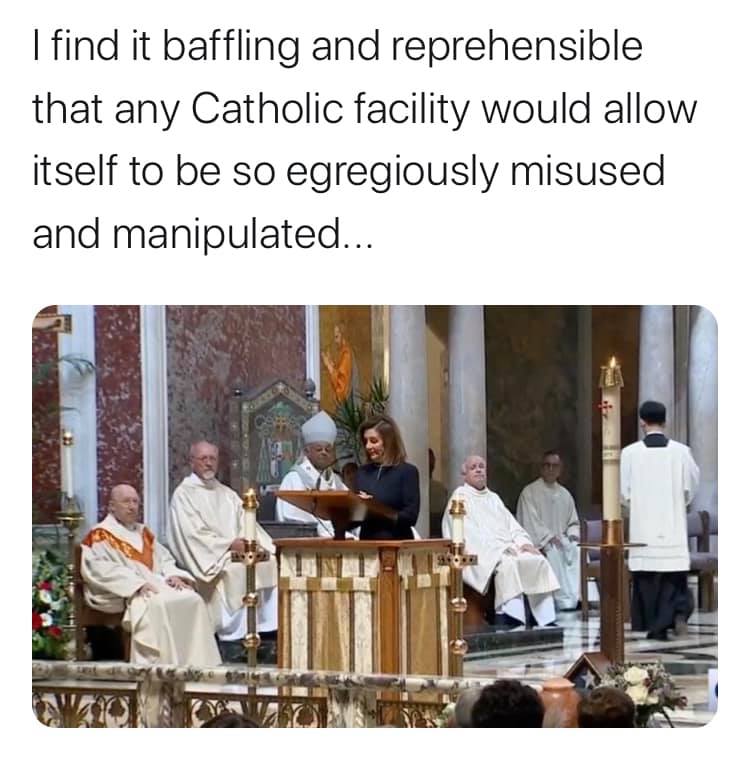 The next day he went to the Pope St. John Paul Shrine. It was a visit set up long ago to coincide with the signing of a religious freedom proclamation.  The date was chosen because it represented the anniversary of Pope John Paul’s trip to Poland. Archbishop Gregory had to have known about it for quite some time. A presidential visit to the shrine would have been on the archbishop’s radar. So clearly, the president isn’t the only one who can use a photo op to his advantage. The archbishop’s outrage was used to make a negative, partisan statement on Trump. But the hypocrisy truly lies in what outrages the archbishop. Less than a year ago, he presided over the great reporter, Cokie Roberts’, funeral. As the picture shows, who should give a little eulogy and reading but Nancy Pelosi, the Speaker of the House. A supposedly fervent practicing Catholic, she has easily done more harm to the Catholic faith and the lives of little children than anyone else in public life. Yet, not a peep from his eminence. That was a photo op par excellence with which the archbishop was perfectly fine.  That’s hypocrisy and it lies heavy on an archbishop, whom up to now, I truly respected. If he was incensed with what the president did, then let him send a private letter and preserve a relationship where he might have more influence in years to come. But no! In thunder and lightning, he had to propound his discontent, even though his moral compass seems to be much more sensitive to Republicans than Democrats, to a President than the Speaker of the House.

President Trump is a force of nature, and he can be chaotic. But during his presidency he has been very clear on the role of religion in public life and the importance of religious freedom. But some people viscerally oppose him no matter what he does.  I have given up trying to convince them that he has any redeeming quality.  They will not hear of it. But I will continue to point out facts.  And I will continue to judge harshly the hypocrisy of religious leaders and the press who condemn him for that which they praise others.

I am reminded of Martial’s famous epigram, loosely translated from the Latin by a cheeky Oxford student, but apropros here.

But this I know, and know full well, 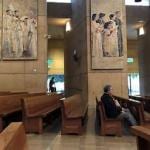 June 17, 2020 Catholics: They Are Not Coming Back...Unless...
Recent Comments
0 | Leave a Comment
Browse Our Archives
get the latest from
Thin Places
Sign up for our newsletter
POPULAR AT PATHEOS Catholic
1