What Bill Maher Doesn’t Get About Faith

I enjoy watching “Real Time with Bill Maher.” Though I rarely agree with him, he’s refreshing in that you know he’s never toe-ing a partisan line or saying what he thinks someone wants to hear. He also has on a variety of guests — everyone from extremely conservative to extremely liberal — which promotes lively, engaging discussion on the hot issues of the day.

Bill is a well-known atheist and criticizes those who subscribe to any religion, saying he can’t understand how otherwise smart people could believe in such hocus pocus. This past Friday, he apparently accidentally had four Christians on the show. Woops! When the conversation delved into the truth about Jesus, he was clearly irritated and wanted to move on from this “magic guy in the sky” conversation.

Despite his clear attempt to rush past the subject of Jesus, his guests seemed almost humored by the fact that they were all in on a little thing called faith that Bill just doesn’t have. It made a Christian viewer like myself feel bad for him. There’s freedom in faith and the knowledge that we aren’t all there is — and that thank God there’s something more than this short, sinful life on earth. Eighty years if we’re real lucky — then into the ash heap of history we go.

Erick Erickson mentioned that his wife currently has cancer and his faith in God brings him great comfort. James Carville mentioned that it’s “hard” to have certainty about anything but it’s a “framework.” I think what he meant was, having faith. Darryl Davis, the black man famous for befriending and converting Klansman out of the KKK, spoke out Jesus lighting the way for people out of darkness.

Maher then delved into the hypocrisy of Christians, saying a majority of them voted for Donald Trump — and don’t support the right issues. But he hit the nail on the head — that we are all fallen, sinful and in need of redemption. Christians ARE hypocrites because we are all sinners. We try and we fail and we try again…and we know we can’t do it alone.

Side note: I don’t think voting for Donald Trump was a sin — at least not on a general level (for personal reasons, it may have been for some.) Many people voted for Trump because they believed he would bring forth policies that would ultimately help the most people and advance causes they believed in — even if his own personal character and demeanor weren’t so hot. That whole conversation is another post for another day, though.

That being said, Maher should know that yes, Christians are sinful. Yes, they are hypocrites because we are fallen and without God, are nothing. It’s not “dumb” to believe in God. It’s actually takes a lot of courage to say “yes” to God and trust that this life isn’t all there is. To believe that the sunrise and the galaxies aren’t an accident, that we ourselves are not accidents spinning out of some black hole into beating hearts and miraculous brains and sophisticated life.

It’s not easy to have faith. It’s not a crutch, it’s a foundation. It’s not a weakness, it’s a strength. Less than 7% of the United States is either atheist or agnostic. That means the other 93% of us have faith of some kind. We know, inherently, that life is bigger than these 80 years. We know it especially if we someone we love gets a whole lot less than that. It must be and we have a God that tell us through the Bible, through prayer, through experience, through history, through miracles, through His death and Resurrection that it is.

I pray Maher will know that incredible comfort and truth someday. 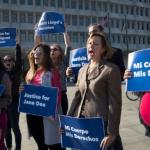