My Praise for Longenecker’s Remember the Poor 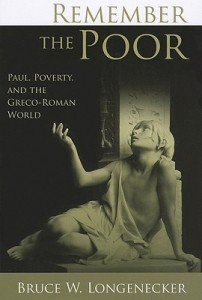 A couple weeks ago, Michael wrote a brief post noting the new book by Bruce Longenecker called Remember the Poor: Paul, Poverty and the Greco-Roman World. I picked a copy up at SBL and began reading it with great interest. This topic is important to me and very timely given the discussions being had on the mission of the church in response to Kevin DeYoung and Greg Gilbert. One of the primary observations they and others of their ilk make is the lack of concern about issues of justice in Paul’s apostolic work. However,

If Bruce Longenecker is correct, then the thesis of the DeYoung and Gilbert book is baseless.

I can’t commend this book enough. It is a scholarly, yet accessible treatment of Paul’s views and practice of mercy among the urban poor. I hope that DeYoung and Gilbert, and others of like mind, will order this book immediately and read it carefully.

Here’s the most important insight the book makes that truly undermines a narrow understanding of the gospel and the mission of the church that does not include justice and acts of mercy: The Jewish social space into which Paul’s churches were born and continued to exist.

The Jewish context of the churches Paul and his partners founded in the Greco-Roman world should inform how we understand the work of the churches Paul left behind. Essential to the theological traditions of ancient Judaism and the Jesus-movement, was the concern for the poor. Jewish diaspora communities were active in charity as an essential expression of their worship of God and there is ample evidence in the Epistle of James to show the essential place of caring for the poor in the religion of early Christianity (Jam 1:27).

We need to show more sophistication in handling of the Pauline evidence. In my experience, one regularly omitted element of this is the recognition that Paul was not founding a new religion, but as the envoy of Israel’s Messiah, he was extending the promises of Abraham, Israel’s father, to the nations. The book of Acts clearly puts Paul’s work within the Jewish social space of the Greco-Roman world (cf. Acts 18:14-16). This should be our frame of reference when attempting to discern the apostolic communities both past and present.

It was through the vehicle of the gentile-friendly wing of the Jesus-movement (in which Paul was a key and instrumental player) that Judaism’s concern for the poor spread throughout the cultures of the ancient world, giving visibility to the poor in an unprecedented fashion. In that sense, the preceding chapters recount on crucial episode in the story of how Judaism bequeathed to the world a concern for the economically poor by way of the early Jesus-movement – an episode that features the controversial figure Paul. He imagined urban Jesus-groups to be miniature oases of eschatological refreshment amid the harsh economic conditions of the Greco-Roman world (300).

Gupta and Cohick appointed to New Living Translation...
Dr. Lynn Cohick (Provost, Professor, Northern Seminary) and I (Nijay) both accepted...
view all Evangelical blogs
What Are Your Thoughts?leave a comment
Copyright 2008-2021, Patheos. All rights reserved.