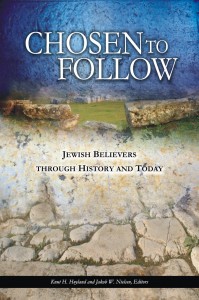 As many of you will know, I along with David Rudolph just published a book on Messianic Judaism called an Introduction to Messianic Judaism. I am pleased to introduce you to another new book on the same topic published by the Caspari Center, Chosen to Follow: Jewish Believers Through History and Today.

The Caspari Center for Biblical and Jewish Studies was founded 30 years ago and this volume was published to celebrate the three decades of their ministry on behalf of Jewish believers. The editors, Knut H. Høyland and Jakob W. Nielsen, make the point about the center that “From the beginning, … [it] existed to strengthen and support the Messianic movement, especially in Israel, primarily through providing biblical and practical training for congregations and lay leaders” (vii). On its website the Caspari Center itself states,

The Caspari Center for Biblical and Jewish Studies is an evangelical resource and education center for training, discipleship, and academic research and study, where Messianic Jews and Gentile Christians work together to strengthen and support the movement of Jewish believers in Jesus in the midst of the universal church.

The Caspari Center is an evangelical ministry that affirms the Bible as the true and authoritative guide for faith, doctrine, and life. We believe that the Apostolic and Nicene Creeds and the Reformation principle of justification by faith in Jesus the Messiah alone are vital for properly understanding the Scriptures.

The Caspari Center and the book, Chosen to Follow, seek the same basic thing we are trying to do with our book: facilitate and encourage theological discussion around the key questions and issues surrounding Jewish identity today in relationship to Judaism and Christianity. So this new book is a welcome partner in the discussion. In fact a few of the contributors to our book, have new essays in Chosen To Follow: Anders Runesson, Daniel Juster, and Stuart Dauermann.

The first part, The Early Jewish Believers in Jesus, contains some very important research and theological reflection on the presence of Jewish believers in the earliest days of the church as well as throughout centuries in spite of the predominately Gentile churches’ attempts to irradiate Jewish identity within its borders. Expect in the earliest period, however, inclusion of Jews within the church meant a loss of distinct Jewish identity as Helene Dallaire documents. Oskar Skarsaune in his essay, “Who Influenced Whom? Contours of a New Paradigm for Early Jewish-Christian Relations”, provides an important discussion of the interdependency of early Rabbinic Judaism and Christianity in light of the most recent research. He goes so far as to even revise some of his earlier work in the excellent volume In the Shadow of the Temple (IVP). Particularly provocative is the idea that not only is Judaism the background for Christianity (which is a standard view), but also Christianity was the background for Rabbinic Judaism.

The second part, The Modern Jewish Believers, contains interesting historical and contemporary discussions of beliefs and practices of Messianic believers. Discussions of the Messianic Jewish movement globally and its predominate forms in the North American and Israeli context are emphasized. Of the essays in this section, one of the most interesting is the impassioned support of Postmissionary Messianic Judaism (a term coined by Mark Kinzer) in the Land of Israel by S.H.R. Ben-Haim. Also worthy of note is the essay on the civil rights of Messianic Jews in Israel. The authors Michael Decker and Amy Cowen write of “a state of systematic illegal discrimination against Messianic Jews and other religious minorities in Israel”, a situation however which they seem to think is starting to change for the better.

In the final section of the book, Theological Issues Facing Jewish Believers in Jesus Today, contributors tackle significant issues relevant to the Messianic Jewish movement today. The essay that begins the section is strong written by Richard A. Robinson the senior researcher with Jews for Jesus. He critically assess attempts by recent elements of Messianic Judaism to assert the necessity of some kind of Torah observance as the form of discipleship of Jesus the Messiah for Jews. It is safe to say, that Robinson is skeptical of streams of Messianic Judaism of the UMJC variety who believe: Messianic Judaism as a movement of Jewish congregations and groups committed to Yeshua the Messiah that embrace the covenantal responsibility of Jewish life and identity rooted in Torah, expressed in tradition . . .” Robinson raises critical questions of this approach. In significant contrast to Robinson’s piece is Stuart Dauermann’s essay affirming the view that Jewish believers in Yeshua should pursue a form of halachic Torah practice.

The other essay I’ll mention among those of this final part of the book is Lisa Loden’s piece on Messianic believers and Palestinian Christians: “Towards Reconciliation: Messianic Jewish Believers and Palestinian Christians”. She paints a very depressing picture of the current situation. Loden remarks “In the context of relationship between Messianic Jewish believers and Palestinian Christians in Israel and the Palestinian territories, the family of God is wounded and broken. Relationships are damaged and distant. The situation is much like the coming of the kingdom of God. It is simultaneously present, ‘already here’, and ‘not yet’ fully realized'” (220). Loden notes that the one thing that should unite and bring reconciliation is the Scripture since both sides take it to be the final authority for faith and practice and seek to live in accordance to it. But there are fundamentally different readings of the same text that produce deep division. I was disappointed that Loden didn’t provide more of a “road map” to the reconciliation. Appealing instead to the embrace of the “simplicity of the gospel” is all well and good (and right!), but what this looks like in practice is almost beyond imagination, which maybe why she was not able to offer more. Personally, I think this issue is one of most crucial issues facing Messianic Judaism in the Land of Israel. I am encouraged by the ministry called Musalaha, a Messianic Jewish initiative which seeks to foster dialogue and reconciliation. Also see Akiva Cohen’s discussion in our IMJ, pgs. 113-14.

I highly recommend Chosen to Follow for those who are interested in the history of Jewish believers in Jesus and of the modern Messianic Jewish movement. The 15 essays provide a wide-ranging overview of Jewish believers in Jesus both past and present. What’s more, it reveals the diversity of the discussion among those closest to the movement. And in true Jewish fashion allows the differing perspectives to sit side-by-side. One weakness I discerned when reading the book, was the lack of a clear definition of Messianic Judaism or a Messianic Jew. It seems to me that this questions is crucial in the current discussion. Both an analysis as well as a critical assessment would have been welcomed. While it is hard to criticize a book for not doing something one reviewer thinks they should have done, I think there is a lack of clarity on this point throughout which should have been identified and addressed. To put a fine point on it, What is a Messianic Jew? Is it someone, as David Rudolph asserts in IMJ, who is a Jew who claims to follow Messiah Jesus while continuing to live within the orbit of Judaism, however variously defined; or is it more broadly any Jew who believes in Jesus no matter what their social location maybe?

February 21, 2013
Early discussion on the Blogosphere about IMJ
Next Post