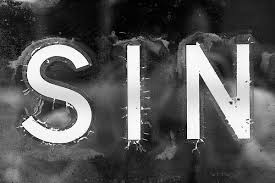 For Paul, “sin” is not just behavior, but more akin to force and dark power that holds sway over people.

While the doctrine of “original sin” gets a hard time (I prefer talking about original “guilt” and original “death”), G.K. Chesteron famously said, original sin is the only Christian doctrine that is empirically verifiable. All people sin. All people imitate sin. All people have a propensity to sin. All people are guilty of sin. That human beings sin, transgress, break laws, violate rights, and commit immoral deeds is self-evident to everyone. I have to confess that one of the things that amazed me as a parent was that I never had to teach my children how to lie. They picked it up quite naturally. The mess that one child makes he or she will instinctively blame on another child, preferably the younger one, who cannot yet speak for themselves. Greed, violence, and selfishness seem like the default setting that they are born with. I sincerely believe that crying babies would throw their own mothers under a truck if it would get them what they want. Experience has also taught me that raising toddlers is like working for Caligula and Charlie Sheen combined. A house run by teenage boys has about the same degree of law and order as lunatics running an asylum. A colony of minors stranded on an island would not resemble Peter Pan’s paradisiac Never Never Land, but would descend immediately into violence and terror more akin to William Golding’s novel Lord of the Flies where the strongest ruled the weakest with merciless spite. If you ever want to see what people are like, what they are truly like, see what they do when they think no one is watching them. Whether it is under a hoody, in a dark alley, or anonymously on the internet, that is when you see what evil desires and what dark proclivities lurk within the hearts of men and women. I’m sure psychologists, sociologists, and anthropologists have their own models and explanation for this sort of innately inhumane behavior, but just as equally important is the theological one: human beings are born into the world with an inherent propensity to sin because they are born into the world separated from God. The whole condition of guilt, sinful behavior, and death is all traceable to the one act of disobedience in our primeval parents, Adam and Eve.

The story narrated in Rom 5:12-21 is that God’s grace is greater than all our sin. Whatever Adam had done is matched by the how much more Christ has done for us. The death, condemnation, and corruption introduced with Adam is reversed and surpassed by the grace and gift available in the Lord Jesus. The German tennis player Boris Becker said that when playing his absolute best that he could theoretically beat American Pete Sampras. But he also said that if he played his best and if Sampras played his best, Sampras was always going to win, because his best was always better. If sin is Becker then grace is Sampras. Grace is always gonna win!

Coming to Rom 6:1-2 (“What shall we say, then? Shall we go on sinning so that grace may increase?  By no means! We are those who have died to sin; how can we live in it any longer?”) what Paul means by “sin” is a cross between a status, a state, and servitude. To put it another way, it is like he is asking whether believers think that, because they can drink from an overflowing fountain of divine grace, they can just hang up their hammocks and remain contented where they are despite the fact that they are in the middle of the Gobi desert where North African slave traders are likely to capture them and sell them into slavery. Grace is designed to get them out of that situation, not to make them feel more comfortable within it. Instead of living in Sin-land they can live in Graceland (complete with Elvis memorabilia).