Andrew Lincoln and the Virgin Conception 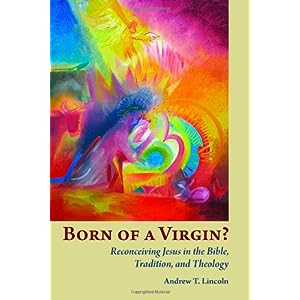 Andrew T. Lincoln
Born of a Virgin: Reconceiving Jesus in the Bible, Tradition, and Theology
London: SPCK, 2013.
Available at Amazon.com

This book is an attempt to show that one can still maintain a high christology of the incarnation without believing in a literal virgin conception of Jesus.

Lincoln argues that the oldest tradition in the NT about Jesus’ birth is that he was born from the “seed of David” with Joseph as his real father (Rom 1.3; Acts 2.30, 13.23). Even Luke and Matthew show signs of sources that reflect a minority view on Jesus’ birth as irregular but not necessarily miraculous. The Gospel nativity story is simply too close in character to Greco-Roman legends about the birth of certain heroes to be taken as history. In addition, modern views of the biology of procreation make a virgin conception either superfluous or problematic for a doctrine of the incarnation. In sum, Lincoln has written a neo-Schleiermacherian view of the virgin birth with a bit of anti-Barthian protest about it too.

Let me say that I could hypothetically imagine the birth narratives to be adaptations of Greco-Roman birth stories of ancient heroes combined with Jewish midrash on OT birth stories, then applied to Jesus, which function as transparently fictionalized accounts of Jesus’ birth in order to accentuate his identity as the Son of God. The net effect would be to show God’s role in preparing Jesus for a special work with a special birth and putting him on an equal path to greatness as enjoyed by other political and religious heroes of the ancient world who also had miraculous births. Such stories would heighten his messianic status, the divine preordination of his work, and to set him forth as a deliberate alternative to the propaganda of the Roman imperium about the divine sonship of the emperor. While I can “imagine” that, I just don’t think that is what the Evangelists were doing, nor is it what they were perceived to be doing in the early church.

The reasons for my apprehension is that I’m not convinced that Joseph’s acceptance of Jesus as his legal son would have prevented speculation from the irregularity of the circumstances surrounding his birth to the possibility of Jesus’ illegitimacy. The rumours of illegitimacy/irregularity are closest we can get historically to the story of Jesus’ conception (however we might interpret that fact). I’m also not convinced that because Jesus was known as coming from the “seed of David” that he must have been Joseph’s biological son. For a start, Jesus could have been from the “seed of David” by virtue of his maternal origins in Mary. Also sonship language can be metaphorical. Paul argues that Gentiles are from the “seed” of Abraham without having a biological connection to Abraham, nor was Augustus a biological son of Julius Caesar in order to be a “son of the divine Julius.” So Jesus’ Davidic status does not have to be biological (in fact, some think that Mark 12:35-37 is a debate over this very point!). In my mind, the NT has only two views on the virgin conception, its affirmation in Luke and Matthew and non-reference to it in the rest of the NT. While Mark, John, Paul, and Hebrews do not mention it, neither do it the say anything that I think rules it out either.

Those criticisms aside, I think this is one of the best non-conservative books on the virgin conception that I’ve read. It is not written with the condescending and dismissive treatment like Spong or Ludemann. There is a good effort to think through the doctrine in light of biblical criticism, incarnational christology, and even the biology of procreation. Even for those who disagree, it certainly raises the issues that need to be addressed. So I agree with what Howard Marshall wrote in his JSNT review, “What is certain is that this book is now essential reading on the topic.”