Jens Schröter’s From Jesus to the New Testament 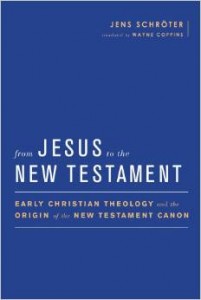 I have had finally gotten around to reading Jens Schröter’s book From Jesus to the New Testament: Early Christian Theology and the Origin of the New Testament Canon. It is a translation of his German, Mohr Siebeck volume Von Jesus zum Neuen Testament (2007).

The translation was done my one of my very good friends Wayne Coppins. Now you will often read in blog posts, folks referring to others as their “friend”, so I should underscore this point by admitting I’ve slept in Wayne’s bedroom! That’s the kind of friends we are. We were both supervised by Markus Bockmuehl (that is, when Markus wasn’t on sabbatical!) at Cambridge. Wayne is a professor at the University of Georgia where he had done is undergraduate; but we will forgive him for being a Bulldog!

Wayne and Simon Gathercole edit the new series of German translations for Baylor called Baylor-Mohr Siebeck: Studies in Early Christianity (BMSEC). They already have an impressive selection of recent and important German works translated and published. They have also recently published Schröter’s Jesus of Nazareth, in addition to this one.  One more thing about Wayne, last year he launch a useful blog for those interested in honing skills in translating German, “German for Neutestamentler“. While that is a niche audience, for those of us who struggle through German texts on a fairly regular basis, Wayne’s blog is so helpful.

I know this post is about Schröter’s book, but I need to tell a brief story about Wayne and Germany. Wayne studied for a year or more at Tübingen University before completing a Masters degree under Jimmy Dunn at Durham and starting his Ph.D. at Cambridge. When I planned to go to Germany for a couple of terms back in 2003, I followed Wayne’s guidance. Several years before that in preparation for Tübingen, he had taken a Goethe German language course in a little Bavarian town called Priene am Chiemsee, not far from Münich and Salsburg. He highly recommend the place and I followed his advice. I spent two months in the same Goethe course in Priene before also then going to Tübingen for the winter semester of 2003-04. That is a long time ago now! But those seven months – August to February – were amazing. I’ll be forever grateful for Wayne’s advice. And for those of you who are at the early stages of your Ph.D., you should consider taking the same advice too!

Now back to the book. This is not a detailed review of the book. And I am still reading it. Still, I’ve read enough of it to lend my own voice to the chorus of its praises. The buzz around it I think is warranted.

The book comprises a number of individual studies which cover a wide range of topics: historical theory, Paul, Luke-Acts, and canon – to name the primary ones. While it is not always clear what is the unifying principle of the book’s organization, the studies are interesting and in some cases groundbreaking.

For example, Schröter’s discussion of literary and historical presentations, drawing on the recent work of philosophy and historical and memory theory, is a step forward for New Testament historiography. He writes:

Historical (non-fiction) and literary (fiction) presentations do not simply stand in opposition to each other. While they do differ with respect to their referent, they nevertheless possess a common point of intersection. Unlike the literary narrative, the historical narrative understands itself to be obligated to the historical material and is verified or falsified by this. Nevertheless, it is also an explaining, meaning-creating instrument that cannot get by without constructivist elements . . . The commonality with the literary narrative consists, however, in the explanation through narration, which takes place in both cases: the model of the past happening that is set forth in historical narrative is also a structure of meaning that is based on the skeleton of the events and shaped and accounted for by the historian (26-27).

In relation to this is the important point he makes regarding theological exegesis. He clearly is on the side of the recent trend toward theological exegesis, but he insists, rightly, on the “necessity of exegesis for a Christian theology that is accountable to its origins” (32). In my experience with the field of theological exegesis, I think this point needs to be stressed more rigorously. Theological exegesis can’t simply tip its cap to the historical context, it must used that as one of the final criterion for the determination of valid interpretations. Barth’s insistence on the dissolution of the time gap between ourselves and Paul, for example, needs careful nuancing. “Accountability to its origins” is a very apt way of putting this criterion.

I’ve probed other parts of the book as well. Schröter’s two chapters on Galatians (chs. 7-8) are very interesting. His proposal for reading Galatians 1:6-7 has significant merit, the focus of chapter seven, “The Unity of the Gospel”. And although it is indeed an alternative to conventional wisdom, it has a strong pedigree. I happen to think that it offers the reader of Galatians an opportunity to start the interpretation of the letter on the right foot. There are significant aspects of his reading with which I strongly disagree (particularly the language of nullification of Jewish ethnic identity), but on the fundamental point at issue in the proposal, that Paul recognized two expressions of the one gospel (2:7), I am in full agreement. And am happy to find in Schröter an ally. One other thing, his proposal on the interpretation of 1:6-7 is supported by no less than William M. Ramsay in the English speaking world.

One other place I probed that was informative was Schröter’s discussion of the canonical gospels in a later chapter “The Church Has Four Gospels, the Hersey Many” (ch. 14). His discussion is apt as a dialogue partner for Francis Watson’s important work published at the same time Gospel Writing: A Canonical Perspective. Schröter writes,

The collection of the four gospels also developed rather early. This is supported by the fact that the collection of the Gospel codices is attested for the late second century and the witnesses of Clement of Alexandria, Origen, Irenaeus, and the Canon Muratori are in agreement in referring to an already existing tradition of four gospels accepted in the church. It speaks also for this view that gospels that emerged later, such as the Gospel of Peter or the Gospel of Thomas never stood on an equal basis alongside those of Matthew, Mark, Luke, and John. It is true that they can—as, for example, the Gospel of the Hebrews or the Gospel of the Egyptians in Clement—occasionally be cited, but they are distanced thereby from the fourfold gospel. The fact, which is by no means to be taken for granted, that the church possesses not one but four gospels is thereby grounded in such a way that the gospel understood as the one message in various forms: the Gospel according to Matthew or according to Mark, for instance. The superscriptions of the Gospels (which emerged afterwards) are therefore formulated in precisely this way (310-11).

This take on the place of the fourfold gospel’s early influence is briefly stated, but its essence is an indirect rebuttal of Watson’s thesis, which is much more elaborately argued. For my interests, however, Watson and Schröter coalesce in their shared focus on the one canonical gospel message, yet presented in four unique forms. One of my many current research questions is: how do we tell the one canonical Jesus story in view of the four unique canonical stories?

In sum, From Jesus to the New Testament, is a handsomely made volume by Baylor University Press consisting of a very good translation by Wayne Coppins of the important work of Jens Schröter, Von Jesus zum Neuen Testament (Mohr Siebeck 2007) . While I’ve not plumb all of its depths, I can assure the reader that they will not be disappointed with the level of exegetical and theoretical acumen.

January 27, 2015 Douglas Moo's ETS Lecture in Bible Translation
Recent Comments
0 | Leave a Comment
"Very interesting!"
Roger McKinney Christianity and Greco-Roman Moral Discourse
"I know she says it isn't technically a novel, but I do think Paula Gooder's ..."
Ros Exciting New Novels set in the ..."
"Robinson's writings (as shown here) do seem to be projecting modern Gender Studies narratives onto ..."
Harold Porter A New Look at Paul, Masculinity, ..."
"This should be interesting. I'm still trying to wrap my brain around Cynthia Westfall's book. ..."
NorrinRadd A New Look at Paul, Masculinity, ..."
Browse Our Archives
get the latest from
Euangelion
Sign up for our newsletter
POPULAR AT PATHEOS Evangelical
1

Can You Be a Baptist and...
Roger E. Olson
Books by This Author Books by Mike Bird

Evangelical
What is Biblicism?
Euangelion