Rom 1:3-4 as a Non-Adoptionist Text with Christology of Incarnation and Enthronement

Rom 1:3-4 as a Non-Adoptionist Text with Christology of Incarnation and Enthronement February 23, 2015 Michael F. Bird

I just read a most intriguing article by Matthew W. Bates on “A Christology of Incarnation and Enthronement: Romans 1:3-4 as unified, Nonadoptionist, and Nonconciliatory,” CBQ 77.1 (2015): 107-27 (FYI, follow the link and read it on Academia.edu).

1. The only Pauline glosses are 3a and 4e. The “in/with power” of 4b is not a gloss. According to Bates: “The whole protocreed can be more convincingly explained as one unified pre-Pauline source that supports rather than undermines the preexistence of the Son of God and the virgin birth.”

2.  Bates treats τοῦ γενομένου as “who came into existence” rather than as a synonym for gennao for “I beget”.  While he admits that ginomai can designate an ordinary birth, he points out the parallel language in  Gal 4:4 and Phil 2:6-7 which imply a change of status from a heavenly mode of existence to an earthly one. He also treats the preposition ek in ek spermatos Dauid as indicating Mary’s instrumental role in Jesus’ birth. He’s got some interesting reception history here from Ignatius and Irenaeus, but I find this to be the weakest plank of his argument.

3. The phrase kata sarka is not derogatory as it implies the Son’s pre-existence and speaks to his transition to the weak and frail human state.

4. The en dunamei modifies Huiou Theou rather than oristhentos and is best translated as “Son of God in power”. Therefore there is no adopionistic christology here since “the resurrection event was the occasion at which the Son of God, who was in fact already deemed the preexistent Son of God before the resurrection event, was appointed to a new office that was able to be described by the phrase Son-of-God-in-Power.”

He would paraphrase Rom 1:3-4 as follows:

The gospel concerning the Son of God, who was brought from preexistence into human existence by means of the Virgin Mary, the seed of David, as it pertains to the flesh, that is, to the fleshly realm characterized by human physicality with  all its limitations. This Son of God was installed into a new office – Son-of-God-in-Power – as it pertains to the realm dominated by life in the Holy Spirit – by means of his resurrection from among the dead ones. This Son-of-God-in-Power is Jesus Christ our Lord.

There is some good stuff here, I’m interested but not convinced by Bates’  reading of Mary as the instrument for incarnation, but it is certainly a good critique of many of the older theories about Rom 1:3-4 as adoptionistic.

It all reminds me of something Peter Stuhlmacher said: “The supposed two-stage adoptionistic Christology presumbed to lie behind Rom 1:3-4 has no more life setting in early Christianity that the adoptionism suspected behind Mark 1:9-11.”
Peter Stuhlmacher, Biblische Theologie, 1.188.

February 24, 2015 Steve Walton Reviews Jesus is Lord, Caesar is Not
Recent Comments
0 | Leave a Comment
Browse Our Archives
get the latest from
Euangelion
Sign up for our newsletter
POPULAR AT PATHEOS Evangelical
1

Are COVID-19 vaccines made from aborted...
Adrian Warnock
Books by This Author Books by Mike Bird 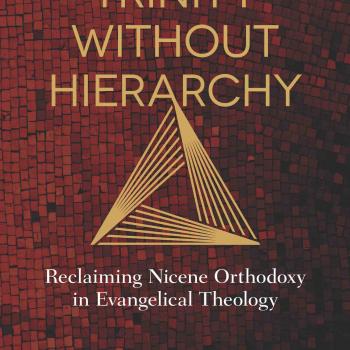 Update on the Urbana Conference
I just returned from Urbana, IL. Honored to be the keynote speaker...
view all Evangelical blogs
What Are Your Thoughts?leave a comment
Copyright 2008-2020, Patheos. All rights reserved.