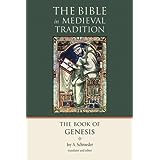 Joy A. Shroeder (trans, ed)
The Book of Genesis
The Bible in Medieval Tradition
Grand Rapids: Eerdmans, 2015.
Available at Amazon.com

Joy Shroeder (PhD Notre Dame) is holder of the Bergener Chair in Theology and Religion at Trinity Lutheran Seminary and Capital Seminary in Ohio. Schroeder works in feminism in medieval thought and Old Testament studies. She is the author of Deborah’s Daughters: Gender Politics and Biblical Interpretation (2014) and Dinah’s Lament: The Biblical Legacy of Sexual Violence in Christian Interpretation (2007). Shroeder is a Lutheran (ELCA) pastor who regularly speaks in congregations and clergy continuing education events.

‘Critical engagement with medieval exegesis counteracts the twin dangers of amnesia and nostalgia. One temptation is to study the Bible as if its interpretation had no past… Medieval exegesis also bears studying because it can exemplify how not to interpret the Bible… Yet with its playful attention to words and acceptance of a multiplicity of meanings and methods, it anticipated critical theory’s turning to language today and the indeterminancy characteristic of its literary theory.’ (from the Editors’ Preface to the series)

The Book of Genesis is the latest offering in the Bible in Medieval Tradition series which fills the gap between patristic and Reformation exegesis. Volumes on Galatians and Romans have already been published. Compared with patristic material, relatively little medieval exegesis has been translated. In this series, significant sections of previously untranslated texts are made available in English, enabling a more informed grasp of the church’s interpretive tradition. The excerpts are continuous portions of 20-30 pages by each author, unlike the approach of the Ancient Christian Commentary or Reformation Commentary on Scripture which are digests of short word bytes by various authors.

Schroeder selects portions from commentators which cover every chapter of Genesis, and also illustrate a range of medieval approaches to Scripture. Genesis 1-3 is discussed by Remigius of Auxerre (c. 841-c. 908), Genesis 4-8 by Rupert of Deutz (c.1075-1129/30), and the later chapters of Genesis are treated by Andrew of Saint Victor (c. 1110-c.1175), Peter Comestor (d.1178/9), Nicholas of Lyra (c.1270-1349) and Denis the Carthusian (c.1402-1471). A segment of the Solutions of Hildegard of Bingen (1098-1179) is also included in the volume. Though Hildegard did not write a formal commentary, she was a learned nun who discussed questions relating to the exegesis of Genesis.

The introduction provides a helpful orientation to the writers and their writings. Medieval commentators, like patristic authors, sought the ‘fourfold sense’ of Scripture: literal (relating to the text within its genre), allegorical (relating to Christ and the church), moral (what we should do) and anagogical (referring to the soul and the hope of heaven). Remigius focuses on a theological and pastoral reading, while Rupert’s exegesis is allegorical, referring to Christ and the church. The literal-historical sense is discussed by Andrew of St Victor and Peter Comestor. Nicholas of Lyra was a Hebrew scholar who also engaged Jewish exegesis. Nicholas became a standard reference for later scholars, including Luther. Denis sought to hold learning and piety together, and complemented his exegesis with moral and mystical applications.

The editors’ invitation to avoid both amnesia and nostalgia is potent. Bible students have been warned of the dangers of allegorical interpretation, yet these medieval commentators offer valuable spiritual insights. We may be tempted to elevate these writers for their piety and devotion, yet some works are marred by virulent anti-Semitism. Schroeder has decided to present the writers ‘warts and all.’ We may respond by reflecting on the blind spots of our own times, and perhaps learn some forgotten virtues from these forerunners of our faith.

The introduction is written in a scholarly but accessible style. The excerpts are often of commentaries based on sermons or lecture notes, so they are very readable. I enjoyed this introduction to medieval exegesis very much and recommend it to any who enjoy meeting the saints of old or deepening their grasp of Scripture and the interpretive tradition. Students cannot afford to have a lacuna of a thousand years between the Fathers and the Reformers. Reading the Biblical commentary of the medievals is a helpful way to bridge this gap

August 15, 2016
Some Notable New Studies about the Septuagint
Next Post

August 18, 2016 Book Notice: Stephen Chapman on 1 Samuel
Recent Comments
0 | Leave a Comment
"Let us face facts: Communion, whether the spirit of Jesus is there or not, is ..."
Kyllein MacKellerann What Happens in the Lord’s Supper ..."
"Off topic question: In what type of body did Moses and Elijah appear to the ..."
Gary M Rom 3:21-26 – Translates, Paraphrase, Notes
"Very good and helpful article, succinctly sums up the core ideas of biblicism. Contrary to ..."
Alin Christoph Cucu What is Biblicism?
"I am sorry, but a theologian with Dr. Richter's reputation, training, and influence should not ..."
Chris Arch Sandra Richter Responds to John Piper
Browse Our Archives
get the latest updates from
Euangelion
and the Patheos
Evangelical
Channel
POPULAR AT PATHEOS Evangelical
1