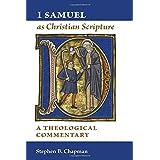 Stephen B. Chapman (PhD Yale) is associate professor of Old Testament at Duke Divinity School, director of graduate studies in religion at Duke University, and an ordained American Baptist minister. He is author of The Law and the Prophets: A Study in Old Testament Canon Formation (2009).

An outstanding feature of 1 Samuel as Christian Scripture is its bibliography, which runs to 60 pages of small print. As Brent Strawn comments on the book jacket, ‘is there anything he hasn’t read?’ The bibliography begins with a book on Elie Wiesel, the Nobel prizewinning author of the holocaust book Night, and moves through Aelred of Rievaulx, Robert Alter, Thomas Aquinas, and Eric Auerbach to a satisfying conclusion in the Z’s including Jewish (Yair Zakovich), female (Susan Zeelander) and German (Wolfgang Zwickel) scholars. Chapman’s research focuses on issues of canon, hermeneutics and theological approaches to scriptural interpretation so these issues are well represented in the bibliography, alongside the technical and exegetical aspects of 1 Samuel.

Chapman seeks to answer the question, what is 1 Samuel about? This question can be approached by seeking to read the text as the writer seems to have intended, and allowing the application to arise from the whole trajectory of the book. While significant details are discussed, Chapman focuses on the ‘center of gravity’ of 1 Samuel, and describes its narrative logic. He has sought to write 1 Samuel as Christian Scripture as a ‘modest illustration’ of how to linger in the narrative world of the text while also looking towards Christian theological interpretation.

The text is broken into three sections, reading 1 Samuel as a book, a close reading of 1 Samuel, and theological and historical reflections. As 1 Samuel and 2 Samuel were originally a single work, 2 Samuel and especially 2 Samuel 21-24 are ‘applied “backwards”’ to give insight to 1 Samuel. The MT is the base text. Though other texts such as LXX are consulted, the focus is on a literary reading which follows a single textual tradition rather than developing an eclectic text. Chapman locates the text within deuteronomistic theology associated with the reign of Josiah (640-609 BC).

Personal piety, true religion and the threat of civil religion are addressed in 1 Samuel, as well as the rise of the monarchy. Saul’s attempt to use religion apart from personal piety is powerfully portrayed in 1 Samuel, and is a warning to us today. David, despite his failures, operates from a deep personal piety in seeking to establish the worship of God and the institutions of public worship in Israel. However, Saul is not to be demonised and David canonised, as both had both flaws and struggles. Chapman engages with the issues of civil religion and the modern separation of church and state in America, though these are alien categories to the world view of 1 Samuel. The book closes with a reminder that God cannot be domesticated. Despite our fear of powerlessness and our desire for control, ‘there is something above our will, moving us and using us for purposes that are wider than our own immediate failure or success’ (quoted from A. B. Davidson).

This most engaging book will be valuable for understanding 1 Samuel and also for a deepened understanding of how to read the OT as Christian Scripture. In the run up to a Presidential election, it is also an invitation to us all to consider the role of piety and religion in the public square and in the seat of power.