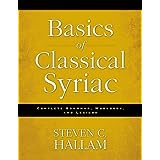 Steven C. Hallam has taught Hebrew, Greek, Aramaic and Syriac at a graduate level. He has written a clear and practical text welcoming new students into the Syriac language. Syriac is a dialect of ancient Aramaic, and is similar in basic structure to Aramaic as well as having many similarities to Hebrew. The book is written for those who have not studied Hebrew or Aramaic. Hallam encourages the reader to take Syriac on its own terms. However, students who are familiar with Hebrew or Aramaic will find the grammar easy to access.

Basics of Classical Syriac is user-friendly like Basics of Biblical Aramaic and Basics of Ugaritic in this Zondervan series. After presenting the alphabet, Basics of Classical Syriac introduces the nominal system, then the peal verbal system (similar to Hebrew qal) then Derived Stems and Weak Verbs, also fairly analogous to Hebrew. The verbs have triconsonantal roots and three categories of stems (simple, intensive, causative) as well as the same conjugations as in Hebrew.

However, compared with learning Biblical Aramaic which uses the same script as Hebrew, or Ugaritic where the Zondervan volume uses only transliteration, learning a new script for Syriac is a more daunting task. In addition, there are three choices of Syriac script. Estrangela is the oldest, then after a split due to Christological controversies in the fifth century AD, a Western Script and an Eastern script developed. Estrangela, the script used in Hallam’s book, is typically unpointed (i.e. does not have vowels written on it). However, in this textbook, Hallam adds the vowels from the Western script to the Estrangela consonants (he says they are easier to learn than the Eastern vowels).

Syriac uses a system of alphabetical consonants and vowel markings, like Hebrew. The letters sound similar to Hebrew (alap, beth, gamal, dalat) and have the same transliterations and similar pronunciations. There are final forms for k, m, n, as in Hebrew, but also medial forms when the letter occurs in the middle of a word. The words are read right to left, as in Hebrew. The Western vowels developed alongside Greek, and so Greek letters are used diacritical marks for the vowels (a, e, i, ā, u). The Eastern system uses dots as diacritical marks. The vowel ā is pronounced differently in Eastern (Peshitta) and Western (Peshitto).

Hallam suggests that beginners copy texts word for word on paper to gain familiarity with letter shapes and vowels. The first chapter offers a list of proper names including Abraham, David, Jesus and Paul, which could be a good place to start (page 19). Hallam provides the Lord’s Prayer, Abun D’Bashmaya (page 25) which would also be excellent as Youtube contains plenty of sung versions which could be enjoyed while performing this scribal labour. Biblical texts in the textbook are from The Leiden Peshitta at http://call.cn.huc.edu/.

Syriac is useful particularly useful for New Testament study but also useful for textual criticism of Old Testament and reading the church fathers. An on-line course will be available separately from Zondervan. I am looking forward to making a start on this book.

Jill Firth lectures in Hebrew and Old Testament at Ridley College Melbourne. She holds a PhD in Psalms.

January 12, 2017
Book Notice: Preaching Christ from the Psalms
Next Post

Progressive Christians are More Political than...
Cranach
Books by This Author Books by Mike Bird