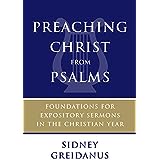 Greidanus settled on a lectionary approach, after deciding not to develop a book on imprecatory psalms (‘what pastor would want to preach a series of sermons on the imprecatory psalms?’), the Songs of Ascents (too similar to each other), or a biblical-theological series on Creation-Fall-Redemption-New Creation. Thus there are psalms for Advent (122, 72, 146, 79); Christmas (95), Epiphany (72), Lent (32, 121, 95, 23, 130) and Palm Sunday, Good Friday, Easter, Pentecost, Trinity Sunday and Christ the King.

He offers a helpful introduction to the Psalter before moving into ten steps of hermeneutical-homiletical exploration of the twenty two chosen psalms. Greidanus’ book is especially aimed at newer preachers, seeking to help them write sermons that are ‘biblical, relevant and well organized.’

The first chapter considers possible objections to preaching Christ from Psalms, and literary and historical interpretation, before describing his own approach of ‘theocentric’ and ‘Christocentric’ interpretation. Greidanus argues that an anthropocentric approach to Psalms, focusing on human emotions or culture is to ‘miss the point’ of the Psalter. ‘The key player is God’ and our relationship with him, according to Greidanus (quoting Paul Wilson). Greidanus asks, ‘What does this psalm say about God and God’s relationship with creation and his people?’ (page 32).

Christocentric interpretation involves moving from the Old Testament text to its context in the whole Bible, which includes the New Testament. Greidanus suggests seven approaches, including redemptive-historical progression, promise-fulfilment, typology, analogies between Israel and the church, longitudinal themes such as the poor, Old Testament citations in the New Testament, and contrasting the Old and the New Testament.

The introductory comments are necessarily general and some aspects lack nuance. In an otherwise helpful analysis of lament, Greidanus comments (page 11) ‘all laments, except Psalm 88, move from lament to praise.’ While it is true that Psalm 88 is the only psalm to lack any praise component, it is not correct that all laments move from lament to praise, as demonstrated by Villanueva, The Uncertainty of a Hearing (2008) who shows that some psalms move from praise to lament.

In Greidanus’ example of contrast (pages 36-37), he compares Psalm 137.8-9 (‘happy shall they be who take your little ones and dash them against the rocks!’) with Jesus’ command to forgive enemies (Matthew 5.44) and with Jesus’ dying prayer for forgiveness (Like 23.34). However, the comparison is overdrawn, as the New Testament is more complex. We can consider Jesus’ woes to the Pharisees (Matthew 23.35-36) and to those who harm the faith of children (Matthew 18.6-7) and his warning of gnashing of teeth (Matthew 8.12) and misery to those who reject his message (Matthew 10.15) and unforgiveness for those who blaspheme against the Spirit (Matthew 12.31). See also St Paul’s anathema of the circumcision party (Galatians 5.12) and those who destroy the faith of others (2 Timothy 4.14), and St John’s destiny of the lake of fire (Revelation 20.15) for the unrepentant.

A chapter is devoted to each psalm, and the book ends with sample sermons and suggested preaching plans, including the Creation-Fall-Redemption-New Creation schema and form-critical series on hymns, thanksgivings, laments and even imprecatory psalms. This is a helpful book from a seasoned scholar and preacher, with many aids for those who are new to preaching the Psalms. Most of the selections fall in the first half of the Christian year (December to June) and as the book is focussed on psalms which appear in Year A of the Revised Common Lectionary (the current cycle in 2017 is Year A), a series on Psalms in Lent or Holy Week may be a very good way to use this book.

Jill Firth lectures in Hebrew and Old Testament at Ridley College in Melbourne and holds a PhD in Psalms studies.

Happy Birthing Person Day
I'm over at Stand Firm this morning. Today, apparently, is “Birthing Person”...
view all Evangelical blogs
What Are Your Thoughts?leave a comment
Copyright 2008-2021, Patheos. All rights reserved.
error: Content is protected !!