Who Are the Opponents in the Epistle of Jude?

In the Letter of Jude, there are some harsh words used to describe certain false teachers – usually called libertines or errorists – who have entered the Christian assemblies. These intruders who Jude vilifies in the harshest rhetoric he can muster have been identified varying as people from Pauline circle to early Gnostic Christians.

Jude labels them as ‘ungodly men’ who have ‘perverted’ divine grace into a license for debauchery and ‘deny Jesus Christ.’[1] They are denounced for sexual immorality in the order of Sodom and Gomorrah. It is likely that these intruders lay claim to pneumatic inspiration for various visions and ecstatic utterances since they are dismissed as ‘dreamers.’[2] A characteristic feature is their denial and/or slander of angelic and celestial powers.[3] Jude describes their teaching with metaphors that equate it as fruitless and futile.[4] The effect of their ministry is contamination and defilement, both of themselves and others around them, especially in community ‘love feasts’[5] which were perhaps being turned into a Greek symposia or drinking party.[6] They are described as rapacious and greedy, self-absorbed and self-serving, taking advantage of people.[7] Such persons are driven by evil and godless ‘desire.’[8] They are quick to complain and criticize.[9] It is no wonder that their presence is divisive. Jude’s assessment of them is that they are ‘worldly’ and ‘do not have the Spirit.’[10] No surprises that Jude identifies them against several scriptural types of rebellion, immorality, and wickedness including Cain, the angels who rebelled against God and departed from heaven, the Israelites who grumbled in the wilderness, Sodom and Gomorrah, Balam, and Korah’s rebellion.[11] Jude does not mince his words about what awaits such people, he says that they are destined for ‘destruction,’ ‘condemnation,’ ‘eternal fire,’ ‘the blackest darkness,’ and ‘judgment.’[12]

Scholars debate as to whether such remarks are merely rhetorical tropes about impious wickedness in general, or if Jude is writing about specific persons, and if so, then who. If these intruders are real, we are probably to imagine something like a cross between the pseudo-apostles and false-prophets mentioned in the Didache and the lurid description of the love-feasts held by the Carprocratians described by Clement of Alexandria.

Now concerning the apostles and prophets, deal with them as follows in accordance with the rule of the gospel. Let every apostle who comes to you be welcomed as if he were the Lord. But he is not to stay for more than one day, unless there is need, in which case, he may stay another. But if he stays three days, he is a false prophet. And when the apostle leaves, he is to take nothing except bread until he finds his next night’s lodging. But if he asks for money, he is a false prophet.[13]

These are the doctrines of our noble Carpocratians. They say that these people and some other zealots for the same vicious practices gather for dinner (I could never call their congregation a Christian love-feast), men and women together, and after they have stuffed themselves (‘The Cyprian goddess is there when you are full,’ they say), they knock over the lamps, put out the light that would expose their fornicating ‘righteousness,’ and couple as they will with any woman they fancy. So in this love-feast they practice commonality. Then by daylight they demand any woman they want in obedience – it would be wrong to say the Law of God – to the law of Carpocrates. I guess this sort of legislation Carpocrates must have established for the copulation of dogs, pigs, and goats. [14]

The short of it is that we do not know for sure who these wicked persons are, but we can gather that Jude is thoroughly disgusted by them. 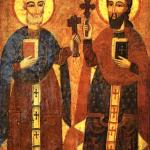 August 28, 2017
Revisiting James and Paul on Justification
Next Post