Reflections on the Nashville Statement

I have finally had a chance to read and reflect on the Nashville Statement and can now offer some thoughts on it.

First,  I know and genuinely respect some of the people who signed it, and I can understand why they did. We are living in a pansexual age where there is a serious cultural contest over what it means to be a gendered human being and the very meaning of human sexuality itself. What is more, we can see peculiar emphases on things like gender fluidity, a gnostic dislocation between one’s “identity” and one’s “body,”  efforts to deconstruct the whole idea of the nuclear family, and treating sex like an idol. I believe that the sexual revolution has become the de facto imperial cult of the political left. It is a cult with one confession: there is no god but sex and orgasm is his prophet. What is more, many progressive Christians have made themselves chaplains to this sex-cult and are willing to baptize and bless whatever idols that progressive activists lay at their feet. So I am naturally sympathetic.

Second, I detect a genuine attempt to be pastoral towards LGBTI people, though whether it is perceived as pastoral and loving will be another matter. I think it unfair to label this – as some have – as a hate statement.

Third, I can agree with many of the affirmations and denials. All human beings are in the image of God, Christian marriage is between a man and a woman, celibacy in singleness and fidelity in marriage, differences between the sexes are for human flourishing, one can be same-sex attracted and be a faithful Christian, the necessity of speaking the truth in love, and an affirmation that God’s grace embraces sinners of any and every kind.

Nonetheless, I regard the statement as deeply inadequate on several fronts.

First, article one, this only permits the existence of Christian marriage, not civil partnerships or even common law marriages. Even Christendom did not restrict male-female union to sacramentally blessed marriages. This denies the existence of secular or other-faith marriages, which is problematic in a multi-cultural context.

Second, articles five to seven and thirteen are grossly inadequate as either a theological statement or a pastoral response to people who are intersex or experience gender dysphoria. For a start, the operating assumption here is that biological sex and gender are the same thing.  They are not. While sex informs gender, gender also encompasses the synthetic construction of cultural values and roles around biological sex. The statement also implies that one cannot identify as both “Gay” and “Christian,” which ostracizes so many good Christian people who are orthodox and even celibate in singleness. Plus, we have to remember that words like “transgender” are not self-evident, they are disputed in medical and queer discourse, so this statement requires a glossary. When it comes to things like transgender and intersex, the fact is that we do not fully understand the link between biology and psychology, so many things can adversely affect a person’s sexuality and identity. For instance, a male baby over exposed to estrogen while in-utero, or a woman who has male chromosomes. It is inaccurate to label people who are intersex as “eunuchs,” because they are not castrated males, rather, they have features of both male and female sex organs to some degree. To deal with intersex people and those who experience gender dyphoria – medically, psychologically, and pastorally – you need more than some church leaders making tweet length pronouncements. On this point, read Mark Yarhouse’s response to the Nashville Statement. Oh, and please, please, for the love of all that is good and holy, please watch The Gender Conversation lectures on 8. Gender, Biology, and Identity by Justine Toh, Andrew Sloanne, and Patricia Weerakoon. You will get a foretaste of the complexity that this topic is connected to.

Third, there was no affirmation of the pain experienced by LGBTI people, no recognition of the sins committed against them by the church, no concession about the inadequacy of many pastoral responses to LGBTI people, and no denunciation of homophobia.

Let me add that I understand what is at stake in our culture. In Australia we are in the throes of an acrimonious debate about same-sex marriage – and I mean nasty! Facebook now lists 70+ different gender identifications. The words “I identify as …” are treated like a magic formula that can turn you into anything you like. Some activists are trying to teach gender fluidity to children and even encourage confused pre-pubescent kids to transition to another gender. Anyone with a traditional view of marriage as between a man and a woman can be demonized. I read CNN and the NYT, I know what is going on.

However, some topics are so theologically complicated and so anthropologically messy that you cannot just offer tweet length responses to them. Rather than a tweet, you need an essay, one that is resourced in natural and special revelation and one that offers pastoral reflections based on conversations with the people you are talking about. As Matthew Lee Anderson says in his response, “issues of maximal importance deserve maximal responses.”

More than ever, we need to develop an orthodox anthropology that is capable of engaging the issues of the twenty-first century. Sadly, I do not think the Nashville Statement does this.

So, my verdict: the Nashville Statment is well-intention, some genuinely sound stuff is contained there, but the substance in places is superficial, and some parts are not beneficial to an evangelical witness to LGBTI people. 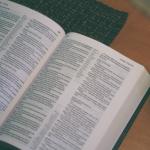 September 1, 2017
Who Are the Opponents in the Epistle of Jude?
Next Post