Author and blogger Rachel Held Evans recently posted this on twitter about Jesus and the Syro-Phoenician/Canaanite woman: 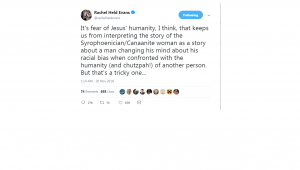 This line that Jesus changed his ethnic prejudice about Syro-Phoenicians based on this woman’s faith is a standard line in some quarters of scholarship, and one that has even filtered into some Jesus films.

It just so happens that I wrote my PhD thesis about Jesus and Gentiles, so I’ve studied a thing or two about this, and developed my own opinion. Here is what I wrote in my thesis.

The pejorative insult ‘dog’ is frequent in Israel’s sacred traditions and second-temple Jewish literature.[1] Such dogs in the Jewish view were not domesticated pets but wild, unclean scavengers.[2]  In a midrash on Psalm 4, Gentiles are compared to dogs at the eschatological banquet, where the dogs get to eat, but do not dine as sumptuously as the invited guests.[3] The Babylonian Talmud reports that ‘as the sacred food was intended for men, but not for the dogs, the Torah was intended to be given to the chosen people, but not to the Gentiles.’[4]  Some scholars attempt to lessen the force of Jesus’ insult by appealing to the diminutive use of kunara (‘little dogs’ or ‘household dog’, instead of kuōn ‘street dog’)[5] and so imply that the dogs belong to the household and should be fed with the children.[6] But the woman is acting like a scavenger dog because she asks for what is not rightly hers.[7] Furthermore, Mark uses diminutives too often to be able to make such an exegetical point out of them (e.g. in this passage alone thugatrion [daughter], psichion [crumb], paidion [child]).  To call the woman a ‘little bitch’ is no less abusive than calling her a ‘bitch’.[8]  Guelich also notes that the contrast between ‘children’ and ‘dogs’ means the difference lies in kind, not simply in degree.  ‘In short, Jesus rejected her request because of who she was, a Gentile.’[9]  Yet if one examines the saying in its narrative context (assuming the saying and narrative historically go together), it reflects more of an ironic quip, in which Jesus’ harsh words may have been designed to invite the woman’s witty reply (e.g. Mk. 7.29: ‘because you have said this’).[10]

Several scholars suppose that the conversation that Jesus had with the woman changed his mind on the issue of the Gentiles.[11]  Feldmeier comments:

The episode is in any case authentic for the reason that it does not reflect the pristine image of the infallible religious hero. The same evangelists who proclaim Jesus as the Son of God and Messiah of Israel, showing how his divine authority is reflected in all his works and deeds, also provide the portrait of a Jesus who is ready to have the presuppositions of his self-understanding challenged, indeed, corrrected, by the arguments of a pagan woman. [My very rushed English translation].

The problem is that such a view includes some kind of psychologizing of Jesus, and Hooker correctly advises that we lack the kind of evidence to trace such a development in Jesus’ thought as to how he might have shifted his attention from the Jews to the Gentiles, as Paul is reported to have done in Acts 18.6.[13]

Jesus’ ironic remark towards the woman concerns the focus of Israel in his mission and deliberately attempts to elicit a shrewd comeback.[14] He acknowledges the validity of the woman’s reply that Israel’s blessings can, even in limited ways, extend to Gentiles, a theme found elsewhere in the Jesus tradition (e.g. Lk. 4.25-27).  But the key issue is that such a blessing is available for Gentiles in the present.  Rhoads paraphrases the woman’s response: ‘Even now I and my daughter at the margins (should) benefit from just one exorcism from among the many benefits for the Jews.’[15] This aspect has a direct bearing upon the argument that I am constructing.  Whereas the salvation of the Gentiles was ordinarily programmed to occur at the eschaton, here the in-breaking of the kingdom and the gradual restoring of Israel was already bringing immediate results for Gentiles. Jesus’ ironic aside is met with recognition from the woman not merely of the priority of Israel, but the significance that Israel’s salvation holds for Gentiles in the present. As the children of Israel are being fed, crumbs are now falling for the dogs. As Israel’s restoration becomes more and more of a reality, it becomes more and more possible for Gentiles to experience the blessing of its fulfillment. In this sense, interpreting the pericope in terms of ‘Jew first and then Gentile’ fails to grapple with the significance that a partially realized restoration has for Gentiles.  That is not to collapse the entire eschatological hope for the Gentiles into Jesus’ ministry since the full inclusion of Gentiles can only begin when Israel’s restoration is complete.  What is important is that the restoration of Israel, in nascent form, carries with it incipient eschatological benefits for the Gentiles who find themselves confronted with God’s anointed prophet. As the children of Israel are fed, it is possible for the dogs (i.e. Gentiles) to be fed as a consequence of Israel’s dawning restoration.

So while I appreciate the angle that Rachel Held Evans is trying to advocate, get Trump and Trump supporters to change their mind on race/ethnicity like Jesus did, I’m not so sure that this passage is the way to do it. I’d suggest she try Acts 15 or Galatians 2.

November 23, 2018
50 Maxims for Men in an Age of Toxic Masculinity and Identitarian Craziness
Next Post