“For 1500 years there was never one guy and his pulpit being the center of the church. It was the body and blood of Christ, and even the leaders just saw themselves as partakers.”

As you can imagine, this led to an avalanche of criticism against Chan on social media; mainly concern that he was turning Catholic or else diminishing the importance of preaching.

Well my sympathies are with Chan and I’ve been tweeting about it. But let me explain why I believe in Jesus’s presence at the Supper and why we should have a high view of the Supper.

A colleague once related to me that a particular chapel he frequented had a communion table with a stained-glass window above it depicting the scene from the Gospels where the women visited the empty tomb. The words of the angel to the women, “He is not here!” were inscribed underneath the window. So, ironically, whenever you looked at the communion table, you could see the words “He is not here!” That sums up how many people feel about the Lord’s Supper (or Communion or Eucharist). Jesus is remembered, but he is not present! But that is a deficient view of the Supper; Jesus’s presence is the whole point!

Yes, when Paul says, “For whenever you eat this bread and drink this cup, you proclaim the Lord’s death until he comes” (1 Cor 11:26), the meal looks forward to the Lord’s bodily return and thus presupposes his bodily absence in the interim. So whatever presence we have in the Eucharist, it is not Jesus’s physical body that is present since his glorified body is exclusively located in heaven. According to Richard Hays, “Thus, the meal acknowledges the absence of the Lord and mingles memory and hope, recalling his death and awaiting his coming again.”[1]

True too that John’s Gospel is decidedly asacramental since Jesus is never baptized and never institutes the Eucharist. Instead, the Fourth Gospel emphasizes faith, believing, and trusting in the Father and the Son (e.g., John 5:24; 20:31). However, one can hardly miss the eucharistic subtext in John 6, with its references to eating Jesus’s flesh and drinking his blood (John 6:51–58). The discourse in John 6 is largely metaphorical for believing in Jesus Christ as the one who takes away the sins of the world. Still, it is hard not to think about the Eucharist when one reads John 6. Calvin saw an “intimation” of the Eucharist in the passage because it teaches that Christ is the bread of life, that we believe in him for that, and that we express our faith in him by feeding on him at the Eucharist. For Calvin, Jesus is teaching that our salvation is treasured up in our faith, but there is also a real communication of him that takes place in his body and blood.[2] So I would say that John 6 is not about the Eucharist but nonetheless foreshadows it. Consequently, “This means that if John 6 is not about the eucharist, the eucharist is undoubtedly about John 6.”[3]

There is no denial by anyone, including Catholic and Orthodox, that the Eucharist is a memorial meal of sorts since the Eucharist commemorates and celebrates the sacrificial death of Jesus Christ. However, I think there is clearly more to the Eucharist than the memory of Jesus’s death and reminding us that Christ is with us.

The two travelers to Emmaus told the disciples how they met Jesus on their journey and how he was made known “to them in the breaking of the bread [Gk. en tē klasei tou artou]” (Luke 24:35). The eucharistic echoes are transparent here. Luke is evidently pointing ahead to Acts 2, where the disciples were dedicated to “breaking bread” together in their fellowship (Acts 2:42, 46). When the disciples met together to break bread, they also met with Jesus in the bread.

In addition, Paul teaches about a real encounter with Christ through the elements. Through the wine, there is a real “participation” in the blood of Christ, and through the bread, there is a real “participation” in the body of Christ (1 Cor 10:16). The Greek word for “participation” is koinōnia, meaning “fellowship” or “sharing.” Plain as day, through bread and wine, we actually commune with Christ, and this communion requires an exclusive allegiance that forbids us from partaking of pagan sacrifices. The bread and wine of the Eucharist actually fosters a vertical communion with the exalted Christ and facilitates a closer horizontal relationship with fellow believers.

The other thing we have to say is that the early church quickly developed a notion of a real presence of Jesus at the Eucharist. Justin Martyr said, “For we do not receive these things as common bread or as common drink; but as Jesus Christ our Savior being incarnate by God’s word who took on flesh and blood for our salvation, so also we have been taught that the food consecrated by the word of prayer which comes from him, from which our flesh and blood are nourished by transformation, is the flesh and blood of that incarnate Jesus.”[4] And Irenaeus declared, “For as the bread, which is produced from the earth, when it receives the invocation of God, is no longer common bread, but the Eucharist, consisting of two realities, earthly and heavenly; so also our bodies, when they receive the Eucharist, are no longer corruptible, having the hope of the resurrection to eternity.”[5] Ambrose of Milan argued for divine power to change the elements: “But if the word of Elijah had such power as to bring down fire from heaven, shall not the word of Christ have power to change the nature of the elements?”[6] The early church probably arrived at this conclusion of a real presence by reading Jesus’s words of institution (Matt 26:26–29) in light of the Johannine eucharistic discourse (John 6:26–65). The question is: What kind of presence is found in the Eucharist, and by what instrument is that presence communicated to us?

In the end, I think the Reformed position is the one that has the most explanatory power for understanding Jesus’s presence in the Eucharist. The Reformed view is that the Holy Spirit makes Christ present in the Eucharist, and the same Spirit communicates benefits to partakers of the Eucharist. The presence of Christ is not mediated through the church’s mutation of the elements into Christ’s body and blood (i.e., transubstantiation or consubstantiation). The presence of Christ is not restricted to the believer’s faith, reducing the bread and wine to a memorial. It is the Holy Spirit who draws Christ downward and the believer upward to meet Christ in the gospel meal.[7] The Holy Spirit is the instrument of our union with Christ and perichoretically energizes the elements to convey the presence of Christ and the grace that accompanies his work.[8]

Moreover, I would maintain that the presence of Christ in the meal, a real “participation” in Christ, is essential for the meal to have any efficacy or value. Calvin’s words from his Shorter Treatise on the Lord’s Supper are robust on this matter:

We begin now to enter on the question so much debated, both anciently and at the present time—how we are to understand the words in which the bread is called the body of Christ, and the wine his blood. This may be disposed of without much difficulty, if we carefully observe the principle which I lately laid down, viz., that all the benefit which we should seek in the Supper is annihilated if Jesus Christ be not there given to us as the substance and foundation of all. That being fixed, we will confess, without doubt, that to deny that a true communication of Jesus Christ is presented to us in the Supper, is to render this holy sacrament frivolous and useless—an execrable blasphemy unfit to be listened to. [9]

You read him right! No presence means there is no point and no purpose to this meal. If there is no communication of Christ in and through the bread and wine, then this meal is an exercise in futility. But if Christ is present in the bread and the wine through the Spirit, we have here a means of grace, a harvest of blessings, and a real communion with Christ.

The Anglican tradition has emphasized participation or partaking with Christ in the bread and wine from 1 Corinthians 10:16: “It is a Sacrament of our Redemption by Christ’s death: insomuch that to such as rightly, worthily, and with faith, receive the same, the Bread which we break is a partaking of the Body of Christ; and likewise the Cup of Blessing is a partaking of the Blood of Christ.”[10] For the Anglican Richard Hooker, Christ is encountered in the Eucharist as fully human and divine; this is accomplished by the Spirit, by whom communicants are transformed as they partake of Christ’s holiness and virtue. He wrote that in the Eucharist is “a true and a real participation of Christ, who thereby imparteth himself even his whole Person as a mystical Head unto every soul that receiveth him, and that every such receiver doth thereby incorporate or unite himself unto Christ as a mystical member of him, yea of them also whom he acknowledgeth to be his own.”[11]

In light of all this, we need some eucharistic charity, as all Christians traditions share something in common by affirming the memory, proclamation, and presence of Jesus with his people in the Eucharist. As a possible consensus statement, the Leuenberg Agreement, a joint ecumenical statement between Lutheran and Reformed churches composed in 1973, states: “In the Lord’s Supper the risen Jesus Christ imparts himself in his body and blood, given for all, through his word of promise with bread and wine. He thus gives himself unreservedly to all who receive the bread and wine; faith receives the Lord’s Supper for salvation, unfaith for judgment.”[12]

If we can all agree that that the Lord’s Supper is a gospel meal, then it makes perfect sense that, irrespective of how we understand presence, we will eat and drink together precisely to remember and experience afresh the Lord of the gospel. The Eucharist is for all a thanksgiving to the Father, a remembrance of Christ, an invocation of the Spirit, a communion of the faithful in the body and blood of Christ, and the meal of the kingdom.[13] Ultimately it is beyond our understanding as to how we meet Jesus in bread and wine through the Spirit. We would do well to be like Calvin and insist that the operation of the Spirit in the Eucharist is something we would “rather experience than understand.”[14] 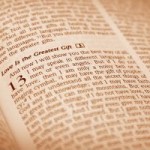 January 13, 2020
Can We Apply the New Testament Household Codes Today?
Next Post