Grant Macaskill’s Living in Union with Christ: Paul’s Gospel and Christian Moral Identity (Grand Rapids, MI: Baker, 2019) is a new book about Paul’s notion of participation in relation to Christian identity and ethics.

Macaskill’s chief concern is how one should (and should not) relate Paul’s notion of justification, sanctification, and self together. Too much popular evangelicalism has its soteriology and sanctification reducible to grace to get in but works to stay in view! What is missing, Macaskill believes, is a comprehensive and fullsome account of participation in Christ.

Macaskill thinks Paul does not have a get-in-by-grace and stay-in-by-works view. He also critiques N.T. Wright for not paying attention to the pneumatic character of Christian agency in relation to self and ethics (Volker Rabens makes a similar complaint). Macaskill also worries that Wright’s focus on vocation can easily lead to a type of moralism. He chides Wright too for avoiding the classical theology, two-natures Christology and Trinitarianism, which offers a cache of resources that go unused. Then, Macaskill argues that Stoic/virtue ethics are inadequate because unlike the Stoics, Paul was not concerned with becoming a better version of the self, rather, with becoming a new self. Macaskill locks horns with the apocalyptic Paul on the grounds that: they often speak of Christian life in a way that suggests that experience of moral development is immaterial to salvation and he critiques Doug Campbell that Protestant theology can be reduced to an Arian foundationalism vs Athanasian participationism divide. Similarly, Macaskill takes issue with an emphasis on imitation as the key to ethics (e.g. Burridge), esp. when it is isolated from participation it results in a mere moral heroism. On this latter point I agree that participation and imitation go together, however, I think Macaskill really does lessen the import and significance of imitations which is paramount in the NT. 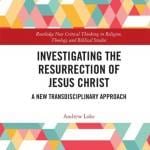 May 10, 2020
Andrew Loke's New FREE BOOK on the Resurrection of Jesus
Next Post

May 16, 2020 Is the Righteousness of God the Gift of Righteousness?
Recent Comments
0 | Leave a Comment
"A very helpful video, Mike. Thanks for taking the time to make it and post ..."
Randy Richards Can Christians Commit the Unforgivable Sin?
"The condemnation of Rom.8:2 is death's reign. And yes, those who believe in Jesus are ..."
edwitness What Happens in the Lord’s Supper ..."
"Right, to those who are in Christ, there is no longer any condemnation. If you ..."
Ed Senter What Happens in the Lord’s Supper ..."
"The text of Joshua seems clear that the inhabitants of Canna were annihilated as in ..."
the old scribe Lost World of the Israelite Conquest
Browse Our Archives
get the latest from
Euangelion
Sign up for our newsletter
POPULAR AT PATHEOS Evangelical
1