“Come, eat of my bread and drink of the wine I have mixed.” Barbara Reid uses the invitation of Woman Wisdom in Proverbs 9.5–6 as a lens for accessing her feminist readings of Old and New Testament texts. Reid is professor of New Testament at Catholic Theological Union, Chicago, and a Dominican Sister of Grand Rapids. She is General Editor for the Wisdom Commentary Series, and has received the Yves Congar Award for Theological Excellence from Barry University (2017), St. Martin DePorres Award from the Southern Province Dominican Friars (2016), Jerome Award from Catholic Library Association (2012), Theological Award for Distinguished Women Theologians from the College of Mount St. Joseph (2010), and the Sophia Award from Washington Theological Union (2000). She wrote Wisdom’s Feast for the general reader, as an introduction to feminist biblical scholarship.

A variety of female voices is introduced, including womanists, mujeristas, and eco-feminists. Reid acknowledges that she is a ‘white, middle-aged, well-educated woman from a lower-middle-class family’, who has experienced life with people from other parts of the world. She lists seven steps for feminist liberationist writing from Elisabeth Schüssler Fiorenza: begin with women’s experience, identify the interpreter’s social location, ask “Who says?”, evaluate: what does the text do?, unleash creative imagination, re-member and reconstruct, and take action for transformative change.

The book includes seven major chapters, ‘Creation of the World and Humankind’, The Entry of Sin into the World and its Aftermath’, ‘Parables of Female Godliness’, ‘Mary: Prophet of a New Creation’, ‘Women Healed and Healing’, Deacon Phoebe and Other Women Ministers’, ‘Mary Magdalene, Junia, and Other Apostles’, ‘Pitting Mary Against Martha: Conflicts over Women’s Roles’ and ‘From Death to New Life’.

In ‘Parables of Female Godliness’, Reid examines three parables in Luke which use feminine images for God: ‘a bakerwoman’ (Luke 13:20–21; also found in Matthew 13:33), ‘a woman searching for a lost coin’ (Luke 15:8–10), and ‘a widow who confronts an unjust judge’ (Luke 18: 1–8). In the Lukan story of the bakerwoman, Reid notes that the kingdom of God is like the yeast which the woman adds to ‘a huge amount’ of flour, ‘–about fifty pounds’ (around 45 kilos). This amount of flour, equivalent to the Old Testament ephah (a volume measurement, around 93 US cups or 23 litres) was used by Sarah in preparing for the three visitors (Genesis 18:6), in Gideon’s offering (Judges 6:19), and in Hannah’s offering (1 Samuel 1:24).  The ‘large-scale baking’ in these OT contexts preceded a significant action of God, and the woman’s baking in Luke may resonate with these earlier stories. The woman who searches for her coin images God in Luke 15, though most preachers focus on the lostness of the coin. The widow in Luke 18 seeks justice, though it would normally be the role of a male relative to act on her behalf. Jesus uses her as a model of faith. Reid suggests she is an ‘icon of Jesus’ who persisted in seeking truth.

In her examples, Reid shows how a female perspective can raise useful questions and uncover helpful understandings of the texts. Though readers may not agree with every point, they are likely to gain fresh insights into Scripture from this book. There are discussion questions and a short bibliography at the end of each chapter. The book concludes with a Bibliography, Subject and Name Index, and Scripture Index. 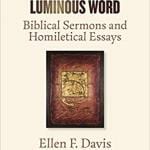 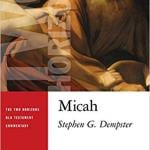 July 28, 2020 Micah in the THOTC
Recent Comments
0 | Leave a Comment
"Michael:Good series on Matthew and Paul. Your articles jumped from #2 to #4 - where ..."
David Lindsay Matthew and Paul Agreements # 4 ..."
"Right, Michael -- if I understand you correctly, you are indicating a transference of ideas ..."
tovlogos Two Types of Divinity and the ..."
"Well, God did promise to bless Israel materially in exchange for the people obeying his ..."
Roger McKinney God Promises Blessings Not Prosperity
"I whole heartedly agree with you...Unfortunately American Christianity especially on the evangelical side has distorted ..."
Charlie Rivers God Promises Blessings Not Prosperity
Browse Our Archives
get the latest from
Euangelion
Sign up for our newsletter
POPULAR AT PATHEOS Evangelical
1

Unbelievable, But True
Preventing Grace
Books by This Author Books by Mike Bird