The Exodus Story and Women

Kelley Nikondeha
Defiant: What the Women of Exodus Teach Us about Freedom
Grand Rapids, Eerdmans, 2020.
Available from Eerdmans

Kelley Nikondeha grew up in California, and after seminary became involved in ministry in Burundi, where the local women helped her to re-envision the role of women, compared with her American Evangelical cultural background. With her husband Claude, she began a rural development project in Matara, eleven miles from the capital city. She is the co-director of Communities of Hope, a community development enterprise in Burundi, the cofounder of Amahoro Africa, and the author of Adopted: The Sacrament of Belonging in a Fractured World (2017).

In Defiant, Nikondeha traces twelve women of the book of Exodus, with chapters on Shiphrah and Puah (the Hebrew midwives), Jochebed (Moses’ mother), Bithiah (Pharoah’s daughter), Miriam (Moses’ sister), the seven sisters of Midian (daughters of Jethro), and Zipporah (Moses’ wife). Women can be relegated to the background of our understanding of biblical narratives, but they played key roles in God’s purposes. Nikodeha also considers American women pioneers like Harriet Tubman and Dorothy Day, and the NASA mathematicians featured in the movie Hidden Figures, Katherine Johnson, Dorothy Vaughan, and Mary Jackson. Though she had known these stories while growing up, the women of Burundi helped her to see that strength and determination were a feature of all women, not just some extraordinary exceptions.

Each chapter includes an imaginative reflection on the women in the story of the book of Exodus, and then a parallel story from American history, her experience in Burundi, or other international settings. The courage of the Hebrew midwives Shiphrah and Puah is followed by consideration of Rosa Parks and others involved in the bus boycotts of the 1960s, recent protests by women about the separation of children from parents in American immigration centres, and systemic racism in South Africa after the end of apartheid. Personal stories are intertwined through the narrative of her own adoption, of Claude, her husband from Burundi, and her children’s lives, spanning both America and Burundi. Nikondeha further grounds her reflections in the everyday lives of her friends in America and elsewhere.

The final chapter returns to Miriam, whose story is enlivened by the image of the rural women of Burundi drumming as they gather the community, as Miriam also carried a drum. Miriam’s song of freedom in the exodus echoes down from Miriam to Jesus’ mother Mary (also named Miriam in her own day) and to Mary Magdalene, another Miriam, and invites women today to join in believing and acting as part of “God’s grand reversal.” Nikondeha concludes “The women of Exodus remain strong archetypes for us . . . We are Miriam’s descendants . . . It is our turn to carry Miriam’s drum.” The book includes study questions and endnotes.

This book is thoughtfully built from the author’s research and personal experience. The biblical characters are richly imagined, and the chapters invite readers to reflect on working against injustice today. The insights from Burundi are pure gift, and the many international and American stories earth the author’s proposals in everyday experience.

The book may be most valuable for others who share Nikondeha’s experience of American Evangelicalism, where women may be assigned to “women’s ministry, serving in the nursery, or teaching children in Sunday School.” Nikondeha comments that this was “not for me.” Nor did she fit the pattern of softly spoken pastor’s wives in floral dresses whom she describes in the Introduction. She laments, “There were no models who sparked my imagination.” Her exploration bringing together exegesis, meditation, and imagination can offer a way forward into a clearer understanding of God’s vision for women today. 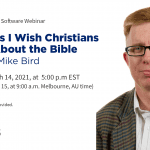 March 10, 2021
Live Interview with Logos about 7 Things I Wish Christians Knew About the Bible
Next Post

March 13, 2021 Mike Bird is now on Substack
Recent Comments
0 | Leave a Comment
Browse Our Archives
get the latest from
Euangelion
Sign up for our newsletter
POPULAR AT PATHEOS Evangelical
1