Is the Old Testament a Christian Book?

Is the Old Testament Christian Scripture?

There has been a widespread response—coming mostly via email and direct message—to a particular hermeneutical dynamic in my recent book, The Next Christian Faith: A Brief Sketch—(kindly endorsed by Mike Bird, among others)—that has somewhat surprised me. Throughout, I presuppose but also directly argue for a particular hermeneutic of the Old Testament that I take to be among the few that are genuinely Christian.

To illustrate the point, I sometimes ask my students at Houston Baptist University, “If we were to dig up, say, the book of Job somewhere in the land of Israel, and if, furthermore, there never had been any such person/thing as Jesus of Nazareth, the New Testament, and the subsequent Christian tradition, would this book—that is, the book of Job—be a Christian text?”

To be sure, it’s a bizarre question for a number of reasons. After all, if there never had been any such thing as “Christianity,” it doesn’t make very much sense to ask whether something is “Christian” or not? Nevertheless, the question does have its own point to make.

It goes something like this: Is the Old Testament, historically-critically read and treated without reference to its relation to, and its reception in, the New Testament, Christian scripture? And, if so, in what sense?

Now, some will wonder whether or not this line of questioning is not at least “semi-Marcionite” (Marcion was a famous 2nd century heretic who, among other things, rejected the Old Testament as Christian revelation). It isn’t—or, at least, it isn’t any more “Marcionite” than the hermeneutic presupposed in, for example, 2 Corinthians 3.14; John 1.1–18; sundry other New Testament texts; and many of the Jewish texts of the period (for example, the Dead Sea Scrolls).

To be crystal clear, however, this does not mean that the Old Testament, historically-critically read, has no constructive role to play in Christian theology. It does. Without this historical-critical reading, and without a historical-critical reading of the way in which the Old Testament was read and appropriated in the second temple Jewish context of earliest Christianity, we have no hope of historically locating the revelation of God in Christ.

Furthermore, there is, of course, a necessary historical and theological continuity between the Old and New Testaments. And Jesus and the New Testament claim to be nothing other than the (however surprising) fulfillment of the Old Testament narrative.

However, Christians are committed to the claim that ultimate theological authority resides with Jesus himself, a Jesus whose person and work are authoritatively revealed in the New Testament and in its authoritative reception of the Old Testament.

This is not Marcionism. Jesus is a first century Jew. The New Testament writings are second temple texts written almost exclusively by second temple Jews. “Earliest Christianity” is simply a particular, messianic brand of second temple Judaism, with its distinctive (though not unique!) appropriation of Old Testament texts, traditions, and hopes.

But it is this distinctive appropriation—however difficult it is to analyze and to describe in practice—that is theologically normative for the Christian tradition.

So, is the Old Testament Christian Scripture? Of course, insofar as it is the proper historical, conceptual, narratival, canonical, and theological context within whose dramatic and open-ended unfolding Jesus and the New Testament were designed to make, a Jesus and a New Testament from whose vantage point alone we can see the whole Scriptural story Christianly. 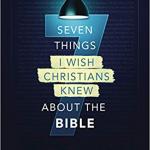 The Real Reason Why Scandinavians Are...
Cranach
Books by This Author Books by Mike Bird