We Are All Philosophers – John Frame

Christian philosopher and theologian, John Frame, opens this little volume by noting his desire, after completing the monumental History of Western Philosophy and Theology, to provide an introduction to philosophy “that would be a bit less burdensome to the average reader.” (p. XI). Such is the intent that led to the formation of We are All Philosophers: A Christian Introduction to Seven Fundamental Questions.

This book addresses seven fundamental philosophical questions from a Reformed perspective. Chapter one considers basic metaphysics, or seeks to answer the question “what is the world made of?”.  Chapter two turns to human persons, and reflects on the nature of free will or human agency. The third chapter unpacks questions of epistemology—the content and constraints of human knowledge. Chapter four explores the question of the existence of God. The book then turns to a consideration of ethics, with chapter five focusing on frameworks of moral obligation, and chapter six considering the flip side of obligation, namely, a being’s rights. A final chapter considers a question often not covered in philosophical texts, though, as Frame notes, one nonetheless deeply warranted by their subject matter, namely: How can I be saved? Each chapter begins with a basic introduction to how the question has been asked historically, and then turns to consider it with reference to Scripture.

While each chapter addresses a different area of philosophical enterprise, each also clearly builds upon what has gone before with the intent that one would read the book through in a linier manner and not as a pocket handbook.

As the title of this book indicates, its target audience is not elitist but rather people in general, in particular “beginning philosophy students (college and seminary level, even some high school)”. The book is consistent in aiming to speak to this target audience, remaining succinct and clear throughout, thus serving well those with little to no prior knowledge of philosophy.

A useful glossary of terms has been added to the end of each chapter. Each chapter also concludes with a list of questions for discussion, making the book suitable for class, mentoring, or small group discussion.

One critique is perhaps warranted: it did come as a surprise to find that a solid half of an already slim volume is devoted to selections from Frame’s personal correspondence on various philosophical questions. Some readers will find these letters beneficial, however, for the reader who finds the first half of the book less comprehensive than anticipated, the letters might read more as “filler” of space they wish had been dedicated to a fuller treatment of the seven questions than as integral to the book’s message. However, Frame helpfully does have much more comprehensive works available to such a reader, to which he points throughout. Thus, all in all, We are All Philosophers proves a suitably readable introduction to a Reformed position on several very significant philosophical questions. 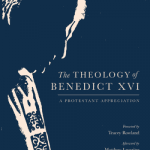 June 11, 2021
The Theology of Pope Benedict XVI
Next Post

June 17, 2021 Telling a Better Story: How to Talk About God in a Sceptical Age
Recent Comments
0 | Leave a Comment
"Good points! This passage us similar to Ephesians 6 telling women to submit to husbands. ..."
Roger McKinney Romans 13:1-7 – Translates, Paraphrase, and ..."
"Good questions. Thanks for your interaction. I just saw this post, so I am just ..."
Joshua Theological Anthropology Rejigged
"I think a textual case can be made that prototikos also means pre eminence"
rdbipb Christ as “Firstborn”
"Hello Friend, I read your article this is good for anyone. Love is God and ..."
Godsyou Preaching the Word with John Chrysostom
Browse Our Archives
get the latest updates from
Euangelion
and the Patheos
Evangelical
Channel
POPULAR AT PATHEOS Evangelical
1