Get newsletters and updates
Close
get the latest from
Faith and Business 2.0
Sign up for our newsletter

Get updates from Faith and Business 2.0 delivered straight to your inbox 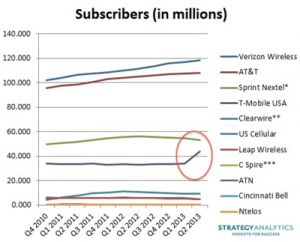 The robust gains are clearly the consequence of T-Mobile’s recent marked departures from the prevailing U.S. wireless business model, a model notable for its blatant anti-customer ethos. In March the company abolished the annual contract with its ‘Simple Choice’ service plan. In July they announced that customers would be allowed to upgrade their phone whenever they wanted. In October the company began offering unlimited data and texting for customers in more than 100 countries. Most recently, it offered free data for tablets. T-Mobile CEO John Legere summed up the new business model, and its results, this way: “T-Mobile’s Un-carrier approach is resonating with customers because we are fixing the things that drive customers crazy.”

Drive customers crazy? Two-year, lock-in contracts? Check. Service plans that force customers to buy more service than they need because the cost for going over one’s minutes/data/text limits is so punitive? Check. Keep paying the same high rates, even after one’s subsidized phone has been fully paid for? Check. Upgrade to a new phone only when your carrier allows (typically at end of contract)? Check. Pay exorbitant rates to use your phone outside of U.S.? Check. (Full disclosure: shortly after getting my original iPhone, I traveled to Southeast Asia for a few weeks, never making a single phone call. I returned to a $2000 phone bill from AT&T for quite modest use of my phone to read and send emails.) Yes, Mr. Legere, your industry does drive us crazy — precisely because it seems so determined to take advantage of its customers, so determined to put its own immediate profits ahead of the interests of its subscribers.

While bad profits don’t show up on the books, they are easy to recognize. They’re profits earned at the expense of customer relationships (emphasis added). Whenever a customer feels misled, mistreated, ignored, or coerced, then profits from that customer are bad. Bad profits come from unfair or misleading pricing. Bad profits arise when companies save money by delivering a lousy customer experience. Bad profits are about extracting value from customers, not creating value (emphasis added).

Reichheld makes clear that many companies, even entire industries, are addicted to bad profits. Their business models depend, to varying degrees, on exploitation. One of the easy targets he focuses on, not surprisingly, is the telecom industry:

If you are a patient, loyal user of your telephone company, your mobile-phone provider, and your Internet-service company, chances are good that you are paying more than disloyal switchers who signed up more recently. In fact you’re probably paying more than you need to, regardless of when you signed up, just because you didn’t know about some special package the company offers. Customers who discover an extra charge of $20, say, for using text messaging find that unlimited text messaging is available for $5 per month — if only they had asked for it in advance.

Perhaps no other industry is as addicted to bad profits as is wireless telecom (unless one counts Wall Street investment banks, which probably win hands down). Seemingly at every turn, wireless customers find themselves on the short end of policies and pricing schemes designed to pad the carriers’ profits at their expense. Most of them feel more like victims than customers.

Scripture teaches that a good God created this universe, and ordered it such that both good and bad conduct is, generally and over time, rewarded in kind — we ‘reap what we sow,’ (Galatians 6:7). And ‘Love your neighbor,’ the First Principle of God’s moral universe, is the reference point by which our actions are assessed, and the watershed divide by which our outcomes, whether blessing or blight, are determined — business outcomes very much included.

Business loves its neighbors by creating value for them. When business does so, when it creates substantial value for customers (and others) by serving them well, it reaps blessing. Both people and business flourish. Of course, business can do the opposite, it can serve itself at the expense of customers (and other neighbors). In which case, rather than creating value, business extracts value. Scripture refers to this dynamic — to taking value from those to whom it belongs — as ‘stealing’ and ‘plunder’ and says it brings death to all involved (see Proverbs 1:10-19). Such plunder businesses both sow — and reap — blight.

This is no mere theological theory. It plays out over and over in the ‘real world.’ Back to T-Mobile. Having embraced a ‘Serve/create value’ approach instead of the ‘Be Served/extract value’ model so characteristic of its industry, customers are flocking to T-Mobile. According to Legere, “Since we launched Un-carrier, T-Mobile has grown faster than everyone else, and we have added more postpaid customers than Sprint, AT&T and Verizon combined.” In turn, third quarter revenues are at $6.7 billion, up 37% from Q3 2012. Similarly impressive, the company’s share price is up 62% since their IPO in May. For their competitors, still stuck in the ‘serve ourselves at the expense of our customers’ approach, not so great: year-to-date share gains in the single digits for AT&T, mid-teens for Sprint and Verizon.

When Reichheld discussed bad profits, he may have meant that these are profits earned unethically, immorally. But he certainly meant that they are profits earned foolishly, unwisely. Why? Because bad profits — profits earned by taking advantage of customers — sap future growth. Unhappy customers defect. Even worse, they often tell others about their unhappiness. These days, in fact, they take to social media and broadcast their unhappiness to the world. As a result, organic growth tanks, leaving companies struggling to prop up growth artificially through aggressive advertising and promotion.

This is hardly an isolated problem. A Bain & Company study found that over a 10 year period, only 22% of the world’s largest companies managed to eke out sustainable growth rates of 5% per year. Hardly surprising, since Bain also determined that the large majority of companies make nearly as many unhappy as happy customers.

Happy customers lead to growth, unhappy customers to decline. The cellphone carriers, addicted to bad profits, are awash in unhappy customers. As a result, they have been stuck trying to prop up anemic growth for years (‘buy one, get two free’). No wonder, then, that T-Mobile’s decision to turn away from the exploitive practices that ‘drive customers crazy’ is finding such success.

In fact, Legere considers that to be T-Mobile’s primary competitive advantage: “I felt that as a challenger we might just have a pretty amazing opportunity in front of us. We could take a completely different approach to this business — we could create real customer value by driving serious change in this ridiculous and broken industry.”

March 24, 2016 Love in Business
Recent Comments
0 | Leave a Comment
Browse Our Archives
get the latest from
Best of Patheos
Sign up for our newsletter
POPULAR AT PATHEOS Faith and Work
1

What is "The Gospel" in 1...
(re)integrate
Related posts from Faith and Business 2.0

Faith and Work
The Price of Eggs
Faith and Business 2.0

Faith and Work
Jesus and the End of Jobs
Faith and Business 2.0

Faith and Work
Killing the Golden Goose
Faith and Business 2.0

Faith and Work
Business and the Poor — Predator, Protector, or...
Faith and Business 2.0
TRENDING AT PATHEOS Faith and Work