Why We Should Give in Secret

Our mission in life is to glorify God in all that we do—when we give in public that may not be exactly what’s happening. It could be our secular selves rising to the surface.

How the world gives

When the secular world gives it’s often with considerable public fanfare, and even trumpeted in the media. The giver is exalted for his generosity, the charity for it’s new resource, and all of society celebrates the basic goodness of humankind.

The giver is often rewarded by having his or her name included on buildings, roadways, parks or what ever is connected with the beneficiary. But the giver often gets other benefits as well, and those benefits may be one of the primary reasons for the gift.

For one thing, charitable giving typically creates tax benefits. For another, it could be an attempt to soften criticism against the giver or to somehow portray him in a more positive light. It might prove that the giver is a solid citizen and a significant member of a community, group or organization. All afford some benefit to the giver beyond just giving because it’s the right thing to do.

If you’re a non-Christian, there’s nothing wrong with this type of giving.

Do not seek your reward before men

If you are a Christian this is not the way to give, at least if we can avoid it. Public giving is usually a way of seeking favor among men. The Bible tells us to seek favor from God alone. Even worse, by giving publicly we call attention to ourselves. God isn’t glorified by our giving, we are.

Giving to those outside recognized charities

It’s pretty easy to measure giving when it’s done through organized charities, but how strong is our generosity in giving to those who are not part of such a charity? I’m talking about people around us who are in need. There’s no tax deduction for that kind of giving and little potential for any sort of public recognition. But this may also be the ultimate test of our giving.

In Matthew 25:34-40, Jesus gives us some idea how important this kind of giving is.

“The King will reply, ‘Truly I tell you, whatever you did for one of the least of these brothers and sisters of mine, you did for me.’”

Giving to “the least” among us is God’s preferred way for us to give, perhaps because we will receive no benefit for doing it. And notice that it’s giving food, drink, shelter, clothing or care—time and effort. Those aren’t as easy to measure and recognize as money is.

Don’t flaunt your tithe either!

There are different ways to go public about giving, and they don’t always involve dollars and cents. Percentages work just as well. Declaring that you give 10% of your income to the Church, or that you give more than 10%, can be a way of glorifying yourself or seeking the favor of men.

Give, but don’t declare your giving to the world.

What Jesus tells us about how to give

Jesus gives us very specific instructions on how to give—and how not to give:

“Be careful not to practice your righteousness in front of others to be seen by them. If you do, you will have no reward from your Father in heaven. So when you give to the needy, do not announce it with trumpets, as the hypocrites do in the synagogues and on the streets, to be honored by others. Truly I tell you, they have received their reward in full. But when you give to the needy, do not let your left hand know what your right hand is doing, so that your giving may be in secret. Then your Father, who sees what is done in secret, will reward you. “—Matthew 6:1-4 (NIV)

Jesus is describing true charity here—we get no credit from Man for our generosity. People are helped, God is glorified by our efforts—and our secrecy—and we are rewarded by our Father in Heaven.

Have you ever thought about giving this way? 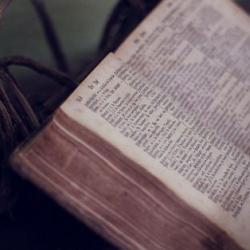 Evangelical
Do you have the spiritual gift of giving?
Faith and Finance

Evangelical
How to Give Amongst So Many Opportunities
Faith and Finance