Florence, The Machine, Faith, and Me (Part 1) 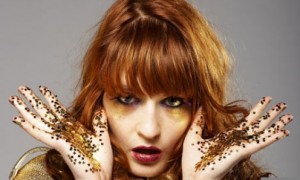 Faith Goes Pop is thrilled to announce its first-ever guest blogger. Jessica Misener is a graduate of Yale Divinity School and an editor for the Huffington Post. This post is the first in a two-part series.

I’m 17 and nestled in a dark church gym in Florida, my teenage self propped up in a cheap plastic folding chair, watching a worship band pump out music to our Pentecostal youth group. Our youth pastor, drenched in yellow and red stage lights, is sporting a plaid shirt and soul patch and is wailing tamely on his electric guitar, eyes shut, face proffered up towards heaven (or the ceiling). In the back, a drummer pounds enthusiastically on a set of Zildjians. Teen girls, in their melodramatic way, sing backup vocals into microphones. All in all, it looks more Coldplay than choir.

“You are the air I breathe,” he croons. The music soars, the key shifts, and all over the shadowy gym hands begin to raise in that evangelical “surrender” signal. People spontaneously jump to their feet; some abandon the confines of their rows for the aisles. Next to me, my friend, a high school classmate of mine, begins to murmur: “Yes, God; please, Lord.” As the power chords churn out through the gym, loud and propulsive like at a rock show, I start to feel pangs of transcendence, like the walls are inching away as a bigger force began to take over. It’s a feeling I’d never been exposed to before, and it was one I wouldn’t know what to make of for a long time.

Those emotional youth group services were the first steps of my teen journey from agnosticism—really more of an indifference, since my parents had simply never taken us to church—into born-again Christianity, a movement I’ve since drifted away from, but one that shaped a lot of my youth and formative years.

As a kid, I’d always been interested in music. I learned piano early on and started writing some of my own songs. During my periods of teen angst, I’d hole up with my CD player and listen to Tori Amos and Pearl Jam on repeat, letting the words and notes seep into my psyche. When I came around to religion just a few years later, music was a keen part of the emotionally-charged Pentecostal church that sent me into an exploration of my own spirituality.

Ten years later, I’ve been spending a lot of time with my iPod listening to the new Florence + the Machine record, Ceremonials, which I also reviewed for Under the Radar magazine. Welch appeared as the musical guest on “Saturday Night Live” this weekend, her red-hair cascading in pre-Raphaelite waves as she sang her hit “No Light, No Light” with eyes cast up towards heaven, sending a breathless paean to someone or something. Wavering between stoicism and mania, sometimes shaking like a possessed St. Teresa, her energy vibrated with emotion. You could tell she was taken by her own words.

I saw Florence in concert last year at [New York venue] Terminal 5, and her forceful music and live presence transported me back to those dim nights in a church gym, only now I was tucked into a larger crowd with a steady flow of secondhand pot smoke.  Welch stalked the stage in a gauzy gown, stabbing the air with a drumstick as she commanded us with her strong voice and arresting stage dynamics. “I see you with someone else,” she sang out, wielding her drumstick weapon at us, “I brace myself, ‘cause I know it’s gonna hurt.” The audience around me sang along, and I could feel, just as I had at church years ago, the momentum of group catharsis swelling up. It was as if Florence-cum-worship-leader were uniting us with a universal emotion: the pain of an ex moving on to someone new. I could almost sense the tension of it rising up from the anonymous concertgoers around me as they chorused along with her.

December 16, 2011
Diablo Cody's Next Project Will Be About Religion
Next Post