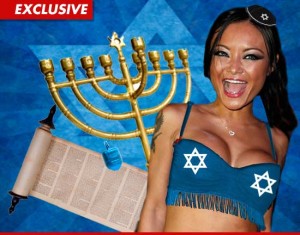 Reality star Tila Tequila, who is best known either for her Vh1 reality show A Shot at Love or for being the only person who can still say they are famous on MySpace, has announced her plans to convert to Judaism. However, her description sounds confusing – she’s either doing a Reform conversion or getting involved with Kabbalah. More likely, she’s joining the Temple of Please Pay Attention to Me Again.

“As time passed, I started to become more and more fascinated with Kabbalah, the culture, and the way of life of the reform Judaism religion,” she told TMZ, who mocked up the awesome photo you see above. “I just feel like the Jewish people have such a beautiful way about them, and I can’t wait to officially be Jewish! Shabbat Shalom.” I guess this means I’ll be seeing you at shul, then?

January 13, 2012
Matisyahu Did a Lot More Than Shave Off His Beard
Next Post