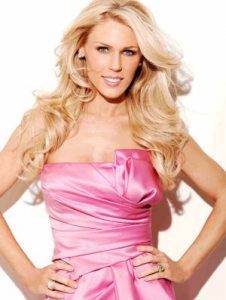 This season on The Real Housewives of Orange County, longtime rivals Gretchen Rossi and Tamra Barney shockingly made up after years of hating each others’ guts. What led to the reconciliation? God, apparently.

Gretchen attends pastor Rick Warren‘s Saddleback megachurch in southern California. Apparently, it was a sermon that made her reconsider her relationship with Tamra. “Literally an Act of God helped change my way of thinking,” Gretchen wrote in her Bravo blog. “I was attending church after the reunion show one weekend and the sermon was about forgiveness.” After that, she signed up for daily devotional emails and began meditating on the concept of forgiveness. Now, she and Tamra are in each others’ good graces, but I am sure the show will find some other source of conflict.