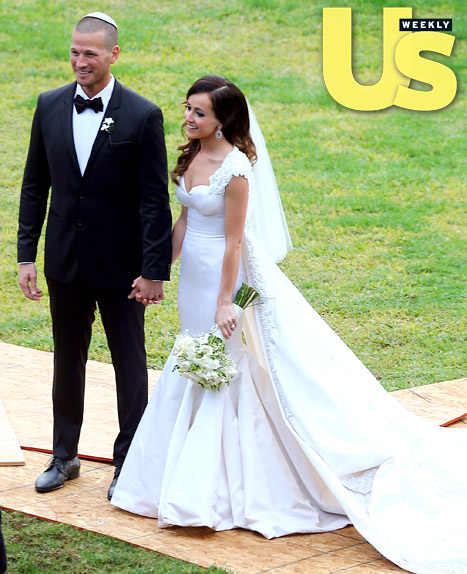 The Bachelor franchise just hit its third wedding. That’s one couple from The Bachelor (Jason Mesnick and Molly Malaney), and two from The Bachelorette: Trista Rehn and Ryan Sutter, and now Ashley Hebert and JP Rosenbaum. I actually watched the entire Ashley season because I was recapping it then, and as much as I think the show can be annoying they really seemed like a good couple who were well-matched for each other. As per the show rules, Ashley and JP’s wedding will be televised on ABC on December 16.

Until the wedding actually airs, though, all we know is what’s in this Us article, which shows JP wearing a yarmulke. Ashley’s background is Catholic, while JP’s is Jewish, and it sounds like the couple has decided to have an interfaith marriage. Us reports that at the ceremony the bride and groom did a Celtic knot ritual and also had JP step on a glass, thus bringing in a little from both traditions. It’s no Joe Biden doing the hora, but these kids are pretty cute together and I hope they have a long, happy marriage. Mazel tov!

December 5, 2012
Lisa Welchel Makes It to Final Six on 'Survivor' and Gets a Visit from Her Pastor Brother
Next Post

December 13, 2012 TLC's New Reality Show 'The Sisterhood' Is Like 'Real Housewives' With Pastors' Wives
Recent Comments
2 Comments | Leave a Comment
Browse Our Archives
get the latest from
New Visions
Sign up for our newsletter
POPULAR AT PATHEOS New Visions
1