TLC really loves its reality shows about religious groups – they already produce Sister Wives and 19 Kids and Counting, both of which I enjoy covering exhaustively. They also produced the controversial-yet-extremely-boring Muslim in America, which got cancelled more because of the boredom than the controversy. Next up: a show called The Sisterhood, which is about a group of pastors’ wives in Atlanta. The show premieres January 1.

The concept of the show seems to be The Real Preacherwives. There’s some drama, although they’re yelling about Satan instead of calling each other sluts. The women also talk about how their lives aren’t all purity and innocence – one shows off a pair of handcuffs and says that she and her husband have a great sex life; another says that before turning her life around she was a drug user. “If you knew who we truly are,” one of the wives says in the promo, “you’d be shocked.”

How long before there’s a Real Housewives of Atlanta cross-channel promotional episode? Atlanta Housewife Kandi Burruss was also in Xscape so it’s totally possible that she and Ivy already know each other. Bring it on! 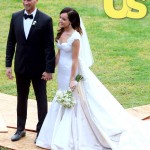