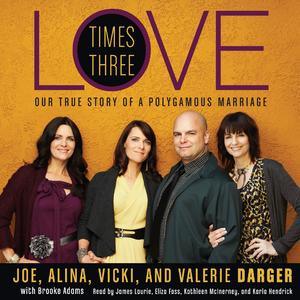 Just like the Duggars begat the Bateses, the Brown family of TLC’s Sister Wives has begat the Dargers. It seems like once every TLC reality show starts to get a little stale or repetitive the producers bring in another family for their stars to hang out with. Recently, the Dargers were featured on Sister Wives as a fellow polygamous family. On the show, we met husband Joe and wives Alina, Vicki, and Valerie. (The latter two are twin sisters, which … ick.)

I don’t know if the Dargers, who were reportedly the inspiration for the HBO series Big Love, will get any more screen time on the show, but in the meantime they have a blog called Love Times Three that chronicles everything going on in their lives. (Note: if you like proper spelling and grammar, you may have to take an aspirin before reading their site. The repeated use of “Sisterwives” as one word is particularly annoying.) In a post, Joe & Co say that they knew the Browns before the TV show happened:

The Browns are a family for which we hold a tremendous amount of respect. Having endured much scrutiny ourselves, we understand what they have risked personally and emotionally to be so open. We met the Brown’s before they became public and knew them to be sincere, devout and devoted to their family.

They used that experience to discuss their own trials and tribulations as public polygamists:

For our family, the journey becoming public began about eleven years ago, with the death of our daughter Kyra and the investigation that followed.  It became very apparent that our plural family and the stereotypes that surrounded polygamy were a factor in the investigation. We were extremely afraid of what would happen to our other children and also very angry about the biases that existed toward us simply because we were a plural family. We vowed from then on to be a force for educating people from polygamous cultures about their rights and also educating the public about whom plural families really are. We started cautiously giving presentations in Utah to our local service providers such as police officers, child services, university groups and educators. This led to further presentations in Texas, Arizona and Nevada as well.

The Dargers have a book, also titled Love Times Three, which you can find on Google Books.  Here’s a clip of them on Dr. Phil.

December 3, 2012
The Duggars Are Going to China
Next Post

I Stood Up to My Stepson's...
Race & Grace
Related posts from Faith Goes Pop