Ralph, you’ve gotten into a bad spot with fellow LDS intellectuals from a lot of different fronts.  My concern with your recent editorializing is that while you claim to appeal to “reason” and to contradict the “fundamental assumptions” of “liberal Mormons,” I don’t see anything substantive in your arguments that amounts to anything more than 1) appeal to prophetic and “majority” authority and 2) vague assertions about what a fictionalized anthropologist might say about the value of normative sex roles.  With respect to #2, suffice it to say that your assertion reflects a misunderstanding of how anthropologists deal with gender norms (anthropologists are more likely the “relativists” you condemn than offering a defense of the kinds of assertions you’re making).  With respect to #1, certainly appeals to authority are important for certain kinds of claims, but they should not be confused with the appeals to “reason” that you assert you are making.  One could certainly argue that Mormons should accept the authority of a particular, even dominant strain of Mormonism, but if such an argument is to arise beyond an appeal to the “authority” of that strain, arguments from reason should be given.  Perhaps you really have real arguments about the problems of equal status for women and non-heterosexual individuals, but so far you have been coy.  Overall, I find your assertions about feminism to be, lets say, shallow in the extreme, but perhaps there is more than what appears to be only a passing familiarity with stereotypes about feminist criticism.  In an effort to draw out your arguments from “reason” in favor of differential treatment, I would like to see you answer a few questions:

2. If there are differences between men and women, why do those identified differences entail different treatment with respect to some things (e.g., priesthood, responsibilities being primarily in the public or private sphere) but not with respect to other things (e.g., education, work, voting, teaching or speaking in church)?  What is it about femaleness that requires exclusion from the priesthood, but not exclusion from being President of the United States?  That is, how does one determine legally or ecclesiastically or normatively which of the various spheres men and women should jointly occupy, which men alone should occupy, and which women alone should occupy?  Are there arguments from “reason” that allow us to clearly determine normative “sex roles”?

3. What is your understanding of the status of homosexual identity?  Is a person mistaken?  Can they change?  Will they change in the resurrection?  On a related note, you admit that there is a lot that you don’t know about sexuality in the afterlife.  In your admitted ignorance on this topic, on what basis do you assert that sexuality in the afterlife is necessarily heterosexual?

4. What are the specific social or ecclesiastical harms that you see resulting from the so-called “extreme tolerance” of women being ordained in the priesthood or homosexuals being sealed in the temple?

5. It is evident that you do not think that society or the Church should condone marriages between people of the same biological sex because it poses some harm to society.  If homosexual marriage should not be permitted by society, on what basis should homosexual sex or relationships also be legal, if at all?  What should society do about homosexuals who form long term relationships independent of the institution of marriage?  Does the existence of these homosexual relationships (independent of marriage) constitute the same threat, a different kind of threat, or no threat to heterosexual marriages? 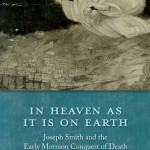 May 8, 2012
A Dearth of Understanding Mormon Freemasonry in Nauvoo
Next Post

Latter-day Saint
Some More on the BYUNTC and Snuffer’s Version...
Faith-Promoting Rumor