Korihor and the Defense of Secularism

Generally, Korihor is understood as a kind of anachronistic representation of secularism by many modern interpreters.  However, it is not at all clear that Korihor represents secularism.  Indeed, his confession notes that a religious experience is what motivated him.

Secularism may be defined in various ways, and indeed has enjoyed a rigorous critical discussion over the past decade or so.  For the purposes of this post, I want to examine just two important ways for thinking about the secular: secularism as the rejection of religion (whatever that may mean), and secularism as the separation of ecclesiastical power from state power.  In brief, I argue that Korihor is not guilty of the first, and the narrator is guilty of the second. Indeed, the text actually argues in favor of this latter kind of secularism!

The narrative about Korihor is framed by the narrator’s digression about law and belief (it is not clear whether this digression is from Alma or Mormon).  The law, it seems, is rooted in an exegesis of Joshua 24:15: “Choose this day whom you will serve.”  This digression is strange for three reasons.

First, why does the narrator feel the need to explain that there is no law against belief?  Who is the narrator talking to?  Why is the narrator defensive about the idea that the readers might assume that Nephite law regulated belief?  The primary readership of the Book of Mormon takes this legal point for granted, so it is puzzling that the narrator clarifies this.

Second, the use of Joshua 24:15 is notable for a few reasons.  (A quick search turned up no critical discussion of this passage and no other known quotations from Joshua, but please direct me to any relevant sources).  Generally, in the legal analysis we have from the Hellenistic, Roman, and Rabbinic eras relies on the Torah, not the prophets.  There are some arguments that Joshua really belongs with the Torah, forming a Hexateuch instead of a Pentateuch. Still, the use of Joshua as the basis of law is distinctive here.  Further, the passage in Joshua itself does not contemplate a choice between belief or non-belief (a rather modern distinction), but rather a choice about whether to worship the Israelite deity or other regional deities.  The narrator has repurposed the passage to articulate a separation of religious authority from state authority, rather than a religious call to chose which deities to devote oneself to. In any case, the development of Nephite legal traditions is also bound to be different from other known parallels.

Third, the narrator begins the story by stressing that no laws could constrain Korihor, but the rest of the story is about Korihor being bound against his will and expelled from cities.  He is put on trial twice in the story, yet the only crime he is charged with is preaching and blasphemy.  Blasphemy, however, is precisely the thing that the law supposedly does not forbid.   The narrator’s insertion of the digression about Nephite law seems in tension with the rest of the story.

What about the content of Korihor’s teaching?  Is he opposing religion?  The answer must be no, if we are to give credibility to his written confession.  The content of Korihor’s teaching is filtered to the reader through the narrator, which renders it somewhat unreliable as a source.  The narrator frames Korihor’s teaching as follows:  First, he argues against predictive prophesies about the coming of Christ.  Second, he argues that some things were not considered sins, apparently extra-marital sexual intercourse.  Third, he argues that exercising priestly power over other people was for the purpose of increasing wealth.  Fourth, he argues that there is no life after death. Finally, Korihor states that he does not believe in God.  Most importantly, however, is that he is actually lying.  He does believe; indeed, he knows that there is God.

These features are understood by some modern interpreters as secularism, or perhaps more precisely atheism or even empiricism.  However, Korihor’s crime is none of these things.  In the source that actually contains Korihor’s written testimony, a different picture appears.  It seems to be that he is arguing against a particular god, namely, the god of the Alma’s teaching.  Korihor reports that his preaching was brought about by a visitation from an angel (who was really the devil) who called him to preach: “Go and reclaim this people, for they have all gone astray after an unknown God.”  Reclaim?  Gone astray?  An unknown God?  This injunction from an otherworldly visitor suggests competition from a known god, who has lost his devotees to Alma and the sons of Mosiah.  Here, we seem to see inter-religious conflict that has arisen from the missionary successes.  If we understand Korihor’s objection as resistance to new teachings about Christ, a previously unknown God, the suppression of perhaps sexual rites or the introduction of a new morality, and resistance to the increased power of Nephite dominance, we may make better sense of his teaching as competing religious beliefs rather than the narrator’s imposition of atheism.

Korihor’s sin that he taught these things disingenuously, lying about what he really believed.  Korihor’s beliefs are not particularly “secular.”  Arguments concerning prophesy, the sinfulness of particular acts including sexual intercourse, and critiques of the power of priestly leaders may all be understood within religious debates, not simply as arguments of secularism. This point may be made more clear with the intertext of the Hebrew Bible, in which all of these ideas appear as disputed points faced by the prophets.

The only thing particularly secular in the story is the description of the laws which protect an individual’s belief.  Indeed, the story itself illustrates the wisdom of distinguishing secular law from religious authority.  The narrator wants to make clear that the punishments brought upon Korihor are the result of divine justice, not human law.  Korihor’s teachings are protected by human law, even though they have divine punishment.  The story, then, lays out a particular justification for secularism–human law can and must protect freedom of religion, leaving matters of judgment and divine justice up to God alone.   The curse Alma places upon Korihor is the result of God’s own judgement. One’s religious convictions may be entirely wrong, but it is God’s prerogative alone to judge: “it shall be unto thee even as the Lord will.”

One final note on this passage.  While the narrator’s thesis here seems to be a defense of secular law and the reservation of punishment for bad religious teachings to God alone, the particular example of God’s justice is especially harsh.  It is Alma who curses Korihor and Mormon who frames his violent death as the justified consequence of not believing in the Lord.  Do modern-day opponents of “Korihors” imagine that their opponents should be cursed, lose economic stability, and be murdered?  In ethical terms, it is difficult not to see these consequences as problematic, and those who label their opponents as Korihor’s should be sensitive to the implications of their judgements.  Though God’s justice is offered as the explanation for Korihor’s fate, Korihor’s murder comes at the hands of humans.  We might be critical of ways in which we (and Mormon) justify violence as the result of our own understanding of God’s punishment of sinners.

August 13, 2013
Doubt and the Dangers of Reading Alone
Next Post

Latter-day Saint
Exploring the Iconic Nature of the Book of...
Faith-Promoting Rumor 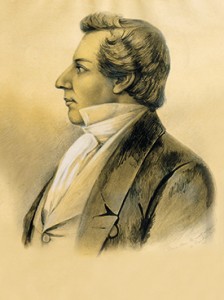