The gospel according to film

The gospel according to film June 13, 1998 Peter T. Chattaway 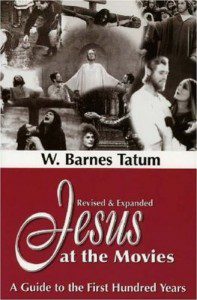 Jesus at the Movies: A Guide to the First Hundred Years
By W. Barnes Tatum
Polebridge Press, 245 pp., $18

John Dominic Crossan, co-founder of the Jesus Seminar and one of the wittiest historians working today, began his landmark work The Historical Jesus: The Life of a Mediterranean Jewish Peasant with the quip that historical Jesus scholarship had become something of a bad joke. The same could be said of that peculiar genre of films based on the life of Jesus, but for a very different reason.

Crossan was responding to the many competing and contradictory accounts of the life of Jesus that have been produced by modern historians. But moviegoers tend to be cynical for a very different reason. In their efforts to please as wide an audience as possible, filmmakers who tackle the gospels have tended to make Jesus a rather bland, anemic figure who has remained surprisingly constant and unchallenging over the years. Even revisionist films like The Last Temptation of Christ emphasize his weaknesses more than his strengths.

The prevailing attitude is reflected in a recent lyric by The Odds, in which the singer laments he is “kind of meatless / like actors who play Jesus / in movies of the week.”

But W. Barnes Tatum, professor of biblical studies at Greensboro College in North Carolina and a member of the Jesus Seminar himself, thinks the situation is more complex than that. In Jesus at the Movies: A Guide to the First Hundred Years, he charts the development (and, at times, the lack of development) of this genre, from the first French passion plays recorded on film in 1897 to Denys Arcand’s Jesus of Montreal in 1989, with some closing remarks on the script Paul Verhoeven has been developing with the Seminar’s assistance for the last few years.

Tatum’s is not the first book to provide a film-by-film account of the genre, but it just might be the first to place a higher emphasis on its historical component, rather than its theology. Tatum, as a scholar versed in redaction criticism, focuses on how these films have mixed and matched stories from the various gospels — and, at times, the secular histories of Flavius Josephus — to produce their own accounts of the life of Jesus.

Tatum notes that most films have tried to “harmonize” the four gospels. This is no easy task, since each gospel paints a relatively unique portrait of Jesus. In Mark, for example, Jesus tends to hide the fact that he is the Messiah, but in John, Jesus flaunts his divinity nearly every chance he gets. In Mark, the Last Supper happens to be a Passover seder, but in John, Jesus is killed before the Passover meal can take place.

Nevertheless, filmmakers over the years have cobbled together whatever mix of elements works best for them, from the first feature-length film in this genre, From the Manger to the Cross (1912), to Franco Zeffirelli’s TV mini-series Jesus of Nazareth (1977). This last film, Tatum argues, was the most successful of the “harmonized” films because it preserved the public secrecy of Jesus’ mission in Galilee but allowed him to become more bold once he entered Jerusalem in the film’s third and final act.

More recently, film-makers have tried to base their films on a single gospel each, thus more or less preserving the visions of the original gospel writers. Pier Paolo Pasolini led the way with The Gospel According to Saint Matthew (1964), a neorealist adaptation that is frequently cited as the genre’s masterpiece.

However, even here, there are compromises. Pasolini edited out most of the apocalyptic passages, in which Jesus predicted the destruction of the Jerusalem temple and, perhaps, the end of the world. And although Pasolini, a renowned Marxist, said he was attracted to Matthew’s gospel because it was “the most earthly” in its politics, Tatum notes that Jesus is killed in this film for purely religious reasons, simply because that’s the way Matthew records it. “Ironically,” Tatum writes, “Pasolini the Marxist has completely de-politicized the crucifixion.”

Tatum traces other threads through these films, including their uneven approach to anti-semitism. Silent-era stalwarts such as D.W. Griffith (Intolerance, 1916) and Cecil B. DeMille (The King of Kings, 1927) made a point of emphasizing the Jewishness of Jesus and his culture in their movies, but this theme was not picked up again until the 1970s. The “bathrobe epics” of the 1950s and 1960s gave one the impression that Jesus was just a good American boy, more of a pacifist than a prophet — and, if he was Jeffrey Hunter in King of Kings (1961), a.k.a. “I Was a Teenage Jesus”, he even remembered to shave his armpits before getting crucified.

There are a few gaps in Tatum’s book. He focuses almost exclusively on secular productions — a major exception being Jesus (1979), the Campus Crusade for Christ film based solely on Luke’s gospel — but he could have paid more attention to independent, church-funded efforts.

One such film, Day of Triumph (1954), was the first life-of-Jesus flick produced in America since the invention of talking pictures in 1927. Several more years would pass before the major studios tried anything that direct — most films at the time, such as Ben-Hur and Barabbas, told stories around Jesus but avoided the man himself as much as possible — and it has been available on video for quite some time. Surely it warrants more than a footnote.

Tatum could also have given more space to alternative films such as Monty Python’s Life of Brian (1979), which rates only a paragraph or two here. Brian, by subverting the genre’s artificial pieties and exposing the greed, selfishness and banality of Jesus’ followers, often strikes closer to the heart of Jesus’ message than the crowd-pleasing spectacles of DeMille and his ilk, and it deserves closer inspection.

Overall, though, Tatum displays a commendable grasp of his subject, both historically and cinematically, and his book offers a welcome invitation to look at these films from a fresh perspective.

— A version of this review first appeared in the Vancouver Sun.

June 23, 1998 Review: The Truman Show (dir. Peter Weir, 1998)
Recent Comments
1 Comment | Leave a Comment
Browse Our Archives
get the latest from
FilmChat
Sign up for our newsletter
POPULAR AT PATHEOS Entertainment
1