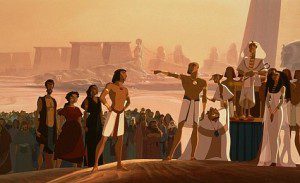 If you want to make an impression, it helps to have a prophet on your side. Jeffrey Katzenberg, the former Disney production chief who co-founded the DreamWorks studio with Steven Spielberg and David Geffen, wanted to prove that he could make animated films surpassing those of Disney in their technical prowess and artistic ambition. Spielberg suggested that he produce an animated remake of The Ten Commandments.

Thus was born The Prince of Egypt, an eye-popping extravaganza and a very impressive film, indeed. It features probably the best and most seamless integration of computer-generated images and hand-drawn animation to date, and it takes mainstream animated films one small but important step closer to mature storytelling.

True, the film does rely on the Broadway-style show tunes that have become de rigeur of late, but it is free of talking animals and cute sidekicks. Moreover, the central relationship is not between two dreamy lovers, but rather between two brothers torn apart by their respective destinies: Moses (the voice of Val Kilmer) and Rameses (Ralph Fiennes) are not jealous rivals for the throne but siblings who genuinely love each other. The film is at its most interesting and powerful when it explores their kinship.

In fact, Rameses turns out to be the film’s most tragic figure. At the beginning, his place on the throne is already assured, but he feels he cannot live up to the standards that have been set for him by his father, the Pharaoh Seti (Patrick Stewart). Moses, on the other hand, is a wild and reckless fellow who keeps getting his older brother into trouble.

When Moses learns the truth about his Hebrew childhood and accidentally kills an Egyptian, he flees the palace and leaves Rameses behind. When Moses returns some years later, Rameses — who has succeeded Seti as Pharaoh — is happy to see him at first, but he is bemused and distraught when Moses tells him to let the Israelites go. Rameses’ heart is hardened out of his need to live up to his tyrannical father’s expectations.

The film is full of clever, fantastic and dazzling setpieces, including a chaotic chariot race, a hieroglyphic nightmare sequence, a series of plagues culminating in the ghost that kills the firstborn, the parting of the Red Sea, and Moses’ mystical encounter with the burning bush, its ectoplasmic flames quietly transforming into green leaves as God promises to lead the Israelites to a land of milk and honey.

But as wonderful as all this activity is, one can’t help thinking there is little at stake in any of this beyond the activity itself. In a nutshell, The Prince of Egypt has no moral vision to communicate under all this sound and fury.

Like most cartoons, it expresses a universal yearning for freedom, but it doesn’t go beyond that to explore the responsibilities that prevent such freedom from being abused. The film ends at the Red Sea; there is no golden calf, no grumbling in the wilderness, and no giving of the law, apart from a single wordless shot of Moses carrying two stone tablets.

Say what you want about the tawdriness of past epics, but they were usually about something. The 1923 version of The Ten Commandments critiqued godless modernity and self-righteous fundamentalism; the 1956 remake positioned the Israelites at the beginning of a global battle for democracy. TV movies about Moses produced since then have gone on to explore some of the more complex dimensions of the Hebrew faith.

The Prince of Egypt, on the other hand, promotes a sort of generalized pop spirituality: hold on, have faith, just believe, no specifics. Katzenberg and his associates really just want to put on a show, to build a monument to their talents that will stand for years to come, like a pyramid or a sphinx. And, as far as that goes, they have succeeded. At least their workers get paid.

January 3, 1999 Moses movies have their own history
Recent Comments
0 | Leave a Comment
Browse Our Archives
get the latest from
FilmChat
Sign up for our newsletter
POPULAR AT PATHEOS Entertainment
1