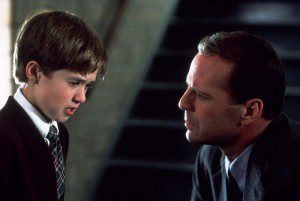 The sun still shines brightly in these last days of summer, but moviegoers are showing a pronounced taste for things that go bump in the night. As I write this, no less than three of the week’s 10 most popular films are ghost stories of one sort or another, each with its own spin on this time-worn genre.

The Haunting epitomizes the flawed big-studio Hollywood approach: throw lots of money at the screen, come up with all sorts of special effects on your computer, and hope the audience will be scared. But the effects actually undermine the suspense. The scariest movies are those which play on the audience’s own imaginations. Don’t show, and don’t tell—rather, suggest.

The Blair Witch Project, an independent film shot mostly on a home-video camera for about $30,000, is supposed to be the hip, Generation-X answer to the bigwigs. The film, which purports to be the footage left behind by three documentary filmmakers who went missing in the woods, caught the industry off-guard and is now expected to gross well over $100 million.

Much has been made of the film’s creepiness-enhancing subtlety, but I found it a hollow and unconvincing exercise in post-modern gimmickry. It neither showed nor told because there was nothing to show or tell. Most of the film is spent following the filmmakers as they wander aimlessly through the woods and, once in a while, throw shrill expletives at each other. It’s ultimately about little more than itself.

The scariest movie of the year turns out to be, interestingly enough, the most old-fashioned. The Sixth Sense doesn’t flaunt its wealth of effects, nor does it draw attention to its handheld trickery. It focuses, instead, on two characters and the almost believable fears they endure.

Indeed, it’s not until halfway through the film that the spooky stuff really begins. The first half is spent entirely on establishing the relationship between child psychologist Malcolm Crowe (Bruce Willis) and eight-year-old Cole Sear (Haley Joel Osment). Crowe sees in Cole a chance to redeem himself after he failed to help a former patient who showed similar symptoms and, as an adult, committed suicide. And, after an appropriate degree of trust has been built up between them, Cole opens up to Crowe and tells him his secret: he sees the souls of the dead.

I don’t know whether or to what degree director M. Night Shyamalan— whose last film, Wide Awake, was all about a Catholic schoolboy’s quest for God—actually believes in this sort of thing, but I think Christians can appreciate the film on its intended fictitious level.

It turns out most of the souls Cole encounters died prematurely, through executions, murders or suicides, and most of them still have unfinished business to deal with, though they don’t know how to do this. Cole, as one who can, for whatever reason, see them, is in a position to help them. And so the solution to Cole’s fears is, in the end, to stop fleeing these apparitions and to face them directly, even to listen to them.

There are several ways of handling fear in film and fiction. One is to use fear as a motivating force, like old end-times movies used to do ("Become a Christian or suffer the impending Tribulation!"). That, I submit, is an abuse of fear. Then there are stories, such as The Blair Witch Project, that dwell on fear for its own sake.

But there are positive ways of dealing with fear, too. In a somewhat different context, I John 4:18 tells us that perfect love drives out fear, and in a sense, that’s what happens in The Sixth Sense. Strengthened by the loving friendship between Crowe and Cole, the film takes Cole, and us, through the shadow of death, but it never strands us there.