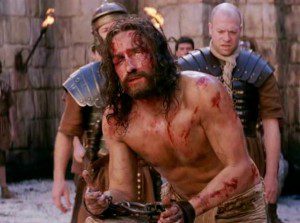 The Passion of The Christ may be the most artistically and commercially ambitious feature film about Jesus to come out of Hollywood since the 1960s. It is certainly the most devout, though at first it seems odd that Mel Gibson should be the one to produce, write, and direct a film about the Prince of Peace.

From the buddy-cop Lethal Weapon franchise to revisionist epics like The Patriot, Gibson has specialized in playing violent action heroes who take bloody revenge for the deaths of their wives, children, and girlfriends. In Braveheart, the 1995 film for which he won the Best Director Oscar, Gibson kept the fatal wounds inflicted on William Wallace and his wife just out of frame, to spare his audience the full brutality suffered by these heroes, but he reveled in the gory details with which Wallace executed his personal enemies.

In some ways, The Passion seems like a repudiation of much of his career to date: last year, Gibson, a traditionalist Catholic whose faith has surfaced in recent films like Signs and We Were Soldiers, told Fox News’s Bill O’Reilly he wanted to promote faith, hope, love, and especially forgiveness through this film. But The Passion also dwells, at considerable length, on the physical pain inflicted on Jesus. Has Gibson found a way to baptize, as it were, the sadistic or masochistic impulses of his other films? Is it possible he is indulging himself under the cover of religious piety?

At times it does seem so. Much has been made of The Passion’s adherence to Scripture, but in the rough cut shown to pastors and ministry leaders a month before the film’s release, it was clear that Gibson often goes beyond the text. Jesus, played with inspiring sincerity by James Caviezel (Frequency, The Thin Red Line), is not even out of Gethsemane yet when the Temple guards knock him about and hang him over a bridge by his chains, swelling shut his right eye. During scenes like this, you cannot help wondering whether Gibson, as the one who conceived and directed all this simulated torture, is more complicit in the horrors on display than he would like to admit.

Yet Gibson does exercise restraint at crucial moments. The flogging of Jesus may go on and on — and Jesus himself seems to encourage it when he pulls himself up and stands defiantly erect after the first round of beatings — but as several characters begin to find the violence so unbearable that they have to look away, so does Gibson: His camera follows Jesus’ mother Mary (Maia Morgenstern) as she retreats to another room, where she tries to cope with the cries of pain that she can still hear.

The film’s violence has been defended as a sign of its historical realism and biblical accuracy, but one of the more striking and impressive things about The Passion is just how much artistic license it takes with its source material. Gibson erroneously identifies Mary Magdalene (The Matrix Reloaded’s Monica Bellucci) with the woman caught in adultery, and his depiction of the Crucifixion owes more to medieval art than modern scholarship. Taking their cue from historians and archaeologists, nearly every film and miniseries produced since the 1970s — including Campus Crusade’s Jesus film and The Visual Bible’s recent Gospel of John — has depicted Jesus carrying only a crossbeam, being nailed through his wrists, being crucified naked, or some combination thereof. Gibson rejects all of these details, though he does, oddly, have the thieves carry crossbeams, while Jesus carries his full cross.

Gibson does embrace at least one welcome form of realism by emphasizing the Jewishness of Jesus and his followers. Caviezel has been made up to look more Semitic, and the first time we see Mary, as she senses that something terrible is about to happen to her son, she recites a line that comes straight from the Passover seder: “Why is this night different from every other night?”

In addition, when Simon of Cyrene (Jarreth Merz) — who becomes a significant supporting character deeply moved by his contact with Jesus — is forced to carry the cross, one of the soldiers practically spits the word Jew at him, thus stirring our sympathies for this oppressed people.

Details like these may not satisfy some of the film’s critics, who have said, with some justification, that it tends to divide the Jewish people into those who follow Christ and those who have him killed, with only the briefest of nods to those who might be neutral. And while the Roman soldiers may be unrelenting brutes, Gibson does cast a positive light on the Roman authorities, who chastise both the Jews and their own soldiers for their bloodlust. Pontius Pilate (Hristo Shopov), whose brutality and religious insensitivity are mentioned not only by secular historians but also in Luke’s gospel, is virtually let off the hook. He comes off as an innocent pawn who tries to do the right thing until the mob forces his hand.

The real villain in Gibson’s film, however, is no mere human. Satan (Rosalinda Celentano) is depicted here as a bald, pale, androgynous figure who lurks in the crowds and taunts Jesus at every turn — and it is in his bold, haunting, and audacious depiction of Satan that Gibson’s vision turns truly surreal.

In Gethsemane, Satan prods Jesus to doubt his Father and sends a snake slithering his way, which Jesus quickly crushes underfoot. Later, Satan mocks Jesus’ mother in a bizarre parody of Marian iconography that could have come from David Lynch; Satan is also absolutely ruthless with Judas (Luca Lionello), who is driven to suicide by seemingly demonic beasts and children. And — who knows — Satan may even be behind the crow that pecks out the eyes of the crucified thief who mocks Jesus.

But Gibson’s creativity is not limited to graphic depictions of evil; he also makes brilliant use of flashbacks to draw us into the mind of Christ.

Most movies about Jesus have protected his divinity by treating him objectively, as someone to be observed and talked about, but not as someone with whom we can identify. More recent productions like Martin Scorsese’s Last Temptation of Christ and the CBS miniseries Jesus have tried to humanize Jesus by treating him more subjectively — we see his dreams, we hear his thoughts in voiceover, and we get inside his head the same way we do with many other movie characters.

Where those films failed, partly because they demystified Jesus so thoroughly that he seemed to lose his divine authority, Gibson succeeds, by shooting much of the film from Jesus’ own point of view and by using flashbacks to create the impression that we are being drawn into the flow of Jesus’ own memories. When Jesus sees a man with carpentry tools, he thinks of his days as a carpenter; when he sees the street filled with people shouting at him, he thinks of his Triumphal Entry a few days before; when he sees Golgotha, he thinks of the sermon he gave on another mountain in which he told his followers to love their enemies.

By giving us the feeling of experiencing Jesus’ thoughts, and by making us privy to the prayers Jesus offers up as he submits to the will of his Father, The Passion draws us toward Christ’s full humanity like no film before.

For all that is praiseworthy in this film, it is still somewhat unsatisfying. Indeed, the flashback structure itself is part of the problem. In Scripture and in much of Christian tradition, the death of Christ is placed within the context of his life and Resurrection, but Gibson’s film reverses that by placing small bits of Jesus’ life within the overwhelming context of his death. As full of faith as The Passion is, it never gets beyond its raw and prolonged depiction of human and demonic cruelty; after vividly depicting the suffering and grief and despair of Jesus’ followers for two hours, the film forgets all about them, while reducing the Resurrection to a couple of special effects tacked on to the end.

Watching The Passion is like experiencing a woman’s labor pains — but never witnessing the joy that makes the pain worth it all.

1. Many say the film might be anti-Semitic. Which scenes might be especially disturbing to a Jewish viewer, and why? How does the film address the Jewishness of Jesus and his followers?

4. Jesus tells Peter that those who live by the sword will die by the sword. Is it always wrong to fight back? Can you believe in forgiveness and still enjoy movies about revenge, including earlier Mel Gibson movies like Braveheart and The Patriot? How?

The film is rated R for its graphic violence. This is not a film for children, and parents should probably see it first even before taking teens. Jesus is beaten by the Temple guards while leaving Gethsemane, and his eye is swollen shut for most of the rest of the film. The scourging sequence — in which sadistic Roman soldiers first strike Jesus with canes, then rip out chunks of his flesh with their cat-o’-nine-tails — is especially long and brutal, and very difficult to watch. The soldiers also flog Jesus and Simon of Cyrene repeatedly as they carry the cross to Golgotha. Satan and a number of demons make several grotesque appearances, and a crow pecks out the eye of one of the thieves crucified next to Jesus.

— A version of this review was first published in Christianity Today.

March 1, 2004 Commentary: Evil, violence and The Passion of the Christ
Recent Comments
0 | Leave a Comment
"What a strange article. Using movies as your basis to defend that Lazarus was murdered ..."
Mark Ross DeFazio The death, resurrection, and second death ..."
"Another with Ethiopian eunuch and Philip https://archive.org/details..."
Jason McKahan Watch: Philip is the original vanishing ..."
"I found Hanky Panky a pretty cool 80s movie when I first saw it on ..."
UniblabBR Sidney Poitier marathon: Hanky Panky (1982) ..."
"In 1972, yes. The movie was made in 1956 but the ratings system didn't exist ..."
Peter T Chattaway One of the reasons I do ..."
Browse Our Archives
get the latest from
FilmChat
Sign up for our newsletter
POPULAR AT PATHEOS Entertainment
1