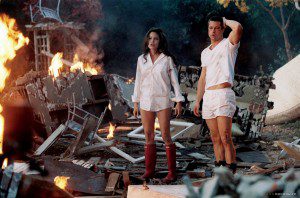 First, for the handful of obsessive film buffs out there who never read the tabloids, Mr. & Mrs. Smith has nothing to do with the 1940s screwball comedy of that name directed by Alfred Hitchcock. Instead, it is a curious hybrid of action movie and domestic comedy that stars Brad Pitt and Angelina Jolie as professional assassins who are married to each other but have kept their jobs secret from one another. Each spouse has all sorts of gadgets and weapons hidden around the house, and each assumes the other has a regular, boring job. And perhaps, in trying to live up to their suburban disguise, they have let things become too boring.

The film begins with a nicely understated sequence in which the Smiths attend a counseling session with an offscreen marriage therapist, who asks how long they have been together. “Five years,” says John (Pitt). “Six,” says Jane (Jolie), with the sort of barely suppressed irritation that comes from bottling things up for too long. “Five or six,” says John, in a way that indicates he knows his wife won’t accept such a noncommittal compromise.

At this point, moviegoers may recall that Pitt himself saw his marriage (to Jennifer Aniston) come to an end after five or six years together while he was making this movie, and that there has been much media speculation about the reasons for this. Suffice it to say that such gossip has no place here; for me, at least, it was quite easy to forget about all that, once the story gets going. Indeed, the only other time I found myself thinking about the movie stars’ real-life personae, it was during a scene in which the Smiths attend a neighbor’s party, and one of the women hands a baby over to Jane, leaving her to look rather uncomfortable as she holds the child at an awkward arm’s length. The ironic humor here, of course, comes from the fact that Jolie’s fondness for children is a huge part of her offscreen image.

But eventually the spy stuff must take over. John and Jane are each given assignments to take out a certain individual, and they unwittingly sabotage each other’s plans, but without immediately revealing their identities to each other. When they report their failures to their bosses, each of them is given 48 hours to figure out who got in the way, and to get rid of that person. And it isn’t long before they discover that they’ve both been sleeping with the enemy.

And then the fireworks really begin. Mr. & Mrs. Smith is a little like a cross between True Lies, but without the misogyny (this time, husband and wife are equally smart, equally strong, equally violent), and The War of the Roses. But only a little. You could also say the film represents an effort by director Doug Liman to pair the cozy relationship humor of his earlier, smaller hit Swingers (he even brings back Vince Vaughn as a sexist bachelor) with the action-packed thrills of his later, bigger hit The Bourne Identity. And like a lot of marriages, this combination hits a few rough patches, but it hangs together in the end.

Much of the credit goes to Pitt and Jolie, who are both quite charismatic and have proved their talents in a range of genres, which makes them perfect for a genre-blending film such as this one. The flashback showing how the Smiths first meet is particularly charming; they are both in Bogota, Colombia when the local militia starts rounding up tourists who are traveling by themselves, so they use each other as cover, and once they are alone together, they find they have a special chemistry. The next morning, Jane wakes up to find that John is gone, but before she can mourn his absence, he shows up with her breakfast — and he says he had to prepare it himself because the hotel staff have all “fled.”

But then we come back to the present, in which the Smiths confirm their suspicions about each other over an amusingly suspenseful dinner, and then — over the course of several confrontations, some public, some private — get down to the business of shooting, punching, and kicking each other, while rigging the odd room or two to explode. But Liman never takes the violence so seriously that it gets in the way of the humor; he is pretty obviously just using an exaggerated form of an already exaggerated genre to make light of humdrum marital difficulties, and seen in that light, it’s not that bad. A lot of humor is rooted in the ability to give us a sense of proportion about our lives; in real life, some people throw dishes at their spouses, but in this movie, people blow things up, and it’s all so over-the-top that you can’t really take it any more seriously than, say, The Incredibles, which also mocked suburban life through the use of explosive spy-movie clichés.

One problematic issue that the film never properly addresses is who, exactly, the Smiths work for, or who, exactly, the Smiths are fighting when they discover they have a common enemy. With, say, a James Bond film, it isn’t too hard to suspend our moral qualms and accept that governments give certain agents the permission — even the duty — to kill people who work for other governments; that sort of thing is just set dressing for a traditional battle between good guys and bad guys. But Mr. & Mrs. Smith enters into morally murkier territory, especially in its third act when the Smiths must team up against their mutual foe, and it doesn’t allow us to bracket things off so easily. It also leaves some key plot threads unresolved, even as it tries to give us some sort of happy ending.

It is also not clear what some of the film’s suburban symbolism is intended to convey. A chase scene involving a mini-van and some sleek cars driven by the enemy agents could be a celebration of suburban spirit, but a climactic shoot-out inside a discount department store is open to more ambivalent readings; are the enemies invading a suburban paradise, which the Smiths heroically defend, or is the destruction of that store intended as some sort of critique of middle-class consumerism, with its ideas about what makes the “perfect” home?

Things like these keep Mr. & Mrs. Smith from being the very good film it could have been. Still, Pitt and Jolie have chemistry to burn, and the film hits more often than it misses. Christian moviegoers might also get a kick out of the way Christian pop culture is used to signify the dull, middle-class life. A cover of Amy Grant’s ‘Baby Baby’ can be heard on the soundtrack when the Smiths attend their neighbors’ party, and Chris Weitz (who, together with his brother Paul, co-directed About a Boy, co-wrote Antz, and co-starred in Chuck & Buck) plays a neighbor from whom the Smiths steal a couple of “Jesus Rocks!” jackets. Because, of course, every suburban paradise must have its Ned Flanders.

2. How should married people deal with tension or aggression in their relationships? Is it ever healthy to release any of that aggression, to argue or even fight? If so, when and how?

Mr. & Mrs. Smith is rated PG-13 for sequences of violence, intense action, sexual content and brief strong language. The Smiths have sex right after they meet (it’s not explicit), but they later marry. The Smiths kill people as part of their job — which may or may not have government sanction — and when they discover that they are both assassins working for rival firms, they kick, punch, shoot at each other and plant bombs intended for each other, but it’s all intended as a send-up of marital difficulties and spy-movie conventions. We also see quite a bit of Jolie in some scenes (no nudity, but lots of legs and cleavage), including one where she’s wearing a dominatrix outfit.

June 10, 2005 Passion writers speak!
Recent Comments
0 | Leave a Comment
"I have neither noticed that much. I recenty read a leadership book inspired from Cyrus ..."
Hamid Mortazavi Cyrus the Great — a Persian ..."
""AD" stands for "Anno Domini", a Latin expression meaning "In the Year of Our Lord".So ..."
Peter T Chattaway The Chosen — season one, episode ..."
"Why does it say at the start of episode 3 that it takes place 26 ..."
Desiree Chamberlain The Chosen — season one, episode ..."
"What about Hellboy, The Grudge, Ghoulies, and Anaconda?"
45th Spiderbob Group VGCP When R-rated franchises go PG-13 …
Browse Our Archives
get the latest updates from
FilmChat
and the Patheos
Entertainment
Channel
POPULAR AT PATHEOS Entertainment
1

Entertainment
Box office: Moana sails to the top of...
FilmChat