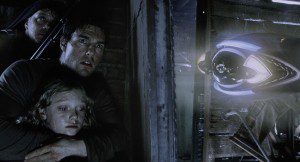 Has it really been two centuries since H.G. Wells wrote The War of the Worlds? Well, no, not quite, but he did write it in the late 19th century, and in it, he criticized the European and especially British imperialism of his time; just as the world’s colonial superpowers had wiped out the dodo, the bison, the aboriginal tribes of Tasmania, and others, so too they would now feel what it was like to live under the brutal domination of an advanced civilization, albeit one from Mars.

But if the novel encouraged self-reflection and invited its readers to consider how they had mistreated the world, the story’s film and radio dramatizations have tended to confirm their audiences’ fear and suspicion of the other. Orson Welles’s 1938 radio play, which caused panic when some listeners mistook it for a genuine news broadcast, was produced less than a year before the Nazis launched the Second World War; George Pal’s 1953 film came out during the Cold War, and presented Americans as the heroic, God-fearing victims of an unwarranted and presumably Soviet-style attack; and now, in the first decade of the 21st century, Steven Spielberg’s film presents the alien invaders as stand-ins for the terrorists who attacked on September 11, 2001.

This time, the aliens do not come from Mars but from some other, unspecified world; and it turns out their fighting machines have been buried under the surface of the Earth, waiting for pilots to come and use them, for possibly millions of years — the alien equivalent of sleeper cells, perhaps. The pilots come down in lightning storms that send out an electromagnetic pulse that knocks out all the local machines; and when their machines rise up from the ground, they proceed to shatter the buildings and evaporate the people. The survivors are coated in the dust of their fellow citizens, an image that recalls photos of the people who emerged from the cloud of debris after the World Trade Center towers fell.

One of these survivors, a dockworker named Ray Ferrier (Tom Cruise), is a divorced father of two who happens to be looking after the kids for the weekend when the aliens hit. (One of his children is supposed to be working on a school paper on the French occupation of Algeria; this is the film’s only explicit nod to the novel’s anti-colonialist subtext, and, tellingly, it directs the criticism somewhere else.) Like many other Tom Cruise characters, Ray is glib and irresponsible when we first meet him — he jokes about his troubles with women, his vintage Mustang skids loudly as it turns through the intersection near his house, and he shows up half-an-hour late for a meeting with his ex-wife (Miranda Otto), who is dropping off their teenaged son Robbie (Justin Chatwin) and ten-year-old daughter Rachel (Dakota Fanning) so that she and her new husband can visit her parents on their own — but circumstances force him to become more focused and purposeful by the story’s end.

Ray’s first instinct is to steal a mini-van that a local mechanic fixed with his help, and to take the children back to their home. But the house is deserted, and — shades of the plane that fell in the Rockaway neighborhood of Queens, two months after the terrorist attacks — it is soon destroyed by a falling airplane. He then heads for his ex-wife’s parents’ home in Boston, but he encounters a series of obstacles along the way. And to make matters worse, the children don’t respond very well to his feeble assertions of authority over them.

Those expecting a conventional war movie, whether of the fantasy Star Wars variety or the realistic Saving Private Ryan variety, may be in for a shock. Spielberg shows little interest in the military, except to show how even it is powerless against the alien attack; and as the panicked humans begin to fight amongst themselves, while the aliens start harvesting humans for their blood, the film takes on the bleaker and more apocalyptic tones of A.I. Artificial Intelligence and even Schindler’s List. As Ogilvy (Tim Robbins), a delusional survivalist with whom Ray and his daughter hide for a spell, puts it, “This is not a war, any more than there’s a war between men and maggots. This is an extermination.”

From a technical standpoint, Spielberg is one of the slickest filmmakers around, and he has a knack for making special effects look easy and natural; he also has a healthier appreciation for the human and the absurd than many other directors in this genre. (Take George Lucas — please!) In one scene in War of the Worlds, the camera starts outside Ray’s van as it speeds down the highway, and then it passes through the inside, before coming back outside and lifting up into the sky as the van heads off into the distance. The shot must have been a doozy to plan and execute, but the camera moves with ease, and throughout it, Spielberg keeps his focus on the relationship between Ray and his children. He also leavens the sheer grimness of the story with small, believable doses of humor; when Robbie asks if the attack came from terrorists, Ray says, “It came from somewhere else,” and Robbie replies, to his father’s exasperation, “You mean, like, Europe?”

Still, however warm Spielberg may feel toward individual persons, War of the Worlds just may represent the bleakest view of humanity as a whole that has ever come through in one of his films. In one of the more disturbing scenes, a mob surrounds Ray’s mini-van as individuals try to get inside; windows are smashed, guns are drawn, and lives are taken. Ray also comes to the point where he feels he must murder an insane man in order to shut him up before he draws unwanted attention. In Wells’s book, this homicide is almost accidental, a crime of passion that our protagonist tries not to feel too guilty about because he did not plan it beforehand; but Ray’s action is premeditated, and you wonder if it would seem as justified if he were protecting only himself and not his little girl as well.

As with so many other Spielberg films, it is impossible to watch War of the Worlds without thinking of other movies. It plays like a fusion of 1990s disaster flicks — the alien invasions of Independence Day, the dark clouds and ominous winds of Twister, the sinking vessel and panicked passengers of Titanic — and those foreboding nuclear-war films that were all the rage in the 1980s. A scene in which an alien probe searches a basement for human prey perfectly mirrors a scene in Spielberg and Cruise’s earlier collaboration, Minority Report. The cages in which the humans are stored as food under the heads of the “tripods” recall similar devices in A.I. Artificial Intelligence. And the giant sphincter that sucks human victims out of those cages brings to mind, uh, Ivan Reitman’s Evolution.

Disaster movies and apocalyptic movies usually invite some sort of religious reflection, and Spielberg has not been shy about exploring faith issues in his films; Minority Report even cast Colin Farrell as an alumnus of Fuller Theological Seminary! But War of the Worlds is a more solidly secular affair. In Wells’s novel, religion is depicted mainly as a force that drives people insane — the man that the protagonist kills is, in fact, a clergyman — while Pal’s 1953 film reflected the heightened religiosity of its time. Spielberg, working from a script by Josh Friedman (Chain Reaction) and David Koepp (Jurassic Park, Spider-Man), avoids both the negative and positive extremes — the man Ray considers killing is no man of the cloth this time — but in doing so, he leaves an unfilled void at the heart of his movie.

A church is one of the first buildings to be destroyed, and, given the chaos that follows, this may signify how society is lost without faith; then again, given how none of the characters ever consider the possible religious dimensions of their plight, it may also signify that religion is a luxury that society cannot afford when it must struggle simply to survive. Like disasters in real life, the film hits you in the gut with a vision of catastrophe, and leaves you to sort out what it all means. It’s a daring approach for a would-be summer blockbuster — so daring it’s almost admirable — but some viewers might want a little more guidance.

1. How does this film depict technology and nature? When Rachel has a splinter, she says her body will push it out “when it’s ready.” How does this relate to the alien invasion? What does this say about how we should deal with suffering?

2. Do you think this film has any resonance to current world events? If so, in what way?

3. What do you think of the film’s depiction of religion? What would you have done differently? What do you make of the link between God and the evolutionary process of natural selection (“by the toll of a billion deaths”) in the film’s closing line?

4. What does the film say about authority? How does it portray soldiers, police officers, the media, and parents? What about the film’s portrayal of everyday people? Do they need authority? Can they get by on their own? How often do good intentions lead to bad results?

5. What do you make of the film’s depiction of violence? Is Ray justified in trying to kill someone to save his family, or even just to save himself? What would you do in his place?

War of the Worlds is rated PG-13 for frightening sequences of sci-fi violence and disturbing images. There is also some profanity, including several uses of God’s name in vain. There are lots of deaths and dead bodies, and there is lots of wreckage. It’s too scary for young children — probably darker and more intense than Star Wars: Episode III: Revenge of the Sith.

— A version of this review was first published at Christianity Today Movies. I posted some extra thoughts here.

June 29, 2005 War of the Worlds -- the review is up!
Recent Comments
0 | Leave a Comment
"This was a refreshing read. I'm an average fan of Hellboy but I'm also a ..."
Andrew Mathews Doug Jones on Hellboy and Christianity.
"Great interview! One thing I've wondered since watching Season 1 is why they didn't include ..."
A.J. Cattapan Interview: The Chosen writer-director Dallas Jenkins ..."
"Earth actually does exist in the Dark City universe. Early in the film when John ..."
Edward Clint Dark City and the ambiguous ending.
"I don't always agree with your opinions, but your reviews are never less than interesting ..."
Laura-Lee Rahn The top-grossing Italian movie of 2019: ..."
Browse Our Archives
Follow Us!