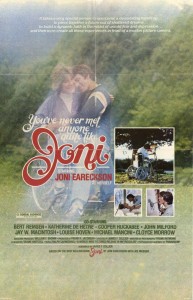 The Hiding Place (1975)
One of the best and most ambitious Christian films ever made, this moving, realistic, and superbly-acted historical epic — based on Corrie Ten Boom’s account of how she was sent to a concentration camp with her sister for hiding Jews from the Nazis — doesn’t flinch from some of the more graphic and disturbing aspects of the Holocaust. Yes, Minister’s Nigel Hawthorne has a bit part as a cowardly pastor.

Joni (1979)
Filled with subtle visuals and silences, this just may be the most “cinematic” of World Wide’s films. Based on Joni Eareckson’s popular account of how she found a deeper faith after a diving accident left her a quadriplegic, the film stars Eareckson as herself — and she proves to be a more than capable actress as she recreates some of the most traumatic experiences in her life. Ghostbusters’ Ernie Hudson plays one of the hospital orderlies.

For Pete’s Sake (1968)
What if a crusade took place at the beginning of the film, and we followed a newly saved family as it tried to put its faith into practice? Livened by self-deprecating humor — look for the scene in which a rain shower interrupts one of Graham’s sermons! — this film allows Christians to laugh at their own foibles even as they spread the gospel. Teri Garr plays one of the biker chicks who hangs out at the dad’s garage.

Caught (1987)
World Wide’s only PG-13 film follows two men: an American who came to the Netherlands looking for his birth father, and got involved with drugs and prostitution instead; and an Indian missionary who, having come to Amsterdam for an international conference hosted by Graham, reaches out to the American. Jill Ireland plays the American’s mother, and Jesus Christ Superstar’s Ted Neeley provides the soundtrack.

Something to Sing About (2000)
An African-American ex-con is taken in by a kind elderly woman (The Ladykillers’ Irma P. Hall) and discovers that his voice is just what the church choir needed; meanwhile, his best friend tries to get him involved in the world of drug dealing. Good music and nice touches of humor; plus this may be the only Billy Graham movie in which a character comes to Christ after watching another Billy Graham movie!

August 23, 2005
Billy Graham Goes to the Movies
Next Post

August 23, 2005 Charlie Chaplin -- a lost, um, not-treasure
Recent Comments
0 | Leave a Comment
Browse Our Archives
get the latest updates from
FilmChat
and the Patheos
Entertainment
Channel
POPULAR AT PATHEOS Entertainment
1