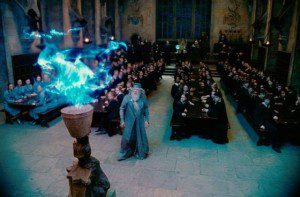 Things get more emotional, and more intense, in Harry Potter and the Goblet of Fire. This is the fourth and middle installment in J.K. Rowling’s seven-part series, and it is, in a sense, the fulcrum on which the entire saga rests. Each of the previous stories concerned a mystery that took place over the course of an entire school year, but despite a few loose threads here or there, the mysteries were basically resolved in the end. This new story starts off as just another adventure, more or less, but by the end, the situation faced by its protagonists has become much darker, and much more dire. If the previous films were like the lull before World War II, when Hitler built his army and everyone hoped nothing would come of it and life could go on as before, this film marks the invasion of Poland, so to speak. There is tragedy, and death, and we know things will get only worse.

However, there is also humor, and life. Harry Potter (Daniel Radcliffe) is 14 years old now, and his passage into adolescence is believably awkward and full of surprises. Goblet of Fire is directed by Mike Newell — the first British director to work on this series — and it is somewhat reminiscent of his best-known movie, Four Weddings and a Funeral. While the central romance in that film was pretty blah, the supporting cast, and the engaging circle of friends that surrounded the Hugh Grant character, frequently stole the show. Something similar happens here; while Harry’s trials remain front and center, with mixed results, most of his schoolmates get chances to shine that ought to keep their various fan clubs happy. In a way, these characters are more entertaining than the actual story in which they live.

Speaking of the story, the book Goblet of Fire is nearly as long as the three previous books combined, but the film version had to be the same length as the others. (In fact, Chamber of Secrets, at 161 minutes, remains the longest of the bunch.) That means Steven Kloves, who wrote all four screenplays, had to hack out some major subplots — such as the one in which Harry’s brainy, principled friend Hermione Granger (Emma Watson) begins a house-elf liberation movement — while cutting others down so severely they end up going nowhere, leading you to wonder if they should have been dropped, too. Chief among these is the one involving Rita Skeeter (Miranda Richardson), a gossip columnist who spreads false rumors about Harry and his friends in the wizarding world’s major newspaper, The Daily Prophet.

When we first see Harry, he is attending the Quidditch World Cup with Hermione and the Weasley family, including his friend Ron (Rupert Grint). The festivities are interrupted, however, by the Death Eaters — a cult of cloaked and hooded villains who once followed the Dark Lord Voldemort, and who continue to make mischief in his name. Harry escapes, with help from the Weasleys, and makes his way to Hogwarts in time for the beginning of the new school year. And there, he learns that Hogwarts has been chosen to host the Tri-Wizard Tournament, an international competition in which one young British wizard will compete against champions from wizarding schools in France and Eastern Europe.

Harry is, technically, too young to compete in the contest. But the Goblet of Fire, a magical device that was supposed to accept entries only from students over 17, produces Harry’s name anyway — after selecting Cedric Diggory (Robert Pattinson) to be the school’s official representative. Obviously someone has tampered with the magic, but who? Harry’s classmates assume that he did it, and Harry finds himself ostracized. But however his name got in there, the tournament’s magic rules are binding, and Harry is obliged to compete — even though it means there will now be four wizards, not three, in the competition.

The tournament itself consists of three tests — each of which, involving dragons, merpeople, and a labyrinth that ensnares its visitors, is a potentially life-threatening experience — and the story moves through them at a satisfying pace. Less straightforward are the social dynamics with which Harry must contend. Ron, improbably, is one of the schoolmates who believes Harry cheated his way into the tournament to win glory for himself; and by the time the two boys are on speaking terms again, there is yet another rift, this time between Ron and Hermione, over who should go with whom to the Yule Ball. Professor McGonagall (Maggie Smith) describes this event, delightfully, as “an evening of well-mannered frivolity” — but it doesn’t seem frivolous to Harry or Ron, as they must wrestle with their feelings or overcome the butterflies in their stomachs before asking one of the girls to the dance!

Newell is at his best with this sort of material, and he fills the character-driven scenes with many amusing asides, from the way Ron’s older brothers Fred and George (James and Oliver Phelps) joke around to the way stern Professor Snape (Alan Rickman) whaps Ron and Harry on the head to get them to shush during an exam. Incidentally, as our characters have grown up, so has their sense of humor, which relies less on gross-out gags and more on gags that aim below the belt. At one point, the bully Draco Malfoy (Tom Felton) is turned into a ferret and dropped down another bully’s pants; at another, Harry keeps, uh, certain things hidden when the ghost Moaning Myrtle (Shirley Henderson) interrupts his bath.

But there are also moments of quiet, tender sorrow and joy, especially where the once-hapless Neville Longbottom (Matthew Lewis) is concerned. And, at times, director Newell strikes just the right note of absurdity in moments of utter, ominous seriousness, such as when Harry’s name is produced by the Goblet and “Mad-Eye” Moody (Brendan Gleeson), the new Defense Against the Dark Arts teacher, rolls his artificial eyeball over to look at the boy.

However — and those who have not read the book may want to skip this paragraph — the film completely fumbles the ball at the most crucial moment, when Harry is caught by servants of the Dark Lord Voldemort (Ralph Fiennes) and witnesses the macabre ritual that brings He-Who-Must-Not-Be-Named back to full embodied life for the first time in over a dozen years. This is supposed to be the moment when Voldemort, who has snake-like nostril slits where his nose ought to be, steps out of the shadows and confronts us with his evil. But instead, he comes across as nothing but a whiner, a bald man in a cape with a bad nose job. When the Emperor made his first appearance in Return of the Jedi, I could believe that Darth Vader would voluntarily submit to him; but I find it difficult to imagine that someone as proud as, say, Malfoy’s father (Jason Isaacs) would submit to this guy. Will children find this sequence scary? I’d like to think so, but I doubt anyone else will.

The film unfolds so quickly, you almost don’t have time to notice how passive Harry is — he is constantly reacting to things or letting events drive him, rather than acting and driving them himself — or how his friends continue to break the rules whenever it suits their purpose. What you do notice are the fantastic visuals — note how the tents at the quidditch match are bigger on the inside than the outside, or the way the dragon pursues Harry by clambering over the roof of Hogwarts — and the amusing characters. Alas, in its climactic moments, Goblet of Fire fails to lay the groundwork that the next films so badly need.

1. What do you make of Harry’s behavior in this story? Is he active, or passive? Is he driving the story, or is the story driving him? Note how he enters the tournament, how his friends react, how he learns what it takes to succeed in the tournament, how he handles the task of asking someone to the Yule Ball, and ultimately how he faces Voldemort.

2. At one point, Harry is awarded for his “outstanding moral fiber.” Do you agree with this prize? How much moral fiber does Harry show? How about his friends?

3. What is the connection between morality and “the rules”? Note how Hagrid reveals the nature of the first test to Harry and the headmistress of the French school, even though it’s against the rules. Should Harry have spread the secret to Cedric? Should he have let the authorities know that the secrecy of the test had been compromised? Is it perhaps “fair” that Harry should cheat, since he was forced into the tournament against his will?

4. Dumbledore says, “Curiosity is not a sin, Harry, but you should exercise caution.” Does Harry learn caution? Is there any place in the film where he exercises it? Do you think, perhaps, that Dumbledore or the other good characters are being too cautious?

5. What do you make of the fact that the magic which most resembles occultism in the real world — as opposed to the fantasy magic of flying broomsticks, etc. — is practiced by Voldemort and his cult of so-called Death Eaters, i.e. by the bad guys? Does the magic practiced by the good guys ever resemble real-world occult rituals?

Harry Potter and the Goblet of Fire is rated PG-13 for sequences of fantasy violence and frightening images. (All of the previous films were PG.) These include a snake crawling through a skull, Death Eaters marching through some campgrounds, a dragon chasing Harry around the school grounds, an attack of underwater creatures, and a labyrinth, the hedges of which close in on the students walking through it. The story climaxes in a dark ritual, in which a person cuts off his hand and draws someone’s blood to bring the evil Dark Lord Voldemort back to life. A few people are killed. There is also some dubious language, mostly of the “bloody hell” variety. There is also a hint of naughtiness when Harry takes a bath and a ghost visits him, with intentions to peek under the water.

November 18, 2005 Paradise Now -- the review's up!
Recent Comments
0 | Leave a Comment
Browse Our Archives
get the latest updates from
FilmChat
and the Patheos
Entertainment
Channel
POPULAR AT PATHEOS Entertainment
1