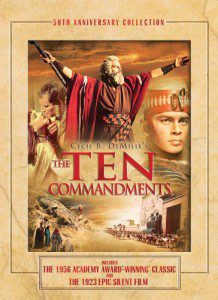 From its annual television broadcasts to its frequent repackaging for home video, The Ten Commandments is not only one of the biggest hit movies of all time, it is also one of the most enduring. But what many people don’t know is that this famous movie, like a number of other 1950s Bible epics, was actually a remake of a 1920s silent film.

A new DVD aims to fill that gap. Marking the remake’s 50th anniversary, both films have been combined in a three-disc package. The first two discs are identical to a “special edition” of the 1956 version that was released two years ago; but the third disc marks the first time that the 1923 version has ever been released on DVD.

Both movies were directed by Cecil B. DeMille, who, when signing autographs, reportedly told his fans, “If you break the Ten Commandments, they will break you.” DeMille believed that the Ten Commandments embodied a universal set of moral principles that people disobeyed at their peril, and both films transmit this belief in ways that reflect their times.

The 1923 film is divided into two parts: a prologue which tells the story of the Exodus and the golden calf, and a morality play set in the “modern” era. The prologue is basically a spectactularly illustrated Sunday School lesson, with impressive special effects and some of the earliest Technicolor footage on record; plus, at the time, it capitalized on the public’s thirst for all things Egyptian, following the recent discovery of King Tut’s tomb.

The second part of the film concerns a Christian woman and her two sons, one of whom is tired of her Bible stories; he says all that stuff died with Queen Victoria, so he vows to break all ten commandments — and in the end, he suffers the consequences. DeMille critiques modern atheism, but he also questions the mother’s harsh religious fundamentalism; it is her other son, a carpenter, who strikes a better balance between truth and love.

The 1956 film is set entirely in the ancient world, but it still addressed contemporary issues. In a personal introduction to the film, DeMille alludes to the Cold War and says the theme of his film is the ongoing battle between freedom and dictatorship. Moses’ relationship with Jethro is also tweaked in a way that comments on Arab-Israeli relations at that time.

This time, DeMille communicates the universality of the Ten Commandments by showing how Moses (Charlton Heston) intuitively obeys them long before God spells them out from a pillar of fire. Raised as an Egyptian prince, Moses is a just and virtuous leader who voluntarily gives the slaves under his command a day of rest; but Rameses (Yul Brynner), his rival for the throne, is a selfish tyrant who brings ruin down on his nation.

Since then, there have been a few other movies and TV shows about Moses and the Exodus, but it wasn’t until this year that Hallmark Entertainment and the ABC network produced another film bearing the title The Ten Commandments. 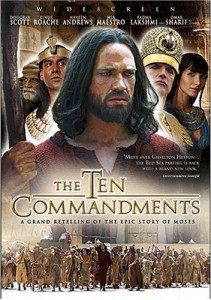 Broadcast in mid-April, the two-part mini-series fleshes out some of the biblical material that DeMille left out, such as the Hebrews’ war against the Amalekites; and while this movie depicts the miracles through which God delivered the Israelites, it also emphasizes the sorrow that Moses (Dougray Scott) feels over the deaths of his Egyptian friends and the violence through which the Israelites must defend and discipline themselves.

This time, the necessity of the moral law is communicated through characters who fail to live up to it. One of Moses’ friends commits adultery, then murder, and then he lies to cover up his sin — and once he is exposed, he has to be punished, even though Moses is very aware of his own guilt in some of these areas. (He did kill an Egyptian, after all.)

It’s not exactly the most inspiring version of the story so far. But in its own way, the mini-series affirms DeMille’s message, that the commandments are not lightly dismissed.

— A version of this article first appeared in ChristianCurrent.

May 2, 2006 Cory Edwards -- the interview's up!
Recent Comments
1 Comment | Leave a Comment
Browse Our Archives
get the latest from
FilmChat
Sign up for our newsletter
POPULAR AT PATHEOS Entertainment
1