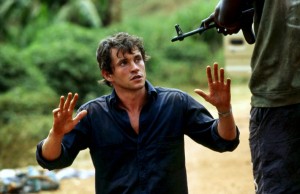 SHOOTING DOGS would make an interesting double-bill with Hotel Rwanda.

Both films concern the genocide of 1994 — and the shock that those living in that country felt when the international community failed to do much more than evacuate those with white skin.

But whereas the latter film was largely about Africans who survived the massacre, thanks to a cunning hotel manager who knew how to push the buttons of the social elites, the new film concerns a Catholic priest (John Hurt) and a teacher at his school (Hugh Dancy), who can do little more than watch as the world gives up on their friends and neighbours.

They can pray, too, of course — so the priest makes a point of serving mass at the usual times, as though nothing outside the chapel walls had changed.

The film has been criticized for telling what should be an African story through the eyes of noble Europeans, but director Michael Caton-Jones (Rob Roy) fleshes out some key Rwandan characters, especially a bright Tutsi pupil named Marie (Claire-Hope Ashitey).

This film’s portrayal of the reporters and United Nations officers is pretty compelling; however, Hurt’s priest and his theology are pretty thinly drawn — which hinders what could have been a powerful statement about God’s presence in the midst of suffering.

But it’s still worth a look. And stay for the credits, which reveal that a number of the film’s crew are survivors of the genocide themselves — some of whom lost entire families.

— A version of this review was first published by BC Christian News.

July 28, 2006 The Scoop Bully -- the reviews are up!
Recent Comments
0 | Leave a Comment
"Whoever wrote this article called Mary a virgin. She was only a virgin till after ..."
Ronnette Harvey The latest attempt to film all ..."
"In addition to this explanation of why "Paul says he can’t tell the Roman Christians ..."
PaulDT Paul, Apostle of Christ: a scene ..."
"Outstanding outline and identification of references and sources as well as background. Thank you so ..."
PaulDT Paul, Apostle of Christ: a scene ..."
"" So now, basically, the Magi are just a substitute for Santa Claus." <- Well... ..."
The 3 Wise Men — not ..."
Browse Our Archives
Follow Us!