Review: Harry Potter and the Order of the Phoenix (dir. David Yates, 2007) 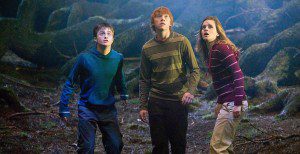 THERE is a lot that could be said about Harry Potter and the Order of the Phoenix.

It is the longest of the books in J.K. Rowling’s phenomenally popular series, yet it is also the shortest of the five movies that have come out so far.

The book, which came out in 2003, was the first to be written after the movies went into production — and it is tempting to wonder whether Rowling’s description of her characters was influenced in any way by the actors assigned to the roles.

The book was also the first to come out after the 9/11 terrorist attacks, which lent a heavy subtext to the plot of the novel — which concerns a cultural and political establishment determined to do anything but deal with the evildoers in its midst.

But if there is one thing Harry Potter fans remember about the book, it is that it was something of a disappointment. Despite its length, and despite the fact that a significant character dies, not a lot seems to have happened by the end. And this is a problem the movie version never really overcomes.

The previous film, Harry Potter and the Goblet of Fire, ended on a dark and serious note — with the return of Voldemort (Ralph Fiennes) and the murder of a student by his hands. These actions were witnessed only by Voldemort’s followers, known as the Death Eaters — and by Harry Potter (Daniel Radcliffe), who barely escaped alive.

To this darkness, the new film adds a sense of mounting frustration. Just as the greatest trick the devil ever played was to convince the world he did not exist, so too Voldemort keeps a low profile throughout most of this story — allowing the wizarding world to think rumours of his return have been greatly exaggerated.

Thus, when Harry and his mentor, Hogwarts Headmaster Albus Dumbledore (Michael Gambon), try to warn their fellow wizards that Voldemort has come back, and that the wizarding world needs to prepare for the inevitable showdown, they are accused — by the government, the media and their friends — of lying and fearmongering.

Chief among these accusers is Dolores Umbridge (Vera Drake’s Imelda Staunton) — an official from the Ministry of Magic who has been appointed the new Defence Against the Dark Arts teacher, so the government can keep an eye on Dumbledore.

Unlike previous DADA teachers, who were all buffoonish or sympathetic, Umbridge is a genuinely nasty person. Her exceedingly proper etiquette and her demure sense of style — the smiles, the wee laugh, the pink clothes and the china plates with cute animated kittens — mask a cruel authoritarianism. She is, in fact, a sadist.

Thanks to story elements such as these, the film version of Phoenix was never going to be the fun, escapist lark the previous movies were. But one still cannot help but think the film could have been more than what it is.

Where, for example, is the sense of wonder and enchantment? Once again, Harry learns a few new things about Hogwarts and the wizarding world in general; but there is little sense of awe about it this time. For example, when a door to a secret room appears in the wall of one corridor, it is a convenient plot device, nothing more.

And where is the humour? At times, the film aims for a little levity; but more often than not, these moments feel forced, dutiful — even recycled from earlier movies.

Worst of all, with the exception of a few scenes featuring Alan Rickman’s delectably devious Severus Snape, there are few — if any — of the ‘grace notes’ which have made each of the previous films memorable in their own way. Indeed, it is striking how this film brings together so many talented British actors, yet gives them so little to do.

This may be because the film is directed by David Yates, who is the fourth director to work on this series and the first with no experience on a Hollywood movie. But a bigger problem is probably the screenplay, by Michael Goldenberg. The earlier films, all of which were written by Steven Kloves, had to leave out bits of the books, and sometimes the omissions were puzzling — but they were never this clumsy.

At a few points in this film, we get flashbacks to Harry’s younger days — to scenes from the earlier movies. It is startling to realize just how much growing up Harry has done since the first film came out six years ago.

It is also sobering to think that a series which began with such potential is beginning to show serious signs of sequel fatigue. Let us hope that the franchise gets its second wind, and soon.

July 29, 2007 Jesus Makes Me Laugh -- promo reel
Recent Comments
0 | Leave a Comment
"Whoever wrote this article called Mary a virgin. She was only a virgin till after ..."
Ronnette Harvey The latest attempt to film all ..."
"In addition to this explanation of why "Paul says he can’t tell the Roman Christians ..."
PaulDT Paul, Apostle of Christ: a scene ..."
"Outstanding outline and identification of references and sources as well as background. Thank you so ..."
PaulDT Paul, Apostle of Christ: a scene ..."
"" So now, basically, the Magi are just a substitute for Santa Claus." <- Well... ..."
The 3 Wise Men — not ..."
Browse Our Archives
Follow Us!