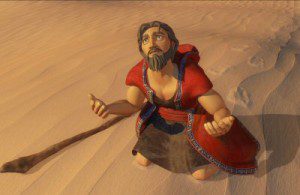 Another year, another Moses movie. Cecil B. DeMille made two movies called The Ten Commandments — one in 1923, during the silent era, and the other in 1956, starring Charlton Heston and a whole lot of deliciously campy dialogue — so it only makes sense that others would continue to tell this story, even to the point of recycling the title. In the past few years alone, we have seen a TV mini-series called The Ten Commandments as well as The Ten Commandments: The Musical — a straight-to-DVD adaptation of a stage production starring Val Kilmer, who once provided the voice of Moses for the big-budget cartoon The Prince of Egypt.

Now comes the low-budget cartoon — and this film, too, features at least one actor who has parted the Red Sea before. The computer-animated version of The Ten Commandments, which opens in theatres this week, is the first in a projected 12-part series of epic Bible stories, and the warm, smooth voice that narrates the movie is provided by Ben Kingsley, who once starred in the 1996 mini-series Moses.

The new film is pretty clearly intended for young children and their families, so much so that one of the Israelites, tired of trudging through the desert, actually moans, “Are we there yet?” as though he were a child buckled into the back seat of a station wagon. Joshua, meanwhile, is little more than a kid in his early teens, itching for a chance to go up Mount Sinai. And as the Hebrews march down the dry path that crosses the Red Sea, a child sticks his head through the wall of water to get a good look at the dolphins, fish, and sea turtles swimming by. I don’t recall seeing that in a Moses movie before, but it’s precisely the sort of thing my friends and I used to have fun imagining when we discussed this story in Sunday school.

The script, by Ed Naha (Honey I Shrunk the Kids), also tones down a few bits that might not have felt appropriate for a “family” movie, even though the stories do come from the Bible. When Moses (voiced by Christian Slater), an Egyptian prince unaware of his Hebrew parentage, sees an Egyptian taskmaster beating a Hebrew slave, he does not kill the taskmaster in cold blood, as the Bible tells it; instead, Moses kills the taskmaster accidentally, in self-defense, after the taskmaster attacks him.

In a huge coincidence, this accidental killing is immediately followed by the arrival of Moses’ brother Aaron (Christopher Gaze), who shows up from out of nowhere and spells out the entire story of Moses’ origins, and then tells Moses to flee for his life. It’s an awfully contrived moment, but the equivalent scene in The Prince of Egypt — in which Moses realizes he is a Hebrew because he recognizes a lullaby that his mother had sung to him when he was only a few months old — wasn’t particularly believable either. In fairness to the filmmakers, the Bible is not exactly clear on when or how Moses learned of his Hebrew heritage, and neither of these cartoons has the time to create a long but satisfying subplot like the one DeMille used.

The new film does borrow some other elements from DeMille, though. The rebellion of Dathan (Lee Tockar) — and his punishment when the earth opens up and swallows him — has been taken from Numbers 16 and fused with the golden-calf incident in Exodus 32, just as it was in both of DeMille’s films. And Moses’ previously brown hair turns bright white after one of his encounters with God on the holy mountain.

To its credit, the film also includes a number of episodes that are missing from some of the better-known films about Moses. When God (Elliott Gould) first speaks to Moses through the burning bush, he gives Moses more than one sign to take back to Pharaoh Ramses (Alfred Molina). And when the newly-liberated Hebrews complain about the lack of food as they walk from the Red Sea to Sinai, God sends a handful of miracles — water from a rock, manna every morning, and quail from the sky.

The production values won’t give the folks at Pixar any nightmares. Computers have made it possible for any animator to create impossibly active camera angles, which, in this case, means we get numerous shots that swoop through the palace halls or race down the city streets. But creating believable characters is still a complex task, and, in that regard, The Ten Commandments is just barely passable.

Still, given their budget and target audience, it’s not as though the filmmakers were trying to compete with the blockbusters. For youngsters weaned on any number of TV shows — or on VeggieTales, for that matter — this film may even be a step up in quality. And some of the animation is quite striking in its own way, particularly the spooky yet mystical effects that are used for the Angel of Death.

Grown-ups watching the film with their children may wish the writing and acting had been pitched at a slightly more mature level, though. From the opening scenes, where the Pharaoh and his magicians mutter their dislike of Hebrews, the film has the feel of a sincere grade-school play. When the Hebrews arrive at the Red Sea, Miriam (Kathleen Barr) asks Moses, her kid brother, if God has told him how they will cross this vast body of water. “Not exactly,” Moses replies. “I wouldn’t let too many people know that,” says Miriam, drawing out the word “I” for comic effect.

When it comes out on DVD, The Ten Commandments will make a decent addition to church and family video libraries. As a straightforward introduction to the biblical story, it is arguably better than some of the splashier or more sensational movies out there. Whether it merits a special trip to the big screen, though, is another matter.

1. God tells Miriam and Aaron he speaks to everyone, but to Moses he makes himself “known.” What is the difference? How does God speak to us? How do we hear him?

2. What do you think it means when the narrator says Moses was the only man who knew God “face to face”? Does God have a face? What about Jesus? Would seeing his face be the same as seeing God’s face the way Moses did? (See John 14:8-11.)

3. Before going up Mount Sinai, Moses tells the Israelites: “One day, you will be able to open your hearts to God.” Why do you think they weren’t ready yet?

4. The adult Moses says to Miriam that if it had not been for her watching out for him when he was a baby floating down the Nile, God might not have chosen him. How does God use our faithful actions? Do you think he depends on them?

The Ten Commandments is rated PG for some mild peril, including biblically-based scenes of slaves being beaten, a taskmaster dying at Moses’ hands, plagues striking the Egyptians, riders on chariots being drowned in the Red Sea, and disobedient Hebrews being punished by God as the ground opens up and swallows them.

— A version of this review first appeared at Christianity Today Movies.

October 18, 2007
A glimpse into the Prince Caspian movie.
Next Post