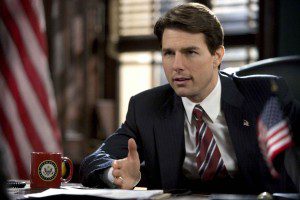 Imagine that you are Tom Cruise, and that your career and reputation have begun to falter a wee bit, and so you decide to launch a new phase in your career by, say, taking charge of an entire studio. Imagine that the first film released under your leadership — a film that, not incidentally, features you as one of its stars — is about to come out. Now imagine that the only publicity you intend to do for this movie is a single, private, hour-long, one-on-one interview with a reporter who works for a TV network but brings no recording devices whatsoever with her, let alone anything resembling a camera crew. No photos, no televised interviews, no beaming face on television screens everywhere; instead, nothing but your words, as scribbled down in shorthand by a reporter who, incidentally, doesn’t like your movies very much.

Does that sound implausible? Of course it does. And it is just as implausible as one of the main narrative threads of Lions for Lambs, the first film Cruise has starred in since he was unceremoniously booted from the Paramount lot and struck a deal to take the reins at United Artists. Cruise plays Senator Jasper Irving, a hotshot politician with a background in military intelligence who invites a journalist, Janine Roth (Meryl Streep), to his office for an exclusive interview, where he reveals that he is one of the masterminds behind a brand new military strategy that is unfolding in Afghanistan as they speak. Jasper tells Janine he is giving her a big scoop, and he clearly thinks the new strategy and his involvement with it will boost his own political ambitions — but he isn’t exactly maximizing his exposure, or the strategy’s.

Why is a mere senator and not, say, the Defense Secretary discussing key military tactics with the press? Good question. There is a brief line to the effect that Jasper is chummier with the president than actual members of the administration, but still, come on. It seems pretty clear that the meeting between Jasper and Janine has been contrived by the filmmakers simply to provide an opportunity for a lot of back-and-forth arguments about the so-called war on terror. And such a set-up would be forgivable, if the arguments were remotely interesting or enlightening.

But alas, they are not. Directed by Robert Redford from a script by Matthew Michael Carnahan (who also wrote The Kingdom), Lions for Lambs tells three stories that take place simultaneously over the course of an hour, two of which consist of people sitting and talking, and talking, and talking — and none of them say anything that hasn’t already been said a thousand times, and often better, in the past several years. The meeting between the senator and the journalist is one such story. The other talky subplot stars Redford himself as Stephen Malley, a political-science professor who tries to persuade one of his students, Todd Hayes (Andrew Garfield), to become more engaged in his class — and in the political life of the nation.

The third story concerns two former students of Stephen’s, Arian Finch (Derek Luke) and Ernest Rodriguez (Michael Peña), who decided to become more engaged in the life of their nation by joining the army — which wasn’t exactly what their prof had in mind. Not only did they enlist in the military, they signed up for special forces, and so they just happen to be involved in the big new strategy that the senator is trying to promote to the journalist in his cushy air-conditioned office. Something goes wrong, though, and their helicopter is attacked. Ernest falls out, and Arian jumps after him, and they spend the rest of the film coping with wounds, shooting at enemies in the shadows, and waiting for their comrades to rescue them.

Unlike other recent politically-charged films such as Redacted and In the Valley of Elah, in which the American soldiers who serve in Iraq are revealed to be murderous rapists and/or sociopaths, Lions for Lambs belongs firmly to the camp which “supports the troops” while doubting the government that gives them their orders. The title itself stems from a comment made by a German officer during World War I, who said of the British army, “Never have I seen such lions led by such lambs.” In this film, Arian and Ernest are the lions, and Jasper is the lamb who has squandered their courage by being overly confident in his new military strategy and in the intelligence on which it was based — though there is also something lamb-like about Janine, who is confronted with the possibility that she and her colleagues in the media were too easy on the government during the run-up to the Iraq War.

But wait, all the military action that we see in this film is set in Afghanistan, not in Iraq. And wasn’t the invasion of Afghanistan almost universally accepted as a legitimate response to Osama bin Laden’s plotting and the Taliban’s protection of him? As with so much political discourse these days, there is confusion in this film over whether the target of its anger should be the way in which the war is being waged, or the fact that there is even a war in the first place. At times the film acknowledges that the terrorists struck first, and that the United States was obliged to respond in some way, while at other times the characters never seem to get beyond venting their rage at the government types who “started” this war.

It doesn’t help that characters toss off glib, inaccurate and shortsighted comments like Janine’s remark that World War II was finished in “less than five” years, so why has the current conflict dragged on for more than six. Well, for starters, while the United States was a latecomer to WWII, it is generally believed to have lasted six years — or eight, if you follow the historians who say that it began with Japan’s invasion of Manchuria in 1937 — and it was fought against centralized enemies, and it cost the lives of hundreds of thousands of conscripted troops, and it was over as soon as it was because Japan was hit by atomic bombs. Does Janine want to bring back the draft and put the nuclear option back on the table? And if she is going to complain that America was friendly with Saddam Hussein’s Iraq back when they shared a common enemy in Iran, what does she do with the fact that we won WWII partly with the help of Stalinist Russia, and that our alliance with him helped to enslave an entire generation of Eastern Europeans behind the Iron Curtain?

History is full of ironies and tragedies such as these, but the film allows no time to unpack them because, by the time you have started to process one of these debating points, the film has already leapt to another one. It is also kind of bizarre how the film tries to draw a strong parallel between the Vietnam War and the current conflict, but Exhibit A is … the fictitious military strategy created by Jasper. The resulting film is somewhat shallow and not very useful to either side in the current debate.

There is, admittedly, something striking about a film in which established Hollywood stars like Redford and Streep make an impassioned political plea while supposedly staying in character — and it is quite daring of Cruise to play a character whose vacant enthusiasm so closely parallels the vibe he gives off whenever he’s promoting a new movie or girlfriend in real life. But if there was ever a film that not only preached to the choir but threatened to put it to sleep, this is it.

1. Senator Jasper Irving, a conservative, uses words like “righteousness” and “moral obligation” to define the United States’ mission overseas, and describes the enemy as “evil.” Does this sort of vocabulary help? Does it obscure anything? How do we define such things? Should the film’s more liberal characters use words like these?

2. A plaque on Jasper’s wall quotes Theodore Roosevelt: “If I must choose between righteousness and peace, I choose righteousness.” How should followers of Christ respond to this sort of statement? Consider Jesus’ words about peacemaking (e.g. Matthew 5:9) and coming not to bring peace but a sword (e.g. Matthew 10:34).

4. Stephen tells Todd that if he tries to make things better and fails, then that’ okay, because “at least you did something.” Is it enough to encourage people to “do something”? What about the disappointment that Stephen feels when Arian and Ernest decide to become more engaged in the world by joining the army?

Lions for Lambs is rated R for some war violence (all of which takes place at night and is obscured by dim lighting) and language (a couple dozen four-letter words and a few instances of the names God and Jesus being spoken in vain). For families with older teens, the film could be a good starting point for conversation about current conflicts in the Middle East, and what Scripture might — or might not — say on the topic. See the discussion questions above.

— A version of this review was first posted at Christianity Today Movies.

November 9, 2007 Lions for Lambs -- the review's up!
Recent Comments
0 | Leave a Comment
""AD" stands for "Anno Domini", a Latin expression meaning "In the Year of Our Lord".So ..."
Peter T Chattaway The Chosen — season one, episode ..."
"Why does it say at the start of episode 3 that it takes place 26 ..."
Desiree Chamberlain The Chosen — season one, episode ..."
"What about Hellboy, The Grudge, Ghoulies, and Anaconda?"
45th Spiderbob Group VGCP When R-rated franchises go PG-13 …
"Not yet, but I might do something like that once Season 2 is complete."
Peter T Chattaway The Chosen — season one scripture ..."
Browse Our Archives
get the latest from
FilmChat
Sign up for our newsletter
POPULAR AT PATHEOS Entertainment
1