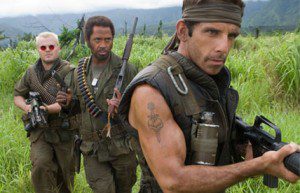 Very few people saw Empire of the Sun when it came out 21 years ago, and possibly even fewer people remember it. But the effects of that World War II film — one of Steven Spielberg’s most underrated efforts — live with us still. It introduced the world to a 13-year-old kid from Wales named Christian Bale, who has since conquered the box office as The Dark Knight. It also featured a young man named Ben Stiller, in one of his very first roles, as a prisoner of war named Dainty. And it was while working on that film that Stiller first got the idea for Tropic Thunder.

Directed by Stiller from a script he wrote with Etan Cohen (not to be confused with Ethan Coen of the Coen brothers) and Justin Theroux, Tropic Thunder concerns a bunch of actors who are working on a Vietnam War epic — a genre that was, itself, very popular in the late 1980s. Things are going very badly on the set, though, so their exasperated director, tired of fighting over the script and how to interpret it, drops them in the middle of a jungle rigged with explosives and hidden cameras, hoping to catch some genuine emotions instead. Naturally, however, the actors get lost — and when they stumble across a heavily armed drug cartel, at least some of them assume that they have met some fellow actors.

So the movie is, on one level, about art imitating life, and about life imitating art, but it is also about the lengths that people will go just to get a movie made, and to win the fortune and glory that might come with it. As such, the film is a sometimes blisteringly funny send-up of the movie industry, but it also raises some interesting questions about the nature of acting that, coming from these people, feels not only like good-natured self-mockery but also just a bit like confessional soul-searching.

The film begins with a series of fake ads for movies and products that are associated with the actors who have been dropped into the jungle. First up, rapper Alpa Chino (Brandon T. Jackson) promotes a beverage with a somewhat lewd name. Then, action hero Tugg Speedman (Stiller) stars in the umpteenth sequel to a movie that had a somewhat ridiculous premise to begin with. This is followed by a trailer for the flatulence-heavy antics of comedian Jeff Portnoy (Jack Black), plus a trailer for an earnest melodrama about gay monks starring Kirk Lazarus (Robert Downey Jr.), an Oscar-winning Australian who is very, very serious about getting into character.

Thrown together on the set of their Vietnam War movie, all of these actors are out to prove one thing or another. Tugg worries that his days as an action-movie star are coming to an end, and he hopes to prove himself as an actual thespian; Jeff is battling drug addiction, and the fact that an animal steals the stuff he brought with him into the jungle sends him into serious withdrawal; and most significantly, Kirk has had his pigmentation treated by a doctor so that he can pass himself off as an African-American. The fact that Kirk insists on talking like a black man from the 1960s, even when there are no cameras rolling, gets on the nerves of his genuinely black co-star Alpa Chino, who fires back with a series of Aussie stereotypes. (No one, incidentally, asks Alpa Chino why he is named after an Italian-American actor.)

Thrown into the jungle and left to their own devices, it is Kirk, interestingly, who is most alert to the fact that they are surrounded by genuine peril. He may have a weird obsession with staying in character — at one point, he says he won’t be dropping it until he has recorded the DVD commentary — but he is also very aware of the distinction between artifice and reality, and he is extremely articulate when it comes to explaining the “tools” that an actor uses. Tugg, on the other hand, has been involved in so many special-effects movies that he assumes everything around them is an elaborate prop; at one point, he even drinks the blood from a severed head in an effort to “prove” to his castmates that it’s really only corn syrup.

If that sounds like an extreme gag, well, it is, and this movie, which easily earns its R rating, has plenty more like it. A recurring gag in the film — and one that has earned threats of boycotts and more from advocates for the mentally disabled — concerns Tugg’s disappointment that he didn’t win an Oscar for playing a “retard,” as he and the other actors keep calling him, in a movie called Simple Jack. Much has been made of the offensiveness of this movie-within-a-movie, but that is, in a way, the point: the target of the film’s satire is not the mentally disabled themselves, but the way Hollywood romanticizes mental disabilities, and the way actors take on such roles as “stunts” in a bid to win awards.

Meanwhile, Jeff’s desperate need for drugs drives him to bite the animals that cross his path, and to make obscene offers to his co-stars. And back home in Hollywood, Tugg’s agent Rick Peck (Matthew McConaughey, looking a bit out of place in a role originally written for Owen Wilson) tries to figure out what has happened to his client, but the extremely callous and profane studio chief is all too willing to let the actors die and claim the insurance money, if that’s what it comes to.

The movie isn’t always as funny as it would like to be, but it you can stomach the more grotesque stuff, there is a fair bit to enjoy here, and some of it may even qualify as “redemptive.” Downey Jr. is especially amusing — and fascinating — as an actor given to self-serious pronouncements such as, “I don’t read the script, the script reads me.” There is a moment where Kirk confronts his fear that he is so good at slipping in and out of his roles that he may have no identity of his own, and it is impossible not to think that Downey Jr. might be playing himself at this point — that is, if he were a blonde-haired, blue-eyed Aussie in blackface, at any rate.

The other actors — Tugg and Jeff, in particular — face similar moments of truth, where the extremity of their situation forces them to confront their deepest fears and come out on the other side a little wiser, but always in a humorous way. The result is a bizarre little film that manages to be both an exercise in tasteless humor and a commentary on Hollywood’s tastelessness, as well as an oddly heartfelt tribute to people who, based on what’s shown here, are working in a heartless industry.

1. Is this movie about acting as a profession only, or does it have anything to say about the way we “perform” certain “roles” in our own lives? Have you ever had a moment where you said to yourself, as Kirk Lazarus does, “I think I might be nobody”? If so, how did you get through that moment?

2. Where does our true identity lie? In the acclaim we get from others? In our jobs? In our personal friendships? In our relationship with God? In the things we consume? In a combination of these things? How important should each of these things be?

3. How do you feel the film portrayed the movies about the gay monks, the mentally disabled person, and so on? Was it mocking the subjects of those films, or mocking the way Hollywood treats those subjects? What’s the difference, if any?

Tropic Thunder is rated R for pervasive language including sexual references (four-letter words throughout the movie, plus a few uses of Jesus’ name in vain; the rap star also uses sexy dancers to promote a beverage with a somewhat lewd name), violent content (people are shot, stabbed and blown up, sometimes in very bloody ways; an actor drinks blood from a severed head believing it is a prop filled with corn syrup; etc.) and drug material (one character is fighting an addiction and goes through withdrawal; the protagonists come across a drug cartel in the middle of the jungle). The movie also features a lot of politically incorrect material as the actors debate how to portray racial minorities and the mentally challenged. One character also comes out of the closet, and is later seen with a real-life gay celebrity.

August 14, 2008 Tropic Thunder -- the review's up!
Recent Comments
0 | Leave a Comment
"Earth actually does exist in the Dark City universe. Early in the film when John ..."
Edward Clint Dark City and the ambiguous ending.
"I don't always agree with your opinions, but your reviews are never less than interesting ..."
Laura-Lee Rahn The top-grossing Italian movie of 2019: ..."
"Whoever wrote this article called Mary a virgin. She was only a virgin till after ..."
Ronnette Harvey The latest attempt to film all ..."
"In addition to this explanation of why "Paul says he can’t tell the Roman Christians ..."
PaulDT Paul, Apostle of Christ: a scene ..."
Browse Our Archives
Follow Us!