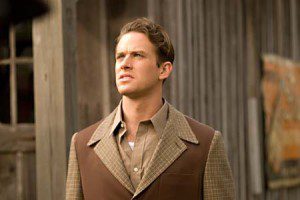 Armie Hammer came very close to playing Batman, in George Miller’s apparently now-defunct Justice League movie. But he got to play a superhero of a different sort when he took on the role of Billy Graham, one of the best-known and most widely-respected evangelists in history, in Billy: The Early Years, which opens Friday.

Hammer, who turned 22 in August, plays Graham from the ages of 16 to 31, before he became the world-famous preacher that he is today. The film covers Graham’s conversion at a revival meeting in 1934; his courtship of Ruth Bell (Stefanie Butler), who he married in 1943; and his crisis of faith when his fellow evangelist Charles Templeton (Kristoffer Polaha) became an agnostic in the late 1940s.

Watching the film, I was curious as to how much of that voice was yours and how much was you playing the role, and talking to you now, I still am not sure. What was it like taking on the voice?

Armie Hammer: His voice was probably the most challenging thing about Billy Graham, because I just discovered this as I was doing a lot of research. His accent was not concrete. It changed depending on who he talked to. If he thought his accent would help him a little bit, he’d lay it on a little thicker. If he was speaking to someone in New York, you’d almost hear no accent at all. It was very interesting, and when he preached, it was a completely different accent than when he just normally spoke. So his voice was actually one of the more difficult things that I had to work with.

That’s interesting, because we don’t normally think of him speaking normally, do we. We just think of the preaching

Very often, when actors take on famous characters, there is talk about finding that right balance between impersonating someone and creating a character. For example, Philip Seymour Hoffman doing Capote. How did you find that challenge, creating a character apart from the preaching?

Hammer: It was something that I was so excited about, because when I was watching a lot of Billy Graham’s interviews, when he would do talk shows and stuff like that, he had so much of a personality that you never really got to see shine through. So it was a multi-faceted blessing, because I got to play someone as well-known as Billy Graham, but at the same time, because no one really knows Billy Graham’s personal life, I was given a little more liberty there to create the character.

There’s an interview on YouTube where he’s being interviewed by Woody Allen — have you seen that?

Hammer: That is the best interview in the world! He held his own against Woody Allen and was cracking the crowd up. It was so impressive, that interview.

But even there, you can sense that he’s staying on message, as it were —

— whereas your film covers all these very intimate moments — romancing his wife-to-be, dealing with his parents — so how was it, getting into those parts of his life, where there was no message?

But it was great bringing a human side to someone who has been so venerated and respected as Billy Graham. I think people can forget that he’s a human as well.

What sort of research did you do prior to the role? You’ve been working with Gigi lately, but was there any contact with the Graham family prior to that?

Hammer: No, no, I didn’t actually contact the Graham family. I didn’t want to bother them. People have been wanting so much from them their entire life. Since the mid- to late ’40s, people have wanted something from Billy constantly, and I didn’t want to be one of those people. I wanted to give him something. I wanted to do my own research — and thank God for YouTube, man, because I was able to find all his sermons and that awesome interview.

And what about, say, reading up on his life and stuff like that?

Hammer: His autobiography, Just as I Am, gave me so many great insights and I was thrilled to read that, and it’s a fascinating book. And regardless of the fact that it’s as thick as tree trunk, it flies. It’s a great read. So that was great, and I was also able to get my hands on a bunch of material, notes on sermons and stuff like that. The internet was so helpful. Any actor who wants to be an actor? Forget going to the library, man. Just go to YouTube and the internet, that’s all you need.

Wheaton College has an extensive Graham library. Did you check them out at all?

Hammer: Not in person, but I did all the research online about that stuff. There is great stuff all over the place. I mean, so many places have dedicated space and time to Billy Graham, that was one of the biggest blessings of this movie: not just the blessings of actually portraying this character in person, but the fact that there was that much stuff that I could really look up and get into. It was incredible.

Before you took the role and you “had to” know all about Billy Graham, how aware of him were you? Had you ever been to one of his crusades? Or was that something you only got into after you got the part?

Hammer: I knew quite a bit about Billy Graham from a historic standpoint, from a viewpoint of this man had such a heavy hand in sculpting modern day Christendom in the 20th century. I definitely was aware of the historical importance of Billy Graham. I had never been to any of his crusades — I was too young for that — and getting more and more into this role, I was able to get more and more into his teachings and familiarize myself with those, which was great. So I was able to learn so much through all this.

If there were any one or two things that you took away from your research into the character, what would those be?

Hammer: The biggest thing that surprised me was his personality, and how much of it he actually had. When you watch him preach, he’s preaching, he’s reading from the Bible and telling people what they need to hear. But when you see him interviewed and you see his personal life, you realize this is a funny, quirky dude. He just loved to have fun, he loved hanging out, he loved being with friends, and that’s the side of Billy Graham that I feel like no one really gets to know. And that’s too bad, because that aspect of Billy Graham is just as fascinating and fun as Billy Graham the preacher.

The question has to come up when you play a character like this: What about your own personal beliefs?

Hammer: I would say that I do have my own spiritual life, and I do value it very much, and I feel like spirituality is something that is for each person and something that needs to be alive for each and every person. Getting a chance to really get into this, I was given a chance to get into the spiritual life of Billy Graham and, as an actor, take that on. I started reading the Bible quite a bit, so I could understand the word that Billy Graham was saying. His sermons were so rich and deep with revelations, that as an actor, if you just say those words and you don’t understand the meaning behind them, it won’t make sense. It’ll fall flat. But if I can understand his sermons on a deeper level by reading up on the Bible and familiarizing myself with all that, then I’m able to, as an actor, experience that as well, and that was a beautiful thing.

Is there anything from Graham’s spiritual teachings that you would take away from the film, or apply to your own spiritual life?

Hammer: I’m sure that, in the process, I just discovered so much about my own spiritual life. I mean, nothing’s jumping to the top of my head.

What about the Charles Templeton side of the story, how he had all these doubts that precipitated Billy Graham’s own crisis of faith?

Hammer: That is one of my favorite parts of this movie, because they’re both presented with a fundamental question of spirituality and human faith, of, “Do I take this literally and live by reason, or do I live by faith? My mind tells me that faith doesn’t work out, but faith tells me that I shouldn’t listen to my mind.” And it’s a question that has plagued humanity since the beginning of time. And it’s amazing to watch these two people deal with the exact same question so differently.

In terms of Billy Graham, it shakes him for a little bit, but then does nothing but cement his faith. Whereas Charles Templeton deals with this problem and he allows it to destroy his faith, and it’s so fascinating that they both watched the exact same footage [of the Holocaust], in the movie, and had such polar opposite reactions to it. I think that it’s amazing to show the humanity of both of them.

Did you do any research into Templeton as well?

Hammer: I did. Not as much as I did into Billy Graham, but I did want to familiarize myself with it, and their friendship, and how they dealt with each other. They were really best friends, and it was great — they traveled together, they preached together, they hung out all the time together. It’s really great how the two of them became such good friends, and then the two of them were at the same time susceptible to something so small as a crisis of faith that destroyed their relationship.

Did it actually destroy their relationship?

Hammer: Well, the problem is the crisis of faith turned Charles Templeton so bitter toward everything that he knew, which is why he wrote that book Farewell to God. As soon as he became an agnostic, he became very outspoken about it, and because of Billy Graham’s position, they just couldn’t agree on that, y’know?

But Billy Graham did actually go visit him in the hospital before he died [in 2001]. And Gigi told me that when her father went to go see him before he died, he had Alzheimer’s, and he couldn’t remember anything except the scriptures he had memorized as a kid. It was fascinating, to think that a man who gave all that up and became an agnostic, now that’s all he remembers. How tormenting must that be?

— A version of this interview was first published at Christianity Today Movies.

October 7, 2008 The Dark Toy.
Recent Comments
0 | Leave a Comment
Browse Our Archives
get the latest updates from
FilmChat
and the Patheos
Entertainment
Channel
POPULAR AT PATHEOS Entertainment
1