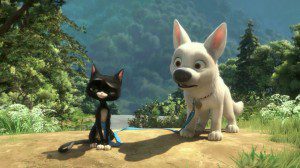 It has been nearly three years since Disney and Pixar settled their differences, leading one company to buy the other. But while Disney technically owns the Pixar label now, the minds that created Pixar in the first place have been calling the shots at Disney Animation ever since the merger — and the first significant result of their efforts is Bolt, a cartoon that could perhaps be best described as “Pixar Lite.”

The movie — which concerns a dog who stars on a hit TV show and is accidentally stranded in another part of the country — was originally conceived by Chris Sanders, whose Lilo & Stitch was one of the very few bona fide animated hits to come out of the Mouse House in recent years. But when Pixar chief John Lasseter took the reins at Disney, he dismissed Sanders from the project and gave the job of directing this film to Byron Howard and Chris Williams, both of whom had worked there as writers and artists but neither of whom had ever directed a feature-length film before.

Characters were redesigned, the story was rewritten, Lasseter took an executive-producer credit, and the end result is a film that borrows more than a few elements from Pixar’s earlier films — including, thankfully, some of their heart.

Take the character of Bolt (voice of John Travolta) himself. He’s a dog who plays a genetically-altered super-mutt named Bolt on a TV show named Bolt — but, like Buzz Lightyear in the first Toy Story, he doesn’t realize that he’s living in a world of fiction. He thinks the TV show is real, and that he is really lifting cars with his teeth and burning holes through metal objects with his laser vision, and that Penny (Miley Cyrus), the girl who raised him, really needs him to protect her every week. He doesn’t realize there are special-effects teams around every corner, anticipating and recording his every superheroic move. It’s like The Truman Show for puppies.

And then, one day, to keep their ratings up, the TV show’s producers decide to play with their format. Instead of ending their newest episode with Bolt and Penny together, as they have on all their previous episodes, they end on a cliffhanger, with Penny abducted by the bad guys and Bolt stranded in the villains’ lair — and Bolt, desperate to save Penny, escapes from the TV studio as soon as he can. One thing leads to another, and the next thing he knows, Bolt has been accidentally taped inside a cardboard box and shipped to New York City — where he becomes convinced that the pink Styrofoam packing peanuts in the box have robbed him of his powers.

Since Bolt is convinced that all cats are agents of the evil Green-Eyed Man (Malcolm McDowell) — a villain whose cat-eye-shaped symbol looks rather like the heroes’ logo in The Incredibles — Bolt finds a homeless alley cat named Mittens (Susie Essman) and forces her to help him find his way back across the country, and along the way they are joined by a hamster named Rhino (Mark Walton) who is such a big, big, big fan of the TV show that it’s not entirely clear at first whether he knows that it’s really all just make-believe. And so, like Woody in Toy Story 2, Bolt, cut off from the human child that owns him, learns about the meaning of fame, home, and other things with the help of a female who has a sad story to tell and a short, hairy male who spends most of the movie behind plastic (in this case, a hamster ball).

The three main animal characters are all funny and engaging in their own ways, and that is as much a credit to the animators as it is to the actors who provided the animals’ voices: Bolt is fiercely loyal, tough and determined, yet also wide-eyed with bewilderment when he finds he can no longer run through windows and fences or leap across big holes in the ground; Mittens is scrappy and sarcastic but not too abrasive, before she reveals that she, too, can care for a friend; and Rhino steals the show with his zealous fanboyishness. But there are other, smaller characters who are just as entertaining, most notably the pigeons who pop up here and there across the country, each reflecting the accents and mannerisms of their various locales.

What makes all these characters work is the incredible balance the animators have struck between carefully observed animal behaviour — the way Mittens licks her paws, the way the pigeons keep jerking their necks and shedding their feathers — and basic human emotions. The facial expressions are particularly striking in this regard; in one scene, Bolt, who has been deeply, suddenly saddened by something, sinks back into the shadows, and though he has the posture of a dog, his eyes transcend any distinction we might make between canine and human.

The film has a few problems, not least of which is the fact that you have to swallow some major plot holes before you can lose yourself in the story. The first time we see Bolt, he’s just a pup who has been picked from the animal rescue shelter by Penny. Then the movie jumps ahead five years, into the middle of an episode from their TV show. How old is the show? At what point in Bolt’s life did it begin? Surely such an action-packed show could not have started with a mere puppy — it would have needed a grown-up dog who was ready to defend his master against strangers and enemies alike — but then, what sort of life did Bolt have with Penny before the show began? And at what point did Penny become a child star, anyway? The movie suggests repeatedly that her mother (Grey DeLisle) might not be on quite the same page as the agents and producers who control Penny’s career — but if she isn’t the typical showbiz mom, then what is her daughter doing here in the first place?

And while I wouldn’t want to press this point too strongly, there is always a whiff of condescension around high-profile Hollywood movies that go on and on about the soul-crushing vacuous-ness of the entertainment industry — the heartless agents, the meaningless talk-show engagements, the press junkets, the merchandising, the strangers who desperately pitch their ideas to passing celebrities — and the virtues of a life lived far, far away from that environment. This irony is all the more pronounced when one of the main characters is played by a heavily-merchandized child star (i.e. Cyrus) who was brought into the business by her own country-music star father.

But the children who are this film’s main audience are probably as oblivious to those issues as Bolt is to the fact that he’s starring in a TV show. And as entertainment, Bolt does deliver. It’s funny, charming, and a feast for the eyes — especially if you see it in 3-D. It is also quite probably the best animated film made by Disney in years — and we can only hope it’s a sign of even better things to come.

1. When have you believed something to be true but found out you were wrong? (Think, for example, of Santa Claus.) How did that affect you?

2. How does the TV show embolden characters like Rhino to be better people? How is Bolt himself emboldened to become more heroic? Is he a bigger hero at the beginning of the film, or at the end? Why?

3. Does something have to be “true” to inspire us? Why or why not? Are there different kinds of “truth”? (Factual, thematic, etc.)

4. What do each of the characters learn about themselves in this story?

Bolt is rated PG for some mild action and peril. The TV show-within-the-movie includes superheroic, James Bondian stuff like exploding helicopters and cars flipping in the air, while the rest of the movie has less violent but similarly dangerous scenes of animals jumping off bridges and onto moving trains because they think they are superheroic. A brief reference is made to the fact that Bolt is bleeding after he jumps out of a moving vehicle at high speed, but the blood is never shown. Rhino, a huge fan of the TV show, talks pompously about beating up security guards and snapping one man’s neck, but since he’s only a hamster, he’s harmless.

November 21, 2008 Bolt -- the review's up!
Recent Comments
0 | Leave a Comment
Browse Our Archives
get the latest updates from
FilmChat
and the Patheos
Entertainment
Channel
POPULAR AT PATHEOS Entertainment
1 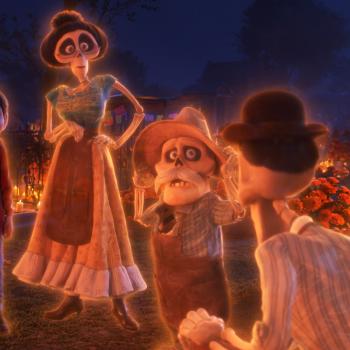 Entertainment
Box office: Coco stays on top during a...
FilmChat