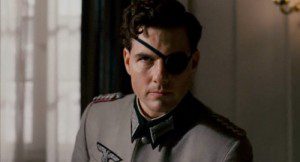 These days, it is impossible to watch a Tom Cruise movie without thinking of what it might mean to the movie star himself. Two years ago, his Mission: Impossible character got married, around the time Cruise himself got hitched to Katie Holmes. Then, after his antics on Oprah’s show and elsewhere got him in trouble with the media and with the powers that be at Paramount, forcing him to look for work elsewhere, he played a hotshot politician who criticizes a reporter to her face in Lions for Lambs and a foul-mouthed studio mogul who has zero sympathy for the people that work for him in Tropic Thunder. Now comes Valkyrie, the second film to be made by United Artists since Cruise took the reins at that struggling studio, and over the past year, thanks to constantly shifting release dates and rumours of reshoots, the film has acquired the reputation of a “troubled” production. It is tempting, then, to read an element of autobiography into the film, as Cruise plays a wounded German officer who is already unpopular with the Nazi high command when he joins in a plot to assassinate Adolf Hitler — a plot that we know is doomed to fail.

Cruise isn’t the only one whose career has been stumbling lately, though. Valkyrie is also the first film that director Bryan Singer has made since his Superman movie came out two years ago and failed to live up to many people’s expectations — and there is a sense in which Singer seems to be trying to get back to his roots, teaming up with screenwriter Christopher McQuarrie for the first time since their Oscar-winning breakthrough The Usual Suspects came out thirteen years ago. Like that film, this new film (which McQuarrie co-wrote with Nathan Alexander) involves several men who collaborate on a conspiracy — but this time, instead of a heist, they plan to murder one of the most powerful men alive, and to take over the nation that he leads. And instead of being a patchwork of lies and half-truths that is eventually pulled from under the audience’s feet, this story is all too true.

The film begins in North Africa, where Colonel Claus von Stauffenberg (Cruise) has been stationed, we gather, because he isn’t one of Hitler’s more enthusiastic officers. He is in the middle of discussing battle plans with a general — played by Bernard Hill, who asks “What would you have me do?” as though someone had handed him the script for The Lord of the Rings by mistake and asked him to play Theoden again — when Allied planes attack and leave Stauffenberg so wounded that, by the time he emerges from the hospital, he has lost an eye, a hand, and three fingers on the hand that remains. So he returns to Berlin and gets a desk job, where he worms his way into the upper ranks while plotting with his friends to bring the Fuhrer down.

It turns out that Stauffenberg’s friends have already tried on several occasions to assassinate Hitler, but their efforts have come to naught. And while these episodes have no doubt been massaged to produce as much cinematic tension as possible, much of what the film shows is true to life, at least in the basics, such as when Major-General Henning von Tresckow (Kenneth Branagh) plants a bomb on Hitler’s plane that fails to go off. When Stauffenberg joins Tresckow’s group, however, he insists that they change their approach. It will not be enough to simply kill the Fuhrer, he says, since one of the equally loathsome members of Hitler’s inner circle will take over for him and keep running the country into the ground. Instead, the conspirators must figure out a way to seize control of the country itself, the moment Hitler has been killed.

Enter “Operation Valkyrie.” The Nazis, it turns out, have a plan to keep the country going in the event that an Allied attack should succeed in killing Hitler, so the conspirators decide that their best chance is to get the plan revised in their favor, and then to implement that plan after they have killed Hitler. But the plan can only be revised with the Fuhrer’s permission — and the Fuhrer can only be approached through other officers who may or may not be suspicious of the conspirators.

So begins a tense, complicated series of plots and tricks, and on a certain level, it is amazing to see just how close the conspirators came to pulling off their plan. Not only does Stauffenberg succeed in getting Hitler (David Bamber) to sign the revised contingency plans, he also manages, after a false start or two, to plant a bomb under the table in one of Hitler’s conference rooms. If you are any sort of history junkie, then you have probably known about the bomb under the table for years — but it is still somewhat startling to see this historical detail brought to life, and to see Hitler himself get lifted into the air, just like any other man, when the blast goes off.

As we know, however, the blast does not kill Hitler; it doesn’t even wound him all that badly. But Stauffenberg doesn’t know this — when he sees the debris from the explosion, he takes that as a sign of success, period — so he and his fellow conspirators go ahead with the rest of their plan, using their own German troops to seize control of Berlin. For a few hours, everything seems to be going their way — but we know it is only a matter of time before the truth catches up with them.

To Singer’s credit, the film is remarkably suspenseful, even though we know pretty much how it will end. And why not? The best movies work even when we see them a second or third time, knowing all that is going to happen, and Valkyrie certainly has a few moments that will make audience members gasp when they see it for the first time, at least. What the movie lacks is some of the zest, the zing, that we might expect from a film billed as the reunion of the minds behind The Usual Suspects.

Also, the film doesn’t seem to draw any larger theme or purpose from its story; it just presents the facts, more or less, and lets them sit there. Such an approach would be fine for, say, a TV-movie, and this is such a fascinating story that I’m glad it has been told at all. But what is the audience supposed to take away from it? In a classic movie like The Killing, for example, the downer ending is a cynical joke, a reminder that we humans aren’t in control of our lives even though we think we are. Other movies might play the failure of the conspirators as tragedy, to show how these would-be heroes were brought down by personal character flaws.

Valkyrie, on the other hand, just tells us what happened — and while it doesn’t make a big cosmic point, it does present two facts, almost in passing, that a Christian viewer might want to process. First, Stauffenberg is a devout Catholic, and more than once, Singer draws our attention to the cross he wears around his neck (along with the wedding ring for which there is no longer a finger to wear it). Second, when Hitler survives the attack, he tells the German people that it was Providence which saved him. So where was God when the conspirators laid their plans, and then suffered for their failure? The movie doesn’t pursue the question, but it deserves some credit for acknowledging the role that faith did play in this story.

2. Colonel Claus von Stauffenberg says early on that it is possible to serve Germany or the Fuhrer, but not both. Why does he say this? When have you had to choose between serving a community — a nation, a church, a school –and serving its leaders? How can you tell when a leader should be disobeyed? How does that line up with Romans 13:1-7?

3. Is it possible to see the hand of God in this story anywhere? How do you respond when people like Hitler claim that Providence seems to be on their side?

Valkyrie is rated PG-13 for violence (planes attack a military base, a bomb goes off in a conference room, several people are executed by firing squads, and so on) and brief strong language (a few four-letter words).

December 24, 2008 Newsbites: The comics and heroes edition!
Recent Comments
0 | Leave a Comment
"This was a refreshing read. I'm an average fan of Hellboy but I'm also a ..."
Andrew Mathews Doug Jones on Hellboy and Christianity.
"Great interview! One thing I've wondered since watching Season 1 is why they didn't include ..."
A.J. Cattapan Interview: The Chosen writer-director Dallas Jenkins ..."
"Earth actually does exist in the Dark City universe. Early in the film when John ..."
Edward Clint Dark City and the ambiguous ending.
"I don't always agree with your opinions, but your reviews are never less than interesting ..."
Laura-Lee Rahn The top-grossing Italian movie of 2019: ..."
Browse Our Archives
Follow Us!